On March 11, 1958 an atomic bomb was mistakenly dropped on this location from a B-47E bomber in route to England for a training mission. Thankfully, the bomb was without its nuclear payload and no one was seriously injured. This historic marker is located near the crater created by the bomb's impact. 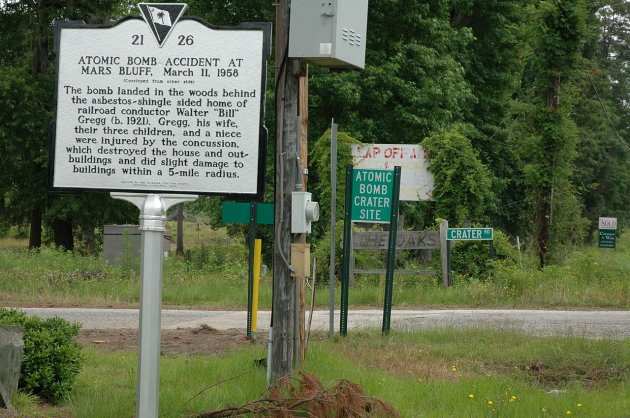 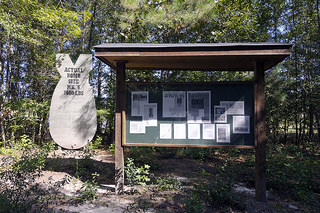 The B-47E bomber that mistakenly dropped a bomb on the city was in route to a Cold War training mission known as “Operation Snow Flurry." The plane was carrying a 7,600 pound MK-6 bomb, a more powerful version of the bomb dropped on Nagasaki.

The accident occurred due to simple human error. The flight navigator of the B-47E, Bruce Kulka, mistakenly grabbed the bombs emergency release mechanism while trying to inspect the locking pin of the bomb harness. Thankfully, the bomb’s nuclear payload, as was the protocol at the time, was not attached to the bomb and was stored in another location on the plane known as the “birdcage."

The bomb landed 15,000 ft. below on the property of Walter “Bill” Gregg. The impact from the blast created a mushroom cloud and a 50×70 ft. wide 25-30 ft. deep crater. Amazingly, no one was killed from the impact and those nearby suffered only minor injuries. There was, however, extensive damage to Mr. Gregg's home and surrounding property

U.S. military planes often carried nuclear weapons during the Cold War as part of the military's strategy of deterrence. According to the concept of "second-strike capability," by having an arsenal of planes, ships, and submarines that were armed with nuclear weapons and scattered throughout the globe, it would be impossible for an enemy power to strike the US in a way that prevented the military from retaliating against that enemy. This accidental release of a bomb over an American city is only one of over a thousand significant accidents that occurred with nuclear weapons between 1950 and 1968.

Although a historic marker near the site marks the accident, the crater-is located nearby on private property and is only accessible with permission from the landowner.

Artifacts from this accident, including bomb fragments, are on display in the Florence County Museum’s Pee Dee History Gallery.