Washington Crossing Bridge, also known as the 40th Street Bridge, crosses the Allegheny River and connects the neighborhood of Lawrenceville with the suburb of Millvale. The bridge was built between 1919 and 1924 at a cost of $2,344,904. At the time of construction, this bridge was built to handle two lanes of traffic plus a street car line. In 1982, the city removed the street car line and added a reversible third vehicle lane.

Overhead shot of the bridge. 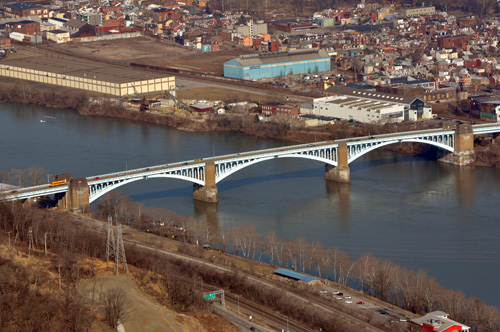 Shot from below the 40th Street Bridge. 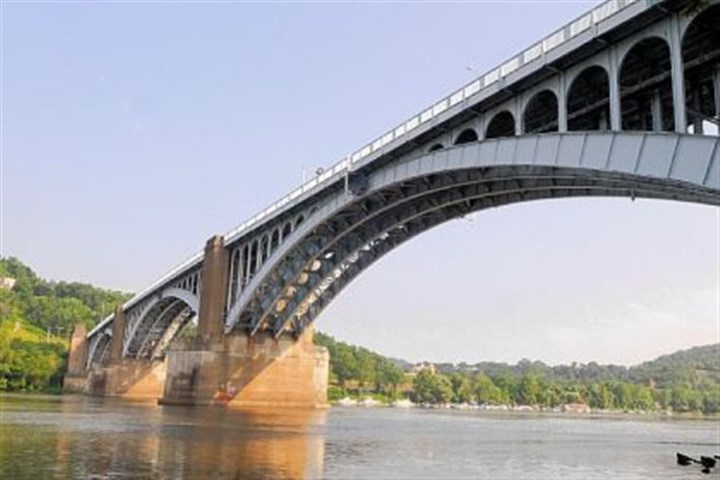 One of the bridge's supporting pillars. 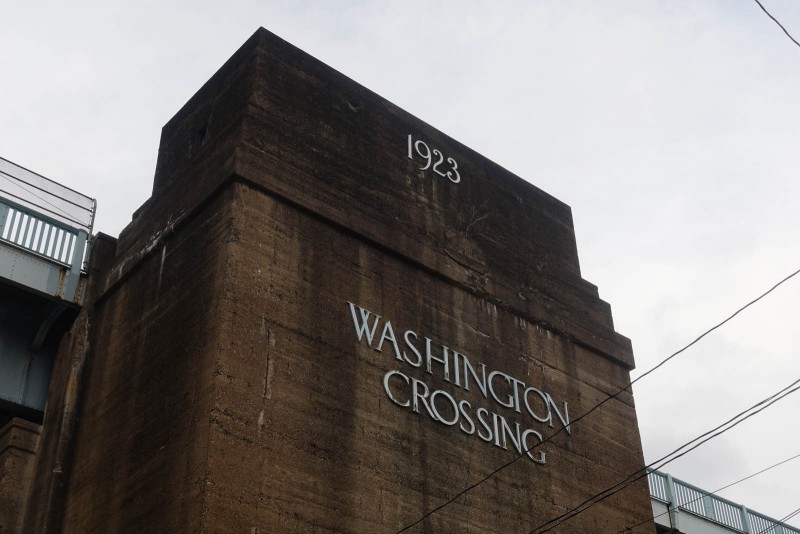 The  40th Street Bridge is often referred to as the "Washington Crossing Bridge" owing to a decision of a young Major George Washington, who was on his first diplomatic mission from Governor Dinwiddie of the British Crown colony of Virginia. Washington was sent to the area to pass on a message to French forces, suggesting that they negotiate for the return of the lands that today make up Western Pennsylvania or face military action from the British.

While crossing the Allegheny River on a raft, Washington was thrown into the water when the pole he was using to guide the raft was hit by a chunk of ice. Unable to reach either shore, he and his guide, Christopher Gist, abandoned the raft and landed on an island near mid-stream. This island, was known as Wainwright's, McCollough's or "Good Liquor" Island, has long since disappeared. Although it no longer exists, it may have saved Washington's life on December 29, 1753.

After Washington returned from his expedition to the French commander at Fort Le Boeuf, and he gave his report to Governor Dinwiddie, the House of Burgesses of Virginia made a grant of 10,000 pounds to protect the frontier. Washington, who had been stationed at Alexandria, to enlist recruits, received his commission as a lieutenant-colonel along with orders from Governor Dinwiddie, to take 150 men and take command at the forks of the Ohio, to finish the fort already started there by the Ohio company and to make prisoners, kill or destroy, anyone who interrupted the English settlements. Officers and men were promised 200,000 acres of land on the Ohio, as a special incentive.

Because of this historically significant site "Washington Crossing" was the name selected for this bridge This name was submitted with many others to the county commissioners, William H. Stevenson, chairman of the Pennsylvania Historical Commission, Pittsburgh is proud of its connection with the early career of Washington, who later commanded the armies of the colonies in the successful struggle for independence.

Mounted on the wall below the southwest obelisk, a plaque reads:
GEORGE WASHINGTON
A messenger from the Governor of Virginia to the
commandant of the French forces on the Ohio
and CHRISTOPHER GIST, his guide
crossed the Allegheny at this point
on December 29, 1753
on the return journey from Fort LeBoeuf.
Placed by the Pittsburgh Chapter
Daughters of the American Revolution
1926