Constructed in 1937 under the leadership of Mason and community leader John Wesley Dobbs, this building was home to one of the most important secular organizations in Atlanta's Black community. Dobbs used this building as his headquarters throughout the 1930, 40s, and 50s, a time when he negotiated with the city's political leaders on behalf of the city's African American residents. The building was also the home of WERD radio in the 1950s. Established in the 1920s, WERD was the first Black-owned raido station. The building later housed the Southern Christian Leadership Conference, the civil rights organization formed by Dr. Martin Luther King Jr. 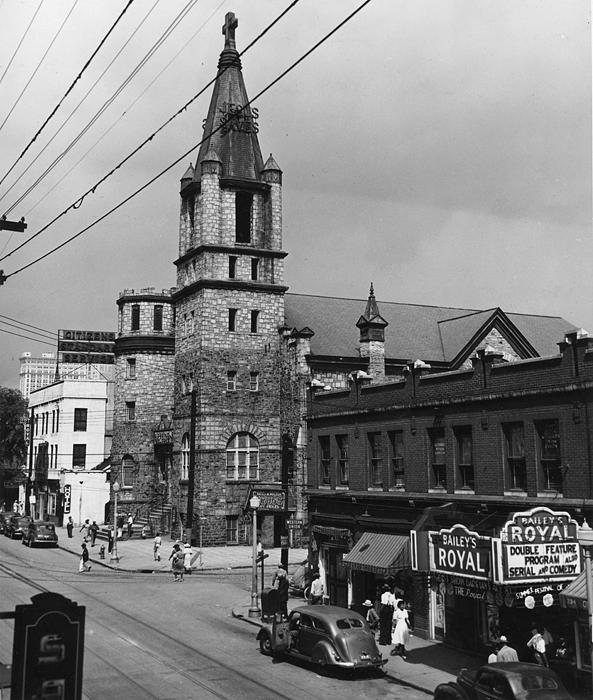 Buildings on Auburn Avenue in the Sweet Auburn Historic District 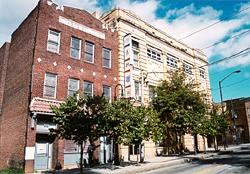 The Sweet Auburn Historic District, located along a 1.5 mile stretch of Auburn Avenue in downtown Atlanta, highlights the history and achievements of Atlanta's African American population. Civic leader and activist John Wesley Dobbs, the unofficial mayor of Auburn Avenue, referred to the area as the "richest Negro street in the world" and the district subsequently became known as "Sweet Auburn." A number of historic places are located within Sweet Auburn, including the King Center for Non-Violent Social Change, Ebenezer Baptist Church, MLK Jr.'s birth home, the Royal Peacock, and many more.

The Sweet Auburn Historic District is located along Auburn Avenue in downtown Atlanta. Though it is only a mile or so long it is filled with sites important to African American history.
The name Sweet Auburn comes from John Wesley Dobbs who also called it the "richest Negro street in the world." Sweet Auburn formed in the era of Jim Crow laws that forced African Americans out of other parts of town.  Most businesses in the South would not allow African Americans to work or receive equal services, so some entrepreneurs formed their own businesses.  One of the most important of these was the Atlanta Life Insurance company.
Alonzo Herndon began the Atlanta Life Insurance Company in the Sweet Auburn neighborhood.  Herndon ran barber shops in Atlanta and developed a considerable string of businesses.  He invested in real estate and by 1900 owned more property than any other African American in Atlanta.  He became Atlanta's first Black millionaire after founding the Atlanta Life Insurance Company.
Dr. Martin Luther King Jr's home church, Ebenezer Baptist Church, and his birth home are both located in this historic part of town as well.  Several other sites in the area, including King Center for Non-Violent Social Change, Center For Civil And Human Rights, and The MLK Jr. National Park pay homage to this great historic leader.  King was born here in 1929 and named Micheal Luther King Jr, later changing his name. King's grandfather served as pastor of Ebenezer Baptist Church from 1914-1931 when King's father took over the role. King graduated from a segregated high school at the age of 15 and earned his B.A. from the historically Black Morehouse College in 1948.  In the early 1953 King married his wife, Coretta Scott King, and in 1954 he became a minister of Drexel Avenue Baptist Church in Montgomery, Alabama.  It was in highly segregated Montgomery that King gained notice for his work with the National Association for the Advancement of Colored People.  King's leadership in non-violent protests in the 1950s and 60's changed the country and the world.  Dr. Martin Luther King Jr was tragically assassinated on April 4, 1968 in Memphis, Tennessee.
The Sweet Auburn district is also home to the Royal Peacock Club, a historic cultural hub of African American life in Atlanta.  The club has been known as The Top Hat Club and Club Beautiful in its past but has continued running in some incarnation since the 1920s.  Such musicians as Ray Charles, Marvin Gaye, Aretha Franklin, Dizzy Gillespie, Bessie Smith, Louis Armstrong, B.B. King, the Supremes, and Gladys Knight and the Pips all played the Royal Peacock, and celebrities such as Joe Loius, Jackie Robinson, and Muhammad Ali could be found there when in Atlanta.  During the Royal Peacock's history in the 1950s, Wednesdays and Saturdays were reserved for whites only and the former owner ran a hotel for visiting Black performers who would not be able to stay in white-only hotels.