St. Paul’s African Methodist Episcopal was constructed between 1906 and 1913. Although dwindling membership led the congregation to move from this large building in 2010, the congregation remains the oldest in Tampa's black community. This structure has been converted to hold offices as well as apartments.

This brick Gothic Revival-style building was completed in 1913 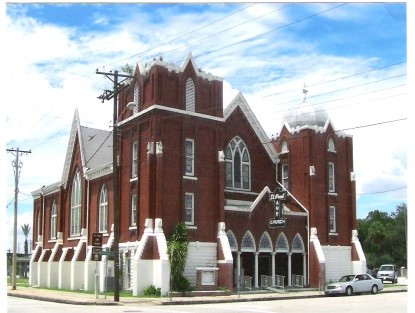 Established in 1870 by Reverend Thomas Warren as Brush Harbor Mission, this congregation built their first church structure in 1872. This church was located on Marion Street and opened as Mount Moriah African Methodist Episcopal Church before changing its name to St. Paul.

During the 1950s and 1960s, the congregation and this church were the center of civil rights activism. Paul Robeson, Jese Jackson, and Supreme Court Justice Thurgood Marshall have all delivered addresses from St. Paul's pulpit. Dr. Martin Luther King traveled to Tampa in November, 1961, meeting with St. Paul members and leaders of the civil rights movement to discuss their vision for the Civil Rights movement in Florida.