This former Baltimore & Ohio Railroad depot was built in 1887, and served Huntington until the mid-1960s. Concerned citizens worked to preserve the historic railway station during the late 1960s and early 1970s. In 1973, the B&O depot was placed on the National Register of Historic Places. With the support of the Urban Renewal Authority, the facility was repurposed in 1977 as Heritage Station, a center for artisans and other retail outlets. Today, Heritage Station is a hub for local businesses and events, while the original depot building serves as the headquarters for the Huntington Area Convention & Visitors Bureau. In front of the Depot stands the Elk River Coal & Lumber Company #10 Steam Locomotive, also on the National Register of Historic Places. 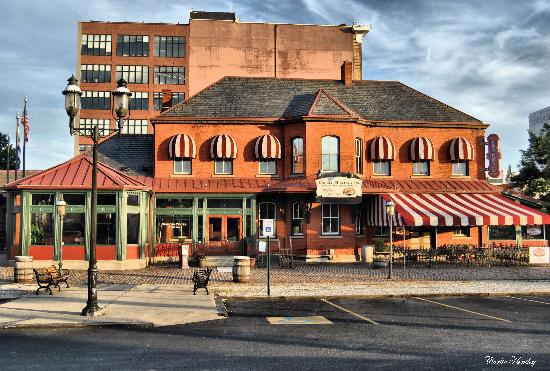 Passenger train pauses in Huntington, 1956. Seems as if a grandfather has come to town for a visit, while a Railway Express Agent unloads packages. Photo by Herbert H. Harwood, Jr., from the Bob Withers Collection. (2013). 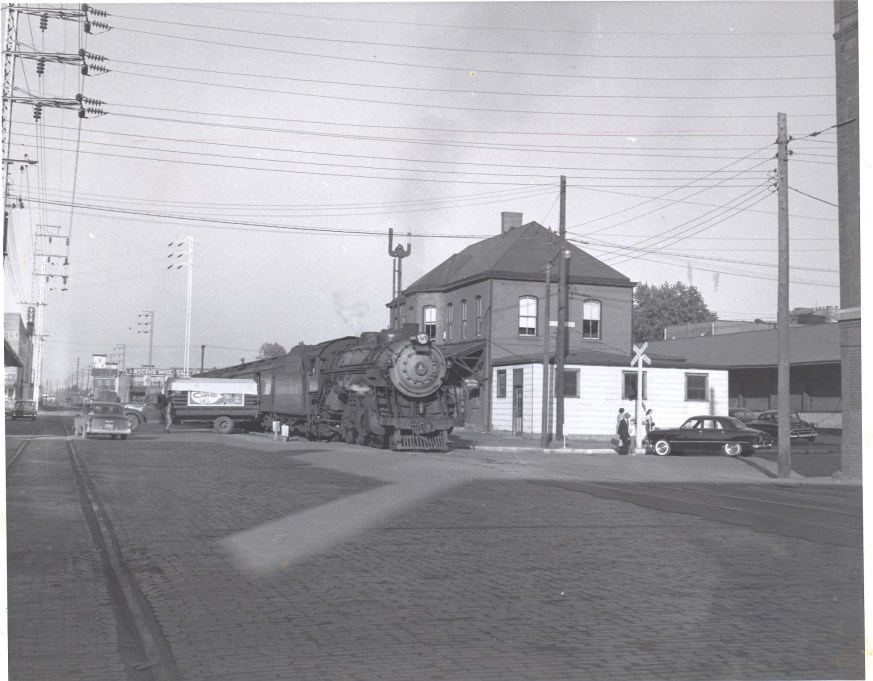 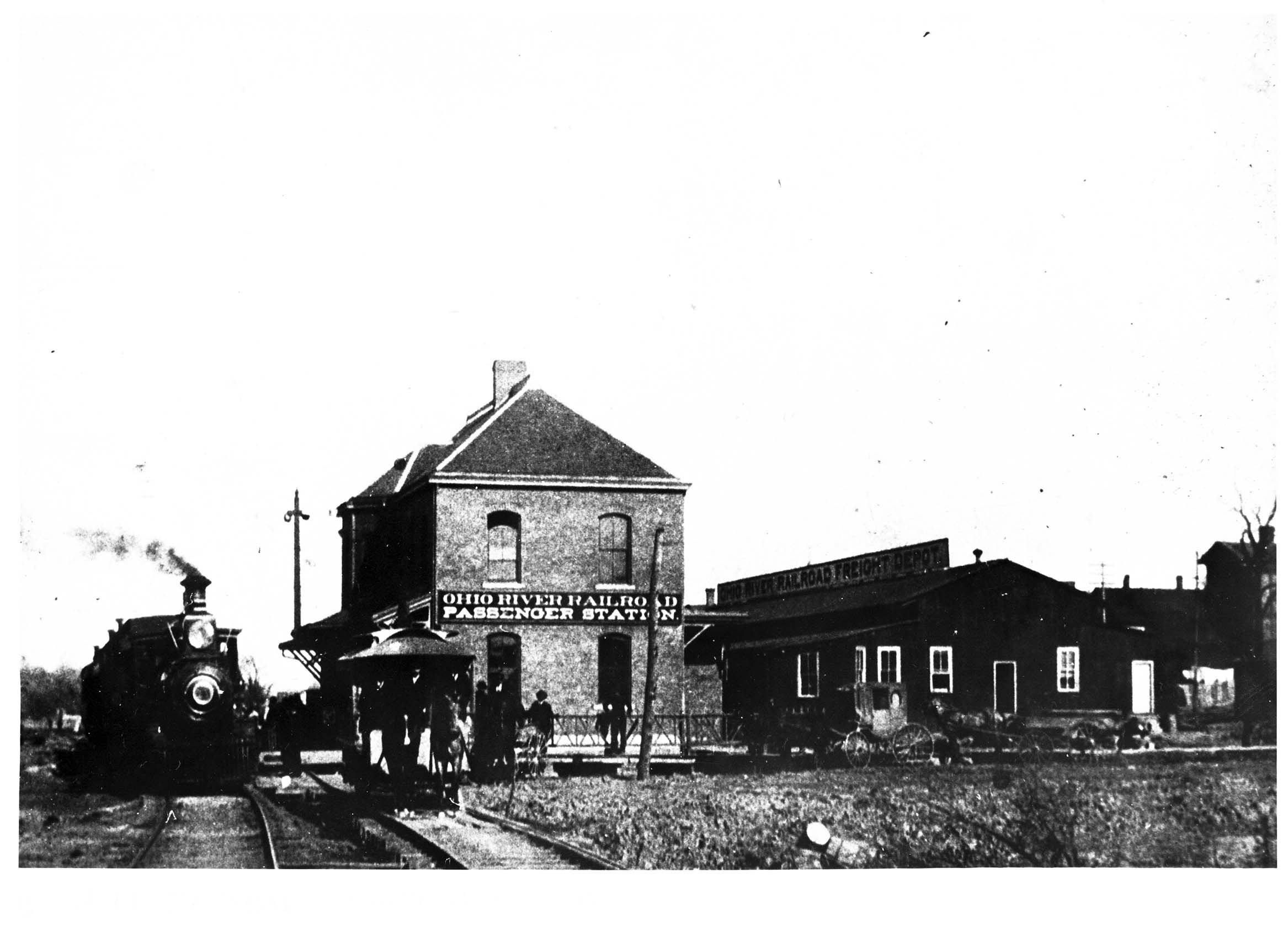 Elk River Coal & Lumber Company #10 Steam Locomotive. It's location has been slightly changed since the 2006 nomination. 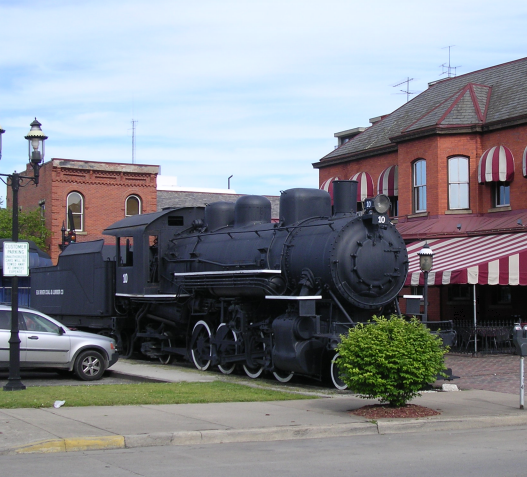 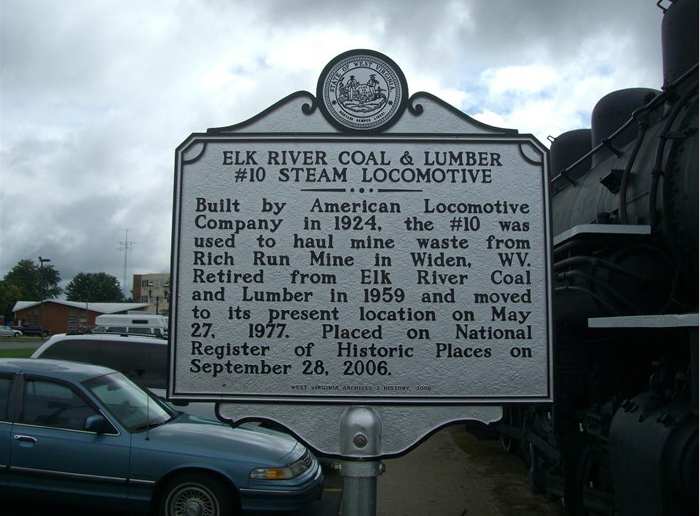 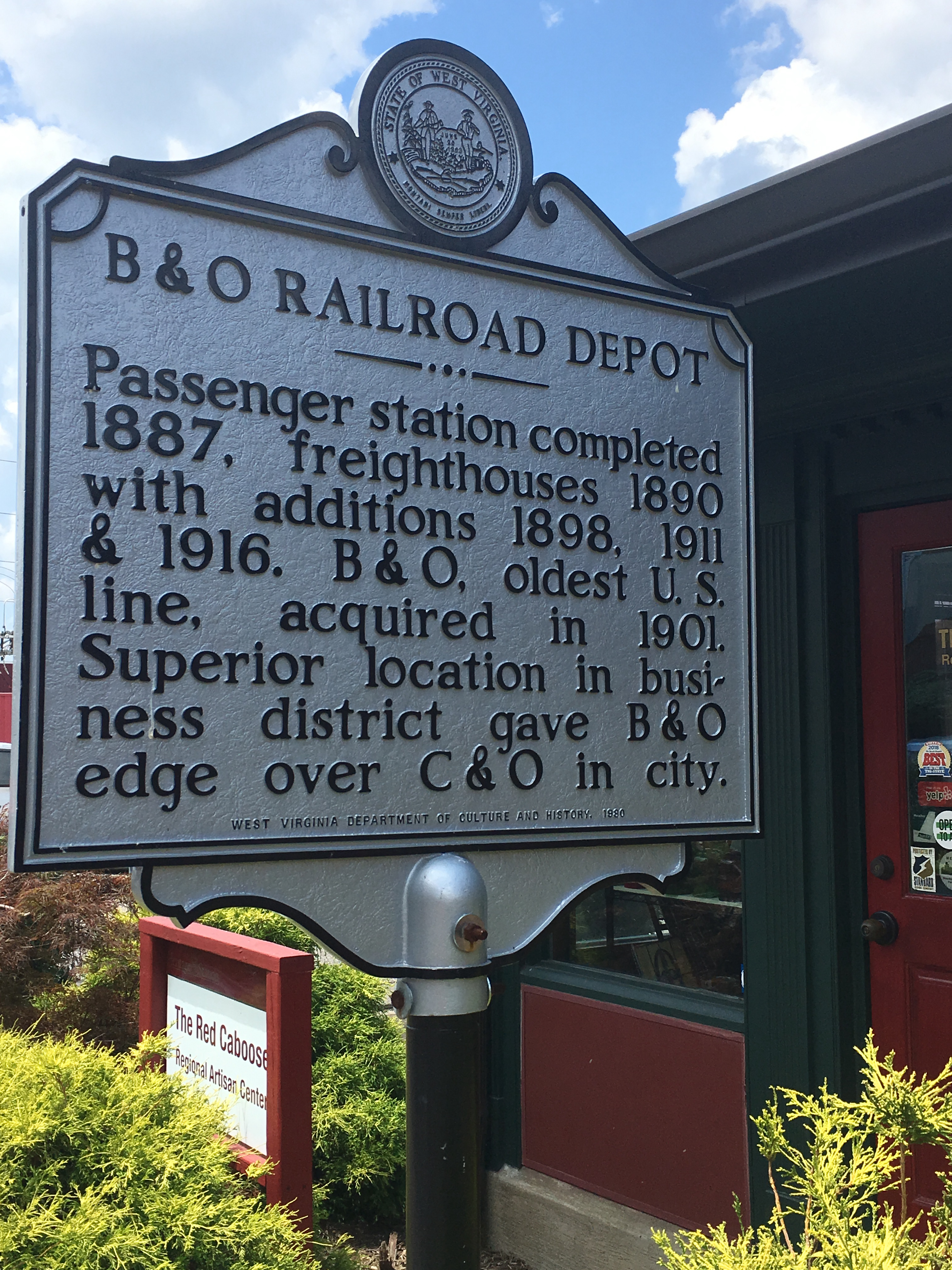 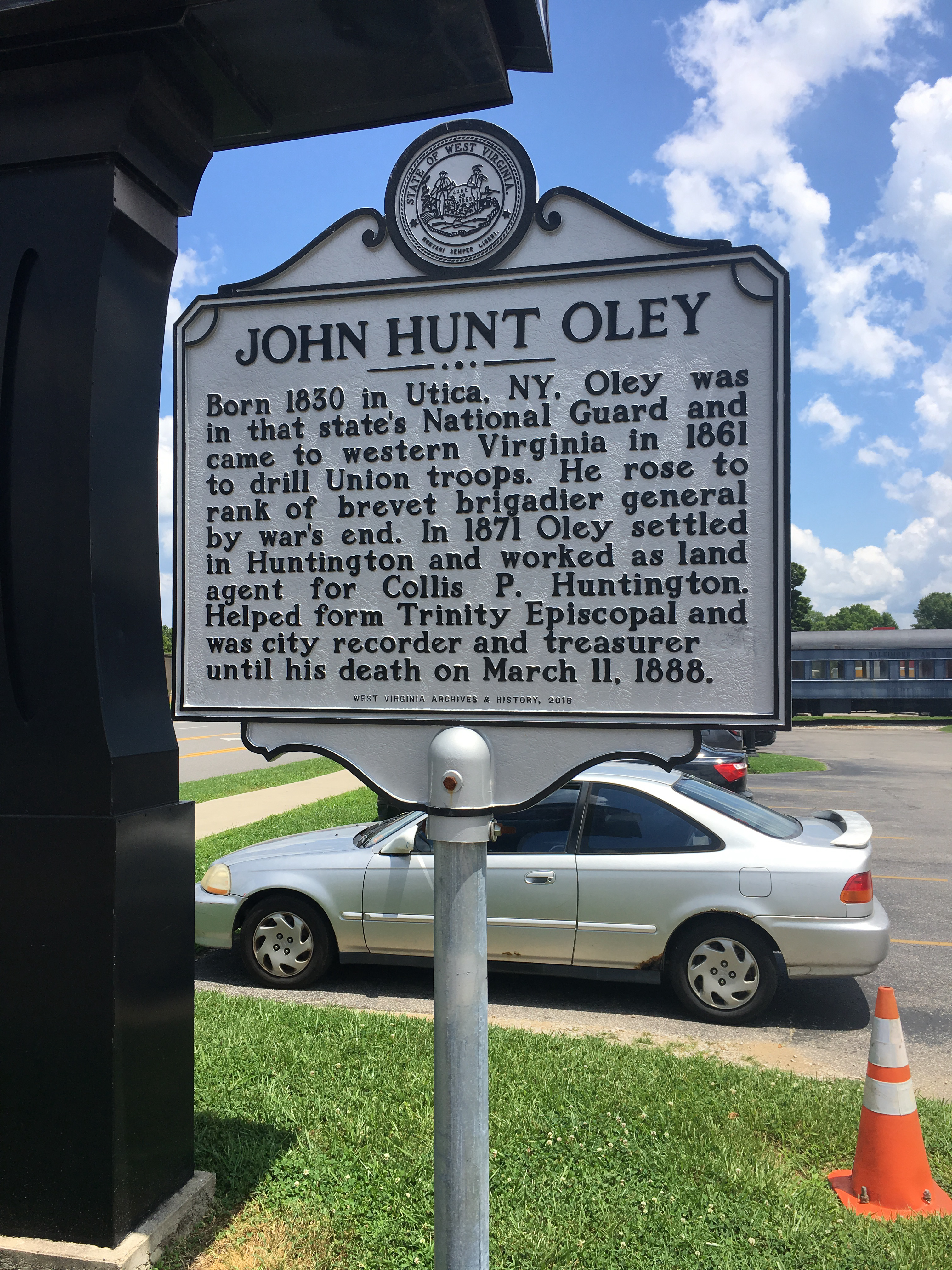 Historical Marker for Heritage Station; it was originally known as Heritage Village when it first opened. 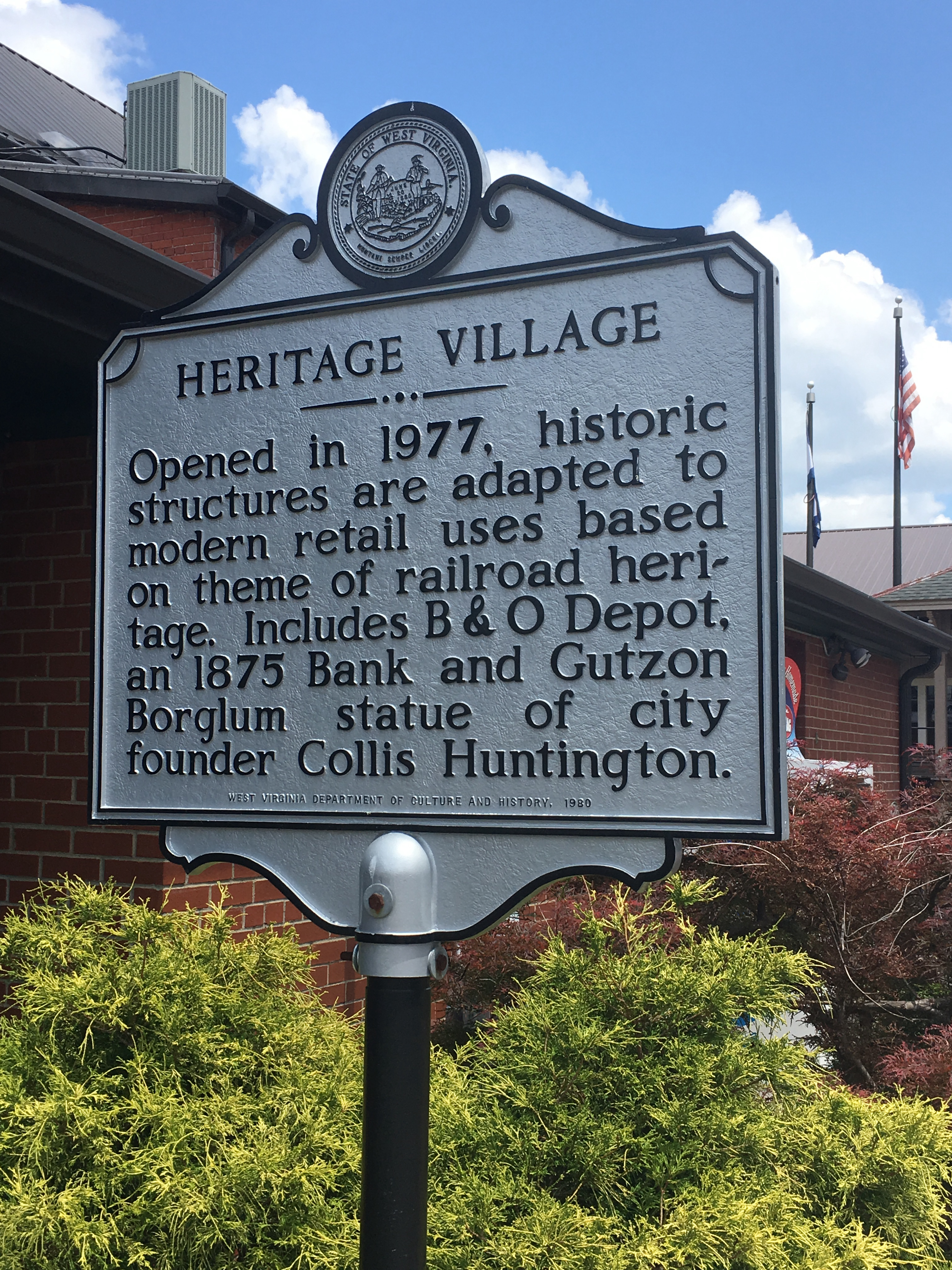 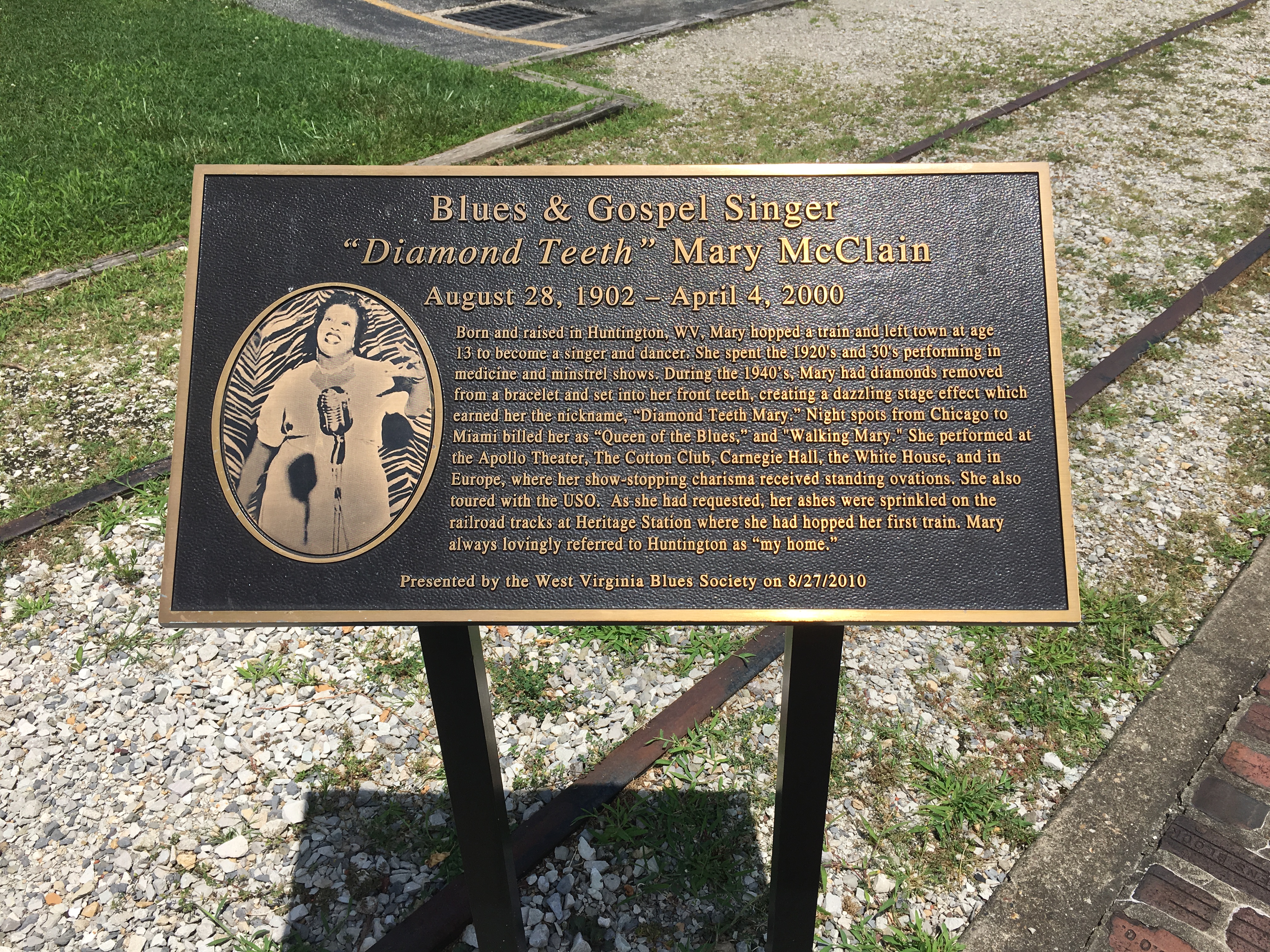 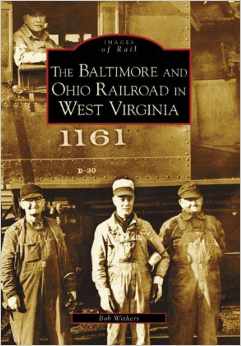 Huntington, West Virginia was historically known as a thriving railroad town thanks to Collis P. Huntington, the Chesapeake & Ohio Railroad (C&O), and the Baltimore & Ohio Railroad (B&O). Originally, Huntington served as the westernmost depot on the C&O Railroad, which traveled south through the coalfields and into Richmond and Newport News on the East Coast. Collis P. Huntington chose this location along the Ohio River so that the steamboat and railroad systems could link together, thus making Huntington a boom town in 1871. The B&O depot was constructed in 1892, when the B&O line was extended into the city. The extension of the B&O, coupled with the C&O and the Ohio River, made Huntington a major regional destination for travelers and trade.The first B&O train departed Huntington on August 10, 1892.

The B&O depot made news in December 1892, when Tom Collins and Burrell Forgey boarded a train at the site and attempted to rob it. At 16th street, Collins and Forgey put their masks on and began shooting at the ceiling of the train car. Passengers listened to the robbers’ demands, all except Oscar Dic, who attempted to disarm one of the robbers. Captain Samuel Mathison, Chairman of the Democratic State Executive Committee, attempted to help Dic. When Mathison and Dic took the pistol away from one robber, he pulled out another gun and shot Dic point blank in the face. The other robber was shooting at the end of the train car as W. A. Zingerly, the train ticket collector, appeared and began shooting at the robbers. Both robbers were shot, but they were able to pull the bell-rope and jump off at the Guyandotte Station. The escaped robbers were caught three days later in Bradrick, Ohio, just across the river from Huntington. Collins and Burrell were sentenced to twelve years in the state penitentiary.

By 1900, the B&O trains arriving and departing from the depot were carrying passengers, mail, and freight. The B&O Railroad profited from the coal industry so much that it allowed them to expand and give Huntington passengers access to thirteen different states by 1917. The railroad industry was wildly popular in the community during the 1920s, and became the most utilized form of transportation as the majority of Huntington residents did not yet own cars. However, when the Great Depression struck in the 1930s, service at the Huntington depot was reduced to only two trains daily. World War II once briefly revived the industry in Huntington as war supplies were carried by trains and gas rationing led to an increase in passenger usage.

Passenger train use declined once again in the post-war era, and the popular Pullman Cars were slowly phased out; nighttime trains stopped running in 1953, and all daytime passenger trains were halted in 1957. One of the Pullman Cars now sits on the Heritage Station property. The collapse in passenger train popularity was due primarily to the availability of automobiles and the construction of the interstate highway system. Freight trains still passed through the Huntington Depot until the line was closed in 1965. Afterwards the depot sat empty until 1977, when the Urban Renewal Authority started to restore the entire train station so that it could be re-purposed as an artisan center. It opened as Heritage Station, a retail facility offering spaces for new local businesses and artisans. Since the 1970s Heritage Station has hosted numerous shops, restaurants, and community events. The original depot building houses the Huntington Area Convention & Visitors Bureau, which promotes tourism in the local area.

In front of the Depot stands the Elk River Coal & Lumber Company #10 Steam Locomotive, also on the National Register of Historic Places. This locomotive operated on the Buffalo Creek & Gailey Railroad between 1950 and 1959, largely carrying mine waste from Rich Run Mine (Walden, WV) to a “gob pile” (a pile of material removed while digging) a short distance away. #10 was taken out of service in 1959 and placed in storage for a few years before being given to the Huntington Railway Museum, Inc./Collis P. Huntington Railroad Historical Society, Inc. in 1963. CPHRHS moved the locomotive to Huntington and put her into storage at the Chesapeake & Ohio’s Huntington Locomotive Shops. When Heritage Station opened in 1977 the locomotive was moved here, and ownership passed to The Greater Huntington Park and Recreation District that same year. Originally, #10 was repainted to represent a Baltimore & Ohio locomotive with the number 4559 to represent the last B & O steam locomotive to operate in Huntington, but that was an incorrect designation. The engine was restored in 2000 and its correct ERC&LC #10 lettering was repainted. The #10 locomotive was placed on the National Register of Historic Places in 2006.