Previous known as the Eagle Bay Hotel, this site is the place of historic events that relate to the history of the town and the Fulton Chain of Lakes. The Eagle Bay Village has now taken the place of the Hotel. This area of the Adirondacks is known for it's large reliance on the tourism industry and the town of Eagle Bay where this site is located, is a great example of the impact tourism has on this area. The Eagle Bay Village Chalets currently span over a large area of the waterfront in the town, located on fourth lake. Fourth Lake is the fourth of the eight lake chain in this region of the Adirondacks. At the Eagle Bay Village development, there is a small motel on the water, with ten cottagges, and five larger houses, all avalibily for rent by tourists and year vacationers.

The Eagle Bay Hotel before it burned to the ground in 1944. 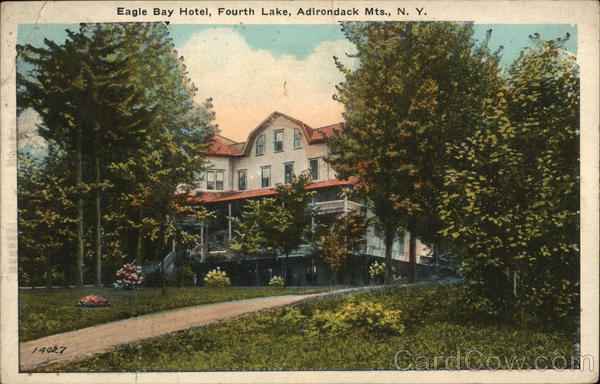 The town of Eagle Bay in 1914, with the previous hotel still standing. 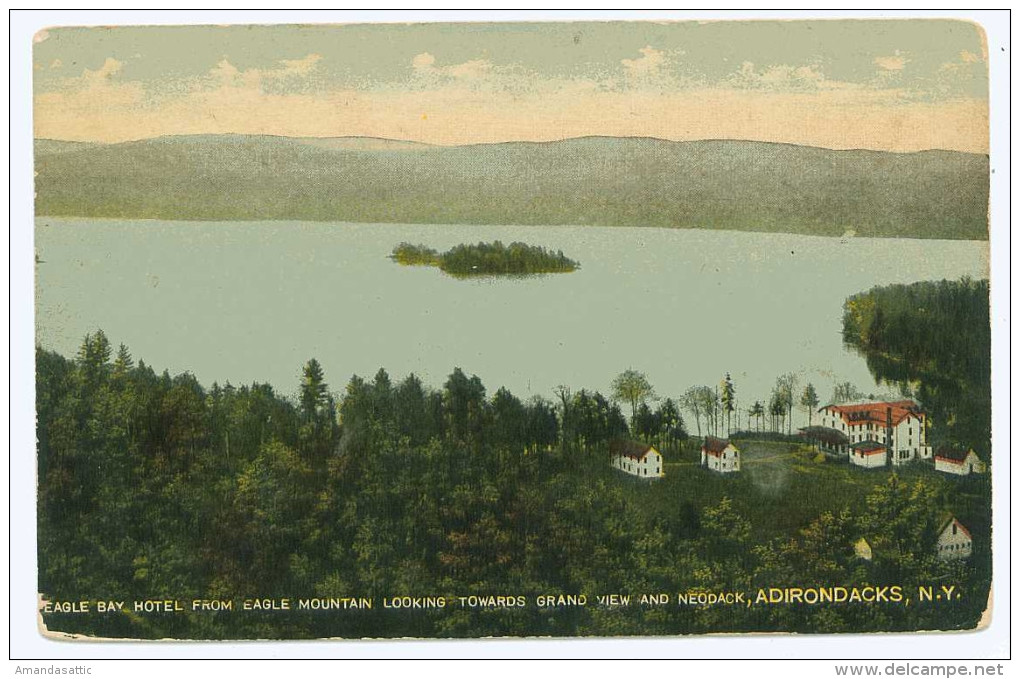 The current view of the beach front of the Eagle Bay Chalets with the small motel. 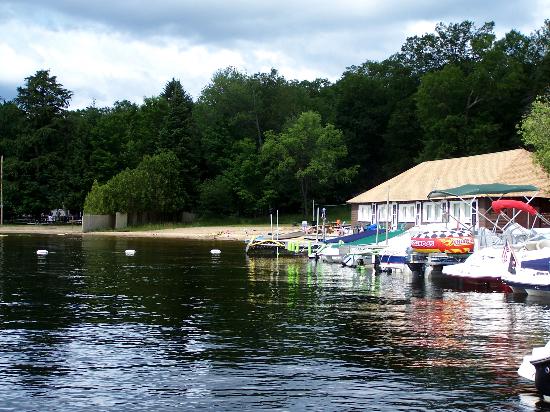 These ten cottages are located on the land where the old hotel used to be located. The buildings can house up to five people at a time. 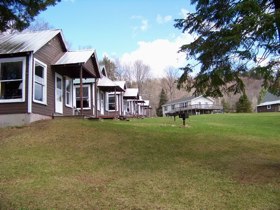 The historical significance of this area stems from the previously standing Eagle Bay Hotel, being the first of its kind on the Fulton Chain. It was built in 1895, by Dwight Sperry, to help bring tourists up the Fulton Chain of Lakes, and bring a flow of money to the struggling and low inhabited area. The hotel then became a destination for many Americans traveling to the Adirondacks, and it grew into a hub for tourism. The casino and train station were added in the ten years after the hotel opened but have since shut down. The motel on the water at the Eagle Bay Village has now taken the place of the casino, and the remaining businesses in the town are a corner store and a local bar.
After the hotel burned down, the tourism hub of the Adirondacks moved to the town of Old Forge and Eagle Bay has yet to be restored to it's former tourism industry glory. However, it is still a great place to vacation with your family and fourth lake is a wonderful place to enjoy the beauties that nature has to offer. the town of Eagle Bay is nestled in between many beautiful mountains such as Rocky Mountain and Bald Mountain. Its closest neighboring town in Inlet, New York, which is the closest grocery store and gas station.
Eagle Bay has gone through many changes over the years, and after the hotel burned down, the town itself focused on creating a welcoming environment for vacations to build their own camps, to help develop the area and create more permanent living in the summer. The five large houses on the Eagle Bay Village property are available for rent for the entirety of the summer and are usually always booked.
Due to the history of the site, the town has not allowed for commercializing of the area, because the town has been known for it's wilderness feel and that is why the hotel and the new Eagle Bay Village development were and are successful. Most people visiting the area, are not looking to stay in a modern hotel, but rather a lake house at which they and their family can thoroughly enjoy the beauties of the Adirondack park. The Fulton Chain in it's entirety, has tried to stay away from commercialized hotels and houses, because they take away from the rustic feel of the area. You will not find any modern hotel all throughout the lakes but you will find hotels the came about very shortly after the Eagle Bay Hotel was built and that are still open to this day. Without the opening of the hotel, many believe that the area would still be home to a very few cottages and that the amount of tourists who venture up to this area would be much less.Eagle Bay and it's residents credit the development and success of the town and area to the Eagle Bay Hotel. The realize it's significance in history and in the museums in Inlet and Old forge, one can find a long history of the many quests the visited and returned many times to the beautiful Eagle Bay Hotel.