View of the Keith Albee stage 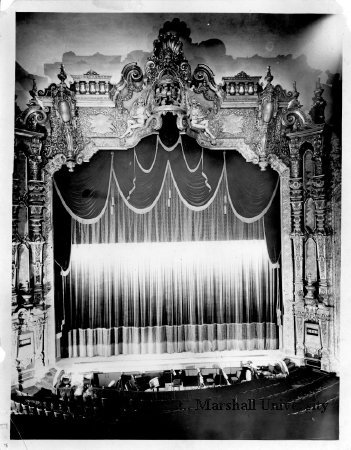 Advertisement for the theater's opening day 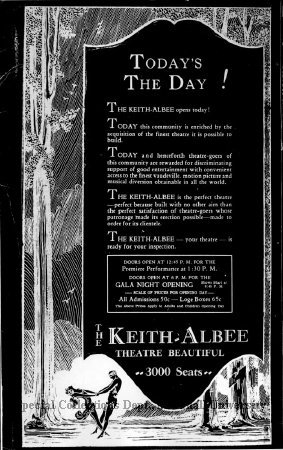 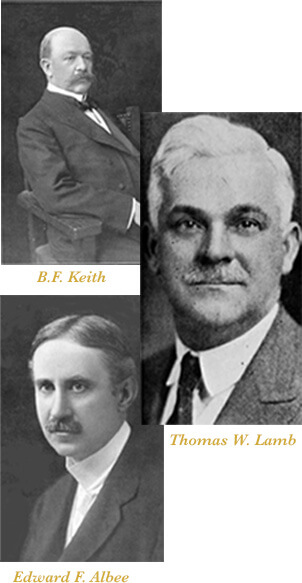 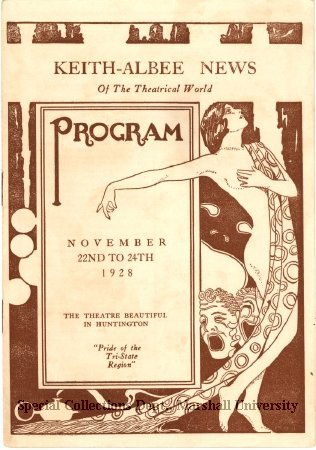 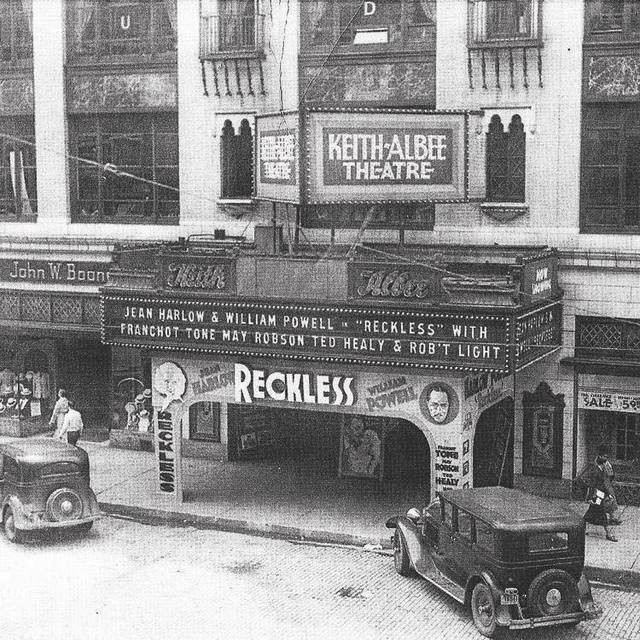 The Keith Albee during the flood of 1937 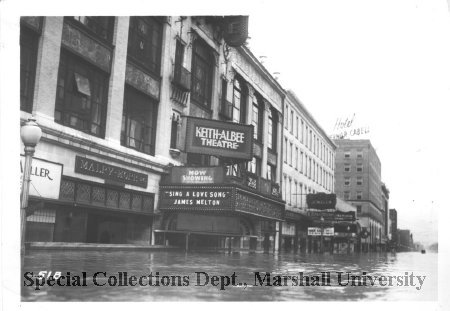 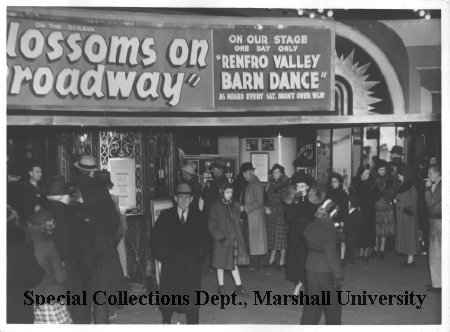 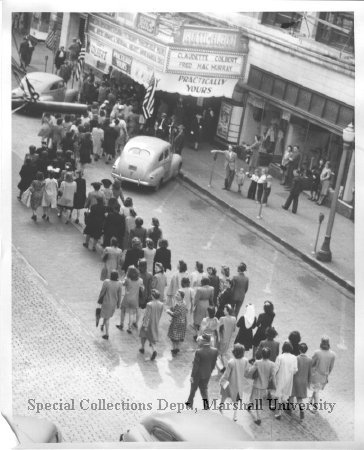 The exterior of the theater, circa 1950s 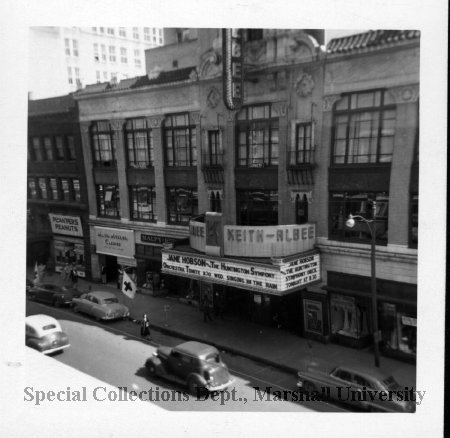 The Keith Albee at night, circa 1960s 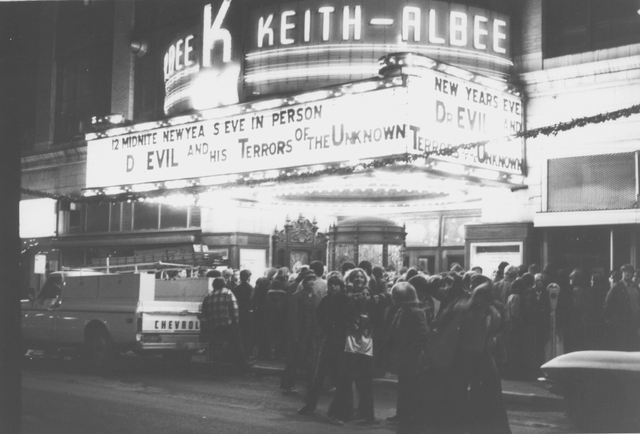 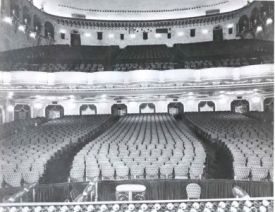 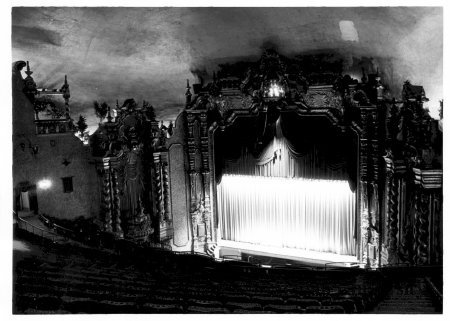 The Keith-Albee Theatre in downtown Huntington, West Virginia opened to the public on May 7, 1928. Brothers A. B. and S. J. Hyman built the Keith Albee, with Thomas Lamb as the architect, and added it to their list of theaters along with the State, Orpheum and Huntington. The new theater was constructed under the supervision of vaudeville tycoons B. F. Keith and Edward Albee. The theater became part of their Keith-Albee circuit, the premier vaudeville tour on the East Coast of the United States. American vaudeville was a type of theater performance that was popular from the 1880s to the 1930s, that showcased different specialty acts such as comedy and burlesque. The Scottish-born architect Thomas W. Lamb designed 153 other theaters around the world; unfortunately, only forty-three of these theaters are still open. Seventy-one have been demolished, and the rest will depend upon preservationists for restoration or they will share the same fate.

The Keith Albee includes the atmospheric elements that became popular in the largest theaters of the day. The ceiling is designed to resemble the night sky, complete with small lights that were placed in the ceiling to resemble stars. The design also implements intricate gold plasterwork, chandeliers, smoking rooms, and fireplaces in the bathrooms. Lamb exceeded his original $250,000 budget to over two million dollars, which was quite a sizable sum in 1928.The Keith Albee Theater was dubbed a “temple of amusement” by Huntington’s Herald-Dispatch newspaper. In addition to its famous name, the theater boasted the most luxurious modern accommodations, with a new ventilation system, Wurlitzer organ, 8-piece orchestra, and about 20 ushers with their signature red and gold uniforms. The opening day performance on May 8, 1928 featured performer Rae Samuels, nicknamed the “Blue Streak of Vaudeville” for her versatile acting ability..

Due to the decline in vaudeville in the 1930s, the Keith Albee started running movies to turn a profit. During this time period, many of these types of movie palaces were torn down or demolished because they could no longer sell tickets and fill seats. The Keith Albee survived the flood of 1937, but changing habits of consumers were more difficult to overcome. Television took a toll on the theatre, and by the 1960s and 1970s plans were in place to convert the large auditorium into three separate movie theaters. Efforts were made by local organizations, such as "Save the Keith," but the theater would be split up anyway with a fourth theater added in a conjoining retail space. The plans were carefully made so that the splitting of the auditorium could be easily reversed, as it was during later renovations. By 2006, the Keith Albee stopped running as a movie theater due to financial woes caused by a larger and more modern movie theater that opened in Pullman Square just two blocks away. The Keith Albee was transferred to the Marshall University Foundation and continues to be the home of the Marshall Artist Series. Since then, renovation projects have been in place to slowly revert the theater back to its original glory. The project has a goal of full restoration by the theater's 100th Anniversary.

The Keith Albee is a staple in the history of the Huntington area. It is home to the beloved Marshall Artist Series and it has hosted a few notable film premiers such as "We Are Marshall" and "Rain Man." The theater represents a time period when a trip to the vaudeville palace was a grand event and a time when a trip to a movie palace acted as an escape from reality during hard times. The design and architecture of the building is very unique and represents an important era of theater architecture history.