One of St. Petersburg's original resorts, this property was designed by architect Henry L. Taylor for businessman and real estate developer Aymer Vinoy Laughner. The resort opened on New Year's Eve in 1925. Although the hotel was completed just as the real estate boom of this part of Florida was ending, the hotel had little difficulty in the booming years of the late 1920s as railroads brought thousands of vacationers to the hotel each month. The hotel survived the Great Depression owing to the large numbers of wealthy families that could still afford to travel, but the boom years of the 1960s signaled its decline as many travelers preferred to travel by automobile and staid in newer and less-expensive hotels along the interstate. By the 1970s, the hotel was vacant and would have been demolished in 1984 had it not been for the efforts of preservationists who worked with the and private developers. After being vacant for nearly two decades, the fully-restored Vinoy re-opened in 1992.

Thanks to the efforts of preservation-minded citizens who worked with local government to attract investors, this historic hotel was saved from demolition in 1984. 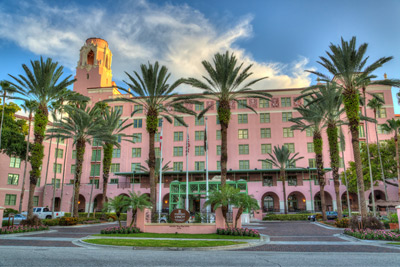 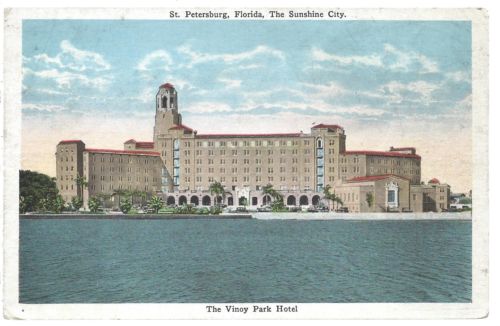 The interior of the hotel now blends modern furnishings with the hotels signature arched terraces.

This aerial view of the Vinoy in the late 1920s demonstrates the way that Saint Petersburg grew as a direct result of the construction of major hotels like the Vinoy. 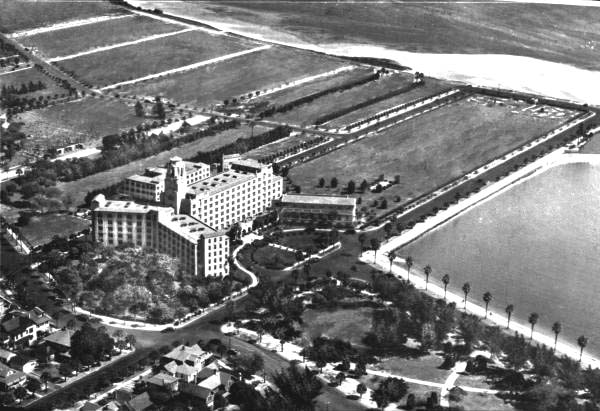 This historic hotel opened in 1926, but its history dates back to a 1923 golf match between Walter Hagen and Pennsylvania businessman Aymer Vinoy Laughner. Hagen was one of the game's greatest players of the early 20th century, and as the story goes, he bet Laughner that he could drive a golf ball so hard it would break the face of his pocket watch. The watch and Laughner won the bet. The pair took turns driving balls in what was then a mostly-undeveloped section of St. Petersburg. As they retrieved the balls, they both agreed that the area would make an excellent location for a resort. Laughner purchased the land and constructed the Vinoy Park Hotel from February to December 1925. The grand opening of the hotel on New Year's Eve was one of the grandest of the city.

Like many large hotels and resorts, the Vinoy was leased by the Department of Defense during World War II. From 1942 to 1944, over a hundred thousand military members and civilians were trained to become cooks and bakers for the military at the Vinoy. The hotel re-opened for civilian guests at the end of 1944. Famous guests include Babe Ruth, Presidents Herbert Hoover and Calvin Coolidge, and Marilyn Monroe and Joe Dimaggio.