This National Park Service Visitors Center interprets and shares the history of the Battle of Kings Mountain, one of the most decisive battles during the American Revolutionary War. It was here on October 17, 1780 that American revolutionaries led by Col. William Campbell fought a contingent of American Loyalists under command of Major Patrick Ferguson. The Patriots defeated their Loyalist brethren in under an hour. The British loss at Kings Mountain set in motions the events leading up to the American victory at Yorktown on October 19, 1781. The federal government established the location of the Battle of Kings Mountain as a National Military Park on March 3, 1931. The park continues to preserve, promote, and educate the public about this significant event in American history. Since 1909, yearly commemorations of the battle have taken place either on the battleground or in the City of Kings Mountain.

An engraving depicting the death of Major Patrick Ferguson 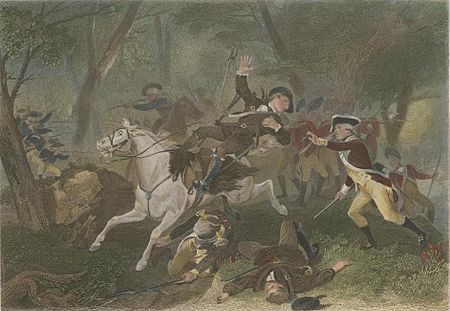 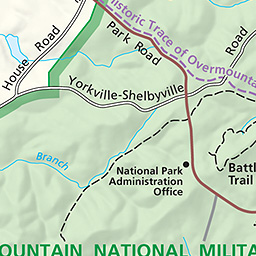 The remains of an old road from the Colonial Era 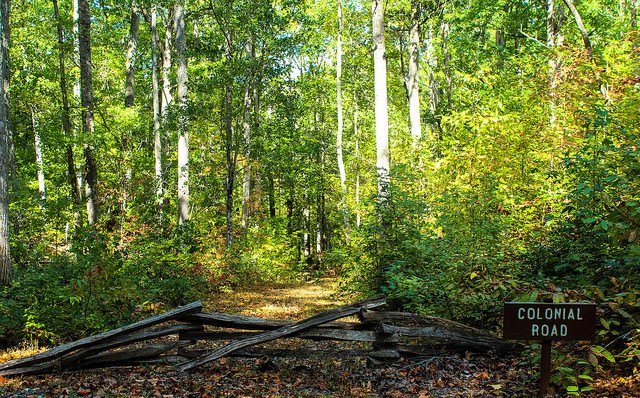 The tombstone of Major Patrick Ferguson 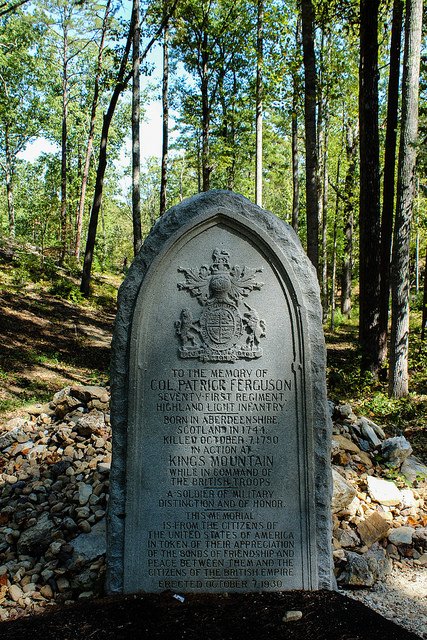 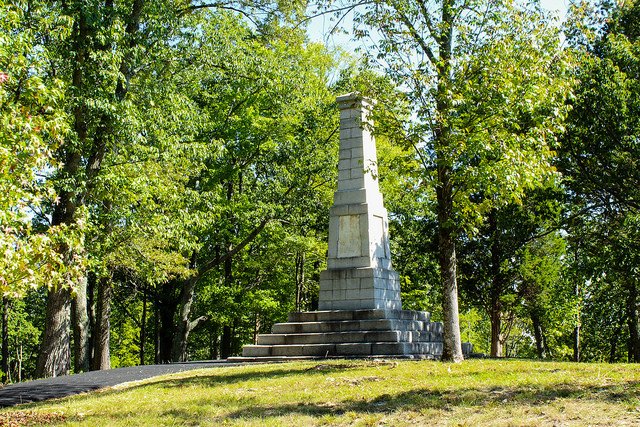 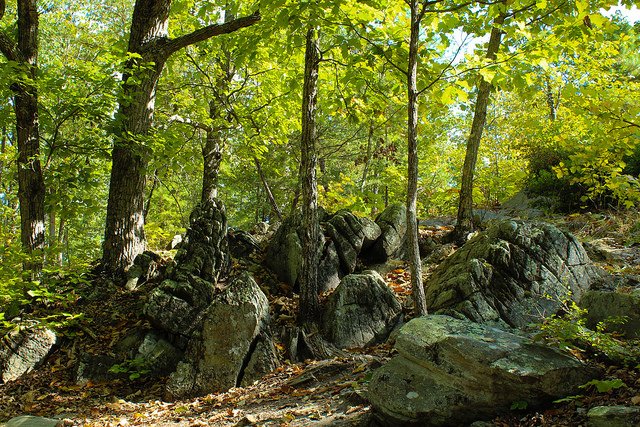 The summer of 1780 looked very bleak for the Southern Patriots. For the previous two years, the British Army forced the Continental Army to fight on two fronts in an effort to wear down the Patriots into submission. The British Army’s Southern Campaign proved itself successful because these colonies had not yet experienced war, they were wholly unprepared to defend themselves against a large-scale invasion. By early 1779, the port city of Savannah, Georgia fell to the British; and May 1780 saw the capture of the South’s other major port city of Charles Town (now Charleston), South Carolina after a month-long siege. Once the British felt in control of the Southern coast, forces led under General Lord Charles Cornwallis began their march inland to Virginia.

Cornwallis’ army swept through the countryside of South Carolina, and carried on its way to North Carolina. This was a famously patriotic colony, so Cornwallis divided his army into three divisions for a quick takeover. Cornwallis continued his march north to reach Charlotte, while Major Patrick Ferguson had control over the western flank with a division of Loyalist New Yorkers and a growing number of local Loyalists. But a resistance movement against the invading British continued. The closer the British Army marched to North Carolina, the more they suffered regular guerrilla-style hit-and-run tactics from militiamen led by the backcountry Colonels Isaac Shelby and Charles McDowell.

In Northern South Carolina, Ferguson grew tired of the backcountry militia and pursued them in retaliation for their attacks upon his division. These guerrilla-style skirmishes consisted of Shelby and McDowell’s men enticing the Loyalists into the woods with whoops and hollers in attempts to trap and confuse them. It was from Gilbert Town, North Carolina (present-day Morganton) that Ferguson issued his famous threat to those pesky “backwater men,” those “barbarians,” the “dregs of mankind.” Releasing a captured Patriot militiaman, Ferguson sent him to deliver his message that read: “If you do not desist your opposition to the British Arms, I shall march this army over the mountains, hang your leaders, and lay waste your country with fire and sword.”

Ferguson’s threat spread through the backcountry like wildfire, and individuals in the mountains took those words very seriously. In early-September Colonel Shelby met with Colonel John Sevier in what is now Tennessee and decided that the backcountry militias were to counter Ferguson’s threat by meeting him in battle. Shelby and Sevier sent out a call to arms to the surrounding areas. Militias were to muster on September 25 at Sycamore Shoals in modern day Elizabethton, Tennessee and rendezvous the following day. From North Carolina came Shelby with 240 militiamen and 160 with McDowell. Sevier brought about 250 from the surrounding Tennessee hills. Colonel William Campbell and his 400 men trekked two days from Wolf Hills (now Abingdon), Virginia to answer the call to arms. A handful of men from Northern Georgia also mustered at Sycamore Shoals to bring the Overmountain Men’s number to around 1,000. The next morning, the backcountry militia departed on foot and on horseback – some men even without shoes – following the Yellow Mountain Road, or Bright’s Trace, on their 330-mile journey off the mountain to Ferguson.

The militia rode hard to Cowpens, South Carolina, even trekking through a terrible snow storm on Roan Mountain, and arrived on October 6. Here, they met additional militiamen from South Carolina and Georgia, which bolstered their number to around 1,800 men. Scouts informed the leaders that Ferguson was nearing the safety of Charlotte, so the men had to act fast. Choosing the best 900 marksmen and the best 900 horses, the leaders created a smaller division and set out at 9pm in the rain to catch the British Army. Colonel William Campbell was elected commander of this new unit. He was a tall, muscular man with a fiery temperament. Legend says that he also carried his Scottish grandfather’s broadsword with him during periods of conflict. With Campbell at the helm, the new militia unit rode 35 miles straight through the cold night, after having traveled 21 miles earlier that day. The sheer determination of these men to engage with Ferguson is apparent in the fact that they traveled all night in the cold October rain without any outerwear, as their cloaks were wrapped around their rifles to keep them dry and operable. On the morning of October 7, the Patriots learned from local residents that Ferguson and his army were stationed atop nearby Kings Mountain, which is little more than a small plateau, measuring about 250 yards long by 60 to 120 yards across and rising no more than 60 feet above the surrounding area.

Colonel Campbell and his unit of 900 men reached Kings Mountain in the early afternoon of October 7. The rainy weather allowed the frontiersmen to advance unnoticed, the wet leaves muffling their steps, and they began to quietly encircle the mountain before being detected. The speed with which Campbell’s men encircled the mountain apparently surprised Ferguson, as evident from how frantically he began issuing orders with this little silver whistle. The Patriot militia launched a four-pronged attack on their Loyalist brethren: Campbell and Sevier taking the right and most difficult side with Shelby and Cleveland on the left. Using their borrowed Native American defensive tactics, these men set up behind rocks and trees from which they could whoop and holler while easily reloading their rifles. The Overmountain Men eventually broke through the Loyalist line and crested the mountain. It was then that Ferguson received a fatal gunshot from an unknown Patriot militiaman. With his foot caught in the saddle stirrup, the British Major’s horse dragged his dead body across the top of the mountain, all the while receiving more gunshots from the Patriot militiamen.

After an hour of battle, the Patriots inflicted heavy losses on Ferguson’s men: somewhere between 150-290 killed, 163 wounded, and 688 taken prisoner. The Overmountain Men only lost 29 men and 58 were wounded. The evening after the battle was spent burying the dead and tending to the wounded. Ferguson’s arrogant declaration proved to the true. He never left the top of Kings Mountain, being wrapped in ox hide and buried in a shallow grave near the spot where he fell. Not wanting to risk an encounter with any of Cornwallis’ reinforcements, the men spent the night on Kings Mountain and began their return to the backcountry on the following morning with prisoners in tow, retreating back over the mountains to their homes as quietly as they came.

General Lord Charles Cornwallis soon heard of the British defeat at Kings Mountain led by some backcountry ruffians. This was a devastating blow to the British general. He lost not only one-third of his army, but his most skilled officer was gone, as well. His entire west flank no longer existed which rendered his North Carolina campaign impractical. Understanding the severity of the situation, Cornwallis pulled back from Charlotte and wintered in South Carolina to revise his plan. The British defeat at Kings Mountain bought time for the Southern Continental Army to devote more energy into devising a plan against Britain’s second attempted invasion. The wintering of Cornwallis in South Carolina allowed for the appointment of Major General Nathanael Greene by George Washington to the command of the Southern Continentals. Under Nathanael Greene, the Southern Army decimated the overwhelmed British at the Battles of Cowpens and Guilford Courthouse in 1781, which directly influenced the British surrender at Yorktown later that year.

Not long after the end of the war, General Sir Henry Clinton recounted the Battle of Kings Mountain as “an event which… unhappily proved the first link of a chain of evils that followed each other in regular succession until they at last ended in the total loss of America.” Thomas Jefferson, our country’s third president, even reminisced on the significance of Kings Mountain 42 years later: “I remember well the deep and grateful impression made on the mind of every one by that memorable victory—it was the joyful annunciation of that turn of the tide of success which terminated the revolutionary war, with the seal of our independence.”

Established on March 3, 1931, Kings Mountain National Military Park was created to preserve the site of the Battle of Kings Mountain. Inside the park, a 1.5-mile trail leads from the visitor’s center, around the mountain, and up to the plateau to where the Loyalists were situated. Major Patrick Ferguson’s grave is also marked on top of the plateau. The visitor’s center provides an exhibit and film regarding the battle, as well as other information regarding the culture of the historic “backcountry” and local ecology. Throughout the year the site hosts many living history events showcasing life during the colonial era.