Lewis Wetzel was a frontiersman who was deemed trustworthy by the early settlers of Wheeling, WV. Wetzel spent most of his time hunting and killing Native Americans, and considered the killings as a sport. The cave is made out of sandstone, and had multiple rooms inside that Wetzel utilized. The tales of Lewis Wetzel and the happenings at his cave have become folklore in Appalachian history. Today, most of the cave system has collapsed, and all that remains is the outer structure.

Picture of Where Lewis Wetzel's Cave is Located. The Rail Road Tracts are Now Bike Trails 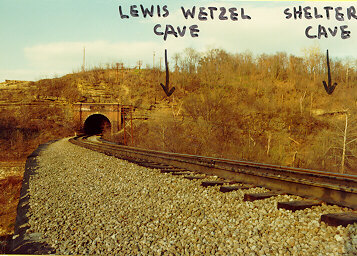 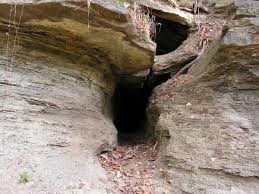 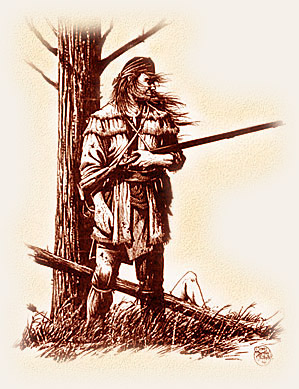 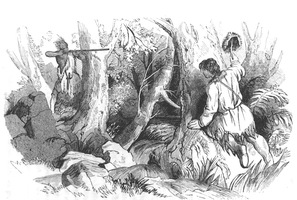 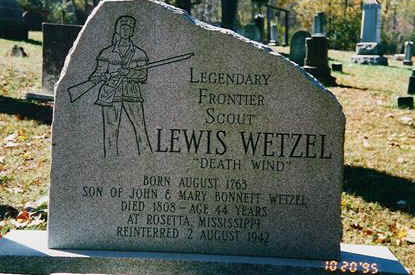 Lewis Wetzel was the fourth of seven children belonging to Mary Bonnet and John Wetzel, and was born in 1763 in Lancaster, Pennsylvania. In 1764, the Wetzel family, along with the Bonnets, the Zanes, the Eberlys, and the Rosencranzes, moved across the Alleghenies. This group settled near present day Wheeling, about fourteen miles away from the Ohio River. The Wheeling Creek settlement was on the edge of King George's Proclamation Line of 1763, as it had been redrawn at the conference held at Fort Stanwix in 1768. That was where the Iroquois sought revenge on old enemies from the west by granting all Shawnee, Miami and Delaware lands east and south of the Ohio as far downstream as the mouth of the Kanawha  to the British. The Ohio Indians had neither participated in nor agreed to the disposition of their land, and the Wheeling Creek settlers were frequent targets of Ohio Indian attacks from 1770 until 1795, when the Treaty of Greenville moved the boundary farther north.

Wyandots captured Wetzel and his brother from their home when Wetzel was 13, but they managed to escape and return back to Wheeling after two days of being held captive. The boys were taken while tending the family farmstead, and Wetzel recieved gunshot wounds during the attack and resistance. After this incident, he perfected shooting a long rifle and fighting with a tomahawk and a knife. He was rumored to have been able to shoot anything that was big enough to see, and could skillfully load, prime, and shoot a long rifle while running full speed through the woods. Wetzel, his father, and brothers were among the defenders of Fort Henry when it was attacked by British and Indian forces in September 1782.

Wetzel was known as an Indian hunter. He never took up land, built a cabin, farmed, or did 'normal work'. He roamed across Ohio country hunting Indians and carrying out one man raids. He proclaimed a one man war on the Indians after his father and brothers were killed by Indians during a hunting trip. As the years passed, people began to question his sanity. He wore tassels in his split earlobes and took great care of his almost, knee length hair. Wetzel's Cave is where he would lure Indians so he could kill them. The following is the legend of Lewis Wetzel's Cave:

In 1788, Lewis Wetzel made one of his occasional visits to Wheeling where he visited his sisters in Fort Henry. He soon learned of a turkey-call which had been plaguing everyone so much because it had been heard many times and many places, thus giving the call a supernatural quality. Men had tried to find the source of the plaintive sound frequently never returned. After hearing many different stories, Wetzel left the Fort in search of the mysterious bird.
Night fell as he searched the hills, so needing a good vantage point, he climbed to the fork of a tree. The mournful cries soon came at intervals and at times seemed to be very close and then far off in the distance.
In the light of the moon he saw something pass silently through the brush up toward the top of the hill.
At dawn he descended from the tree and found some faint marks in the brush which led him sixty feet above the creek on the east side of Creek Hill where the trail ended suddenly. "Here he found the mouth of a capacious cavern, running he knew not how far underground, the entrance almost completely obscured by a heavy growth of vines and foliage,"
He hid in the brush and late in the afternoon a piercing turkey-call broke the silnence. "The cries came from the cavern!" Wetzel saw an Indian slowly rise in the mouth of the cave and, "Then, twisting his mouth into a long horn-like shape, the red-skin sent forth the shrill, prolonged, and peculiarly distressing, moaning cry,... Wetzel raised his rifle and aimed carefully at the warrior's head. He pulled the trigger and ended the turkey-cry forever.1

Wetzel's most well know murder is that of Seneca chief Tegunteh, who was peacefully involved in the negotiation of the Treaty of Fort Harmar. Wetzel was arrested twice for this crime, but was never punished. He claims to have taken 27 scalps, but there is reason to believe that the count could have been higher. After the Treaty of Greenville, Wetzel moved to the Louisiana Territory, where he was arrested and convicted for counterfeit. Wetzel died in 1808 in the Mississippi Territory, but was buried near Wheeling. Wetzel County, West Virginia is named after this infamous killer.