Abraham Lincoln and Stephen A. Douglas engaged one another in seven public debates during the election of 1858. These debates would soon become famous for their substantive nature, as well as the eloquence and importance (and in the case of Lincoln, the future importance) of the participants. The first of seven debates between Lincoln and Douglas took place at this park on August 21, 1858 before a crowd of ten thousand. The candidates discussed many issues, the most important of which would be the question of slavery's extension into the American West. Although few could predict it in 1858, this question led to the dissolution of the Union between 1860 and 1861 and four years of civil war. Lincoln lost the election of 1858 but would defeat Douglas in the Presidential election of 1860. 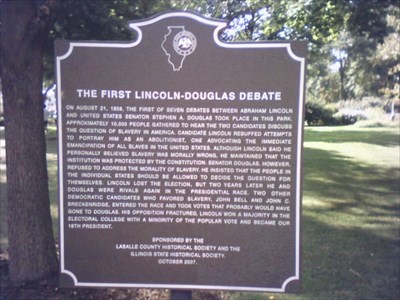 The first debate started with Douglas launching a fierce verbal attack against Lincoln alluding to an idea that Lincoln's new Republican Party was out to abolish slavery. That first question not only served as the microcosm of the seven famous Lincoln-Douglas debates, but the debate that gripped the nation from the end of the U.S. Mexican War (and subsequent large land expansion of the West), through the Civil War. The question of slavery's expansion, or existence, no longer could be kept at bay throughout the United States' existence.

By 1858, the debate over the slave expansion in the newly formed western states of the U.S., gained by the victory in the U.S.-Mexican war, had made the slave question paramount in the country, and also helped dismantle the strong two-party system in the U.S., which had been the Democrats and Whigs, prior to the Civil War era. Nothing epitomized the tenuous nature of the issue more than the Kansas-Nebraska Act of 1854, of which Stephan Douglas was significant in creating. The resultant turmoil -- notably "Bleeding Kansas," demonstrated just how high passions ran with regards to the slave issue, notably its role in Westward expansion. The topics attached to this idea are deep, and complex, and go beyond the scope of this piece, but it should be known that the debate was more than just a historic argument between two politicians, and it went beyond just abolition - it involved economics, morality, political power, and numerous other variables that made it tough to resolve. That is why the debates were heated, numerous, and riveting.

Douglas played on the racial aspect of slavery in the first debate, and he did so immediately. He asked the Illinois crowd if they desired "free Negros to flow in?" The crowd responded with "Never," He asked the crowd if they wanted their prairies covered with black settlements, to which they again responded, "Never!" And then he played on the idea of free blacks coming into the state and voting. Again, they responded with, "Never."  Douglas followed with a comment that a vote for Lincoln - the "Black Republican Party," is a vote for the things the crowd "never wanted."  Douglas accused Lincoln of believing a negro to be his equal, and a brother - to which the crowd laughed. And then he assured the crowd that he, Douglas, disagreed. He concluded that he believed the Constitution was made on a white basis. 2

Lincoln had a hard time retorting many of the claims. However, as he did throughout the debates, he did make it clear that he did not consider Negros to be his equal. In fact, in later debates he said, "I, as much as any other man, am in  favor of having the superior position assigned to the white race." However, while noting that (and it is important to understand that Lincoln was speaking in 1858), he also made it clear that Negros deserved to enjoy freedom from slavery, and all the rights enumerated in the Declaration of Independence -- the right to life, liberty and the pursuit of happiness."  Just as Douglas' comments were met with cheers, so was Lincoln. Some note it was met with great applause. 3

The debates, which started in this location of Ottawa, IL, are indicative of American cultural values in 1858, the political upheaval of that time, the racial understandings of that era, and a multitude of other variables. A study of these debates can provide immense insight into the overall culture, not from a present point of view, but from those living in the only culture, and the only era, they understood.