Near the intersection of Routes 28 and 29 is the former site of the Newgate Tavern in Centreville, Virginia. The tavern was erected in Newgate (modern Centreville) circa 1785 and became a popular hub for social and economic activity. A well-known stop along the road in and out of Northwest Territory, the Newgate Tavern was visited by George Washington on at least four occasions. Though it was thought the tavern was lost to time and urban development, an archaeological excavation uncovered the remains of the tavern and, in 2013, a marker was placed on the site so that it would not be lost again. 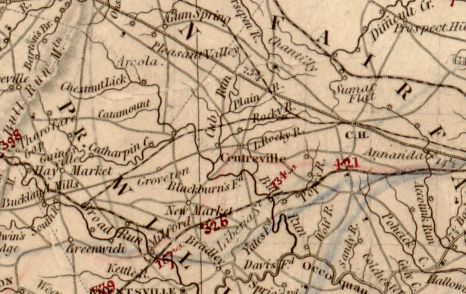 In the colonial period, the area that is now Centreville, Virginia was known as Newgate. As a central point along numerous travel routes, Centreville (formerly spelled Centerville), the economic activity in the community was highly dependent upon travelers. General stores and taverns were established to accommodate them. Newgate Tavern, established in 1768 by William Carr Lane (whose family also sold convicted servants), shared its name with a London prison. The Newgate area served as a "new gate" to the Western territories, and the tavern became a well-known stop along Mountain Road.

The tavern was a popular gathering spot at which visitors could socialize and conduct business transactions. The tavern provided lodging, food, beverages, as well as entertainment. George Washington visited the Newgate on at least four occasions during his travels and dined at the tavern. During local events, such as religious revivals and horse races sponsored by the Centreville Jockey Club, newspaper advertisements invited customers to partake of the available accommodations. The tavern also held balls "with the best music that can be had."1

As a hotspot for economic activity, both land and slave auctions occurred at the Newgate. One such auction in 1848 entailed the sale of "several valuable slaves of both sexes"2 outside the front door of the tavern. The county court regulated the rates charged by taverns, including the Newgate Tavern. For example, in 1816 a night's lodging on clean sheets was 25 cents, a warm dinner with cider cost 75 cents, and 75 cents would buy one quart of peach brandy.

By the early 1800s, the tavern had been renamed the Eagle Tavern and included a hallway, four large rooms on the first floor, and large chambers above. The building was warmed by two brick fireplaces. Below, a stone cellar extended across the entire length of the structure. The business competed for a time with the Sign of the Black Horse, another tavern. Eventually, Newgate Tavern fell into disrepair; it was demolished in the 1930s. Some of the wainscoting from the Newgate was used in repairs at Mt. Gilead (the renamed Sign of the Black Horse), the oldest standing structure in Centreville.

The location of the Newgate was believed to be lost to time, and it was assumed that the original site had been covered up by modern urban development. However, archaeologists hired by Walgreens, who had built a store near Centreville's historic park, discovered the tavern's foundation. They also found one of the angled fireplaces, the privy foundation, and numerous trash pits. Excavations into the pits revealed evidence of smoking pipes, wine bottles, tableware ceramics, and the bones of the animals served to guests. Following the excavation, the site was reburied and a historical marker was placed nearby.