The Wheeling B&O Railroad Passenger Station in its heyday. 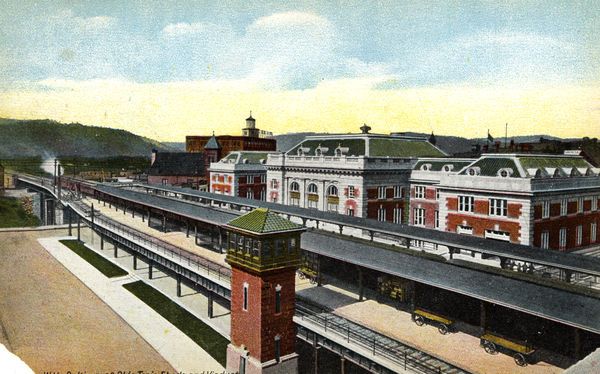 An early stereoview of the terminal that occupied the grounds prior to its rebuilding in 1906-1908. This photograph was taken between 1867-1869. Image courtesy of Ohio County Public Library, Wheeling, WV. 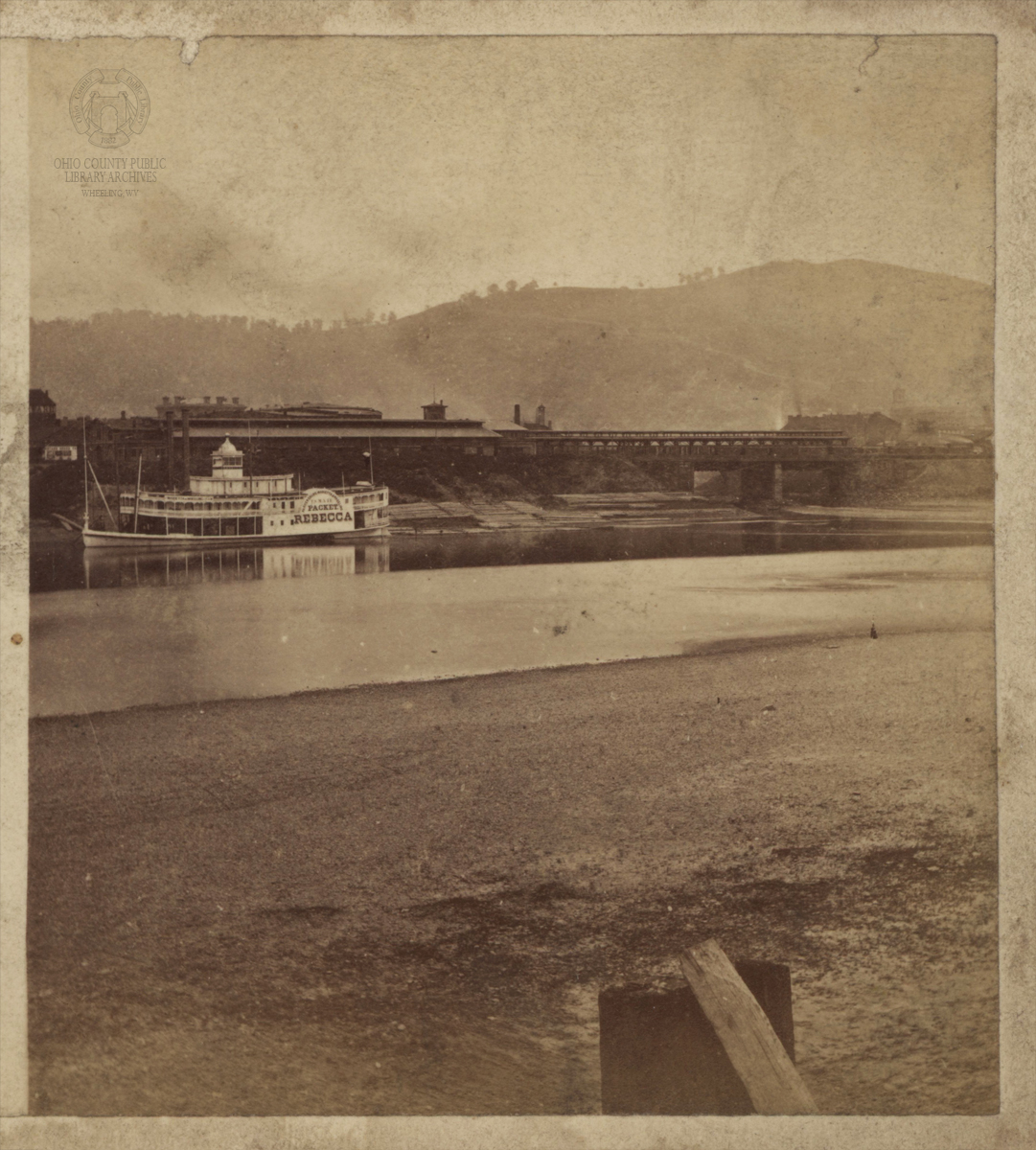 Map of the B&O lines and depots throughout Wheeling, W.V. From Fall 2000 issue of Classic Trains magazine (see sources). 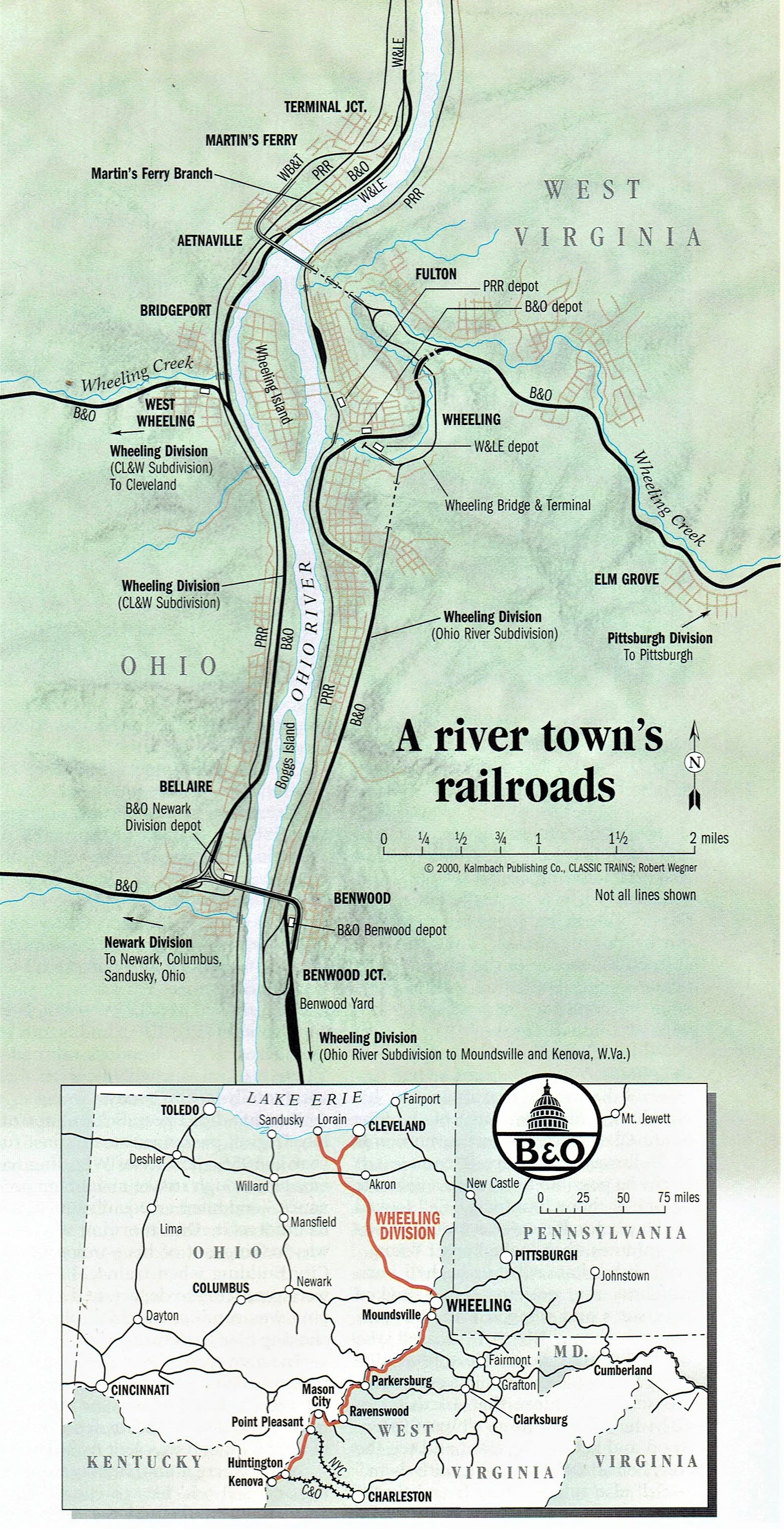 The Wheeling Baltimore & Ohio Railroad Passenger Station was designed by M. A. Long, who worked for the B&O Office of Engineering. The station originally had a two-story waiting area in the central location of the building. Although the station was completely remodeled in 1976, the outside architecture and style remain the same. Wheeling became a bustling industry town, with its population of 13,986 in 1860, to 30,737 in 1880; this rise in population and industry called for better facilities to accommodate the growing amount of people. In 1906, over 100 passenger trains left and entered Wheeling every day, and it was decided that a new passenger station would be built with an accommodating viaduct.

The Wheeling Baltimore & Ohio Railroad Passenger Station opened in September of 1908.
The electricity for the station was generated using steam where the current library for WVNCC is located today. The inside of the building was described as very elegant with the two-story lobby having a colored glass dome ceiling, marble floors and wainscot, brass and wrought iron chandeliers and sconces, scarlet colored walls, oak trim, and cast iron stair wells. The train tracks were elevated because the area was prone to flooding. Therefore passengers would purchase their tickets in the first-floor lobby and board the train on the second.

The railroad industry hit its peak in Wheeling during the 1920s, and gradually declined in the 1930s and 1940s. In 1962, passenger trains stopped running to and from Wheeling, WV. However, freight trains still use the viaduct today. The building was sold to a private owner who had a bar in the 4th floor, the Blue Caboose until the state bought the building in 1975. In 1976, the building was reopened as West Virginia Northern Community College. The exterior of the station was restored, and the inside of the building now contains offices, an auditorium, classrooms, and a student activities center.

The Alumni Association for WVNCC has preserved the Wheeling B&O Passenger Station by maintaining a large collection of B&O memorabilia in their museum. The Alumni's museum belongs to the West Virginia Association of Museums and contains 1,000 pieces of Hazel Atlas Glass and a small collection of Viking Glass manufactured in the New Martinsville area.