The Linn Cove Viaduct is both a modern engineering feat and a tribute to environmentally sensitive construction. Located in the 90 mile stretch between Boone, NC and Asheville, NC on the Blue Ridge Parkway at milepost 304.6, the Linn Cove Viaduct, sometimes called the “missing link”, provides not only one of the most iconic views of the Parkway, but a rich history as well. Construction began on this final piece of the Parkway in 1979 after years of negotiation between the National Park Service, the Federal Highway Administration, the North Carolina State Government, and the owners of Grandfather Mountain itself. The bridge itself is made from 153, 50-ton concrete segments, totaling 1,243 feet in length. In order to maintain the integrity of the surrounding environment, the bridge was built from the top down, creating minimal disturbance to ecosystems below. Completed on September 11th, 1983, the Viaduct was completed and opened to the public, though not opened to drivers until 1987, connecting the two halves of the Blue Ridge Parkway, which stretches from Waynesboro, VA to Asheville, NC continuously. The Linn Cove Viaduct is a beautiful reminder of the historical cooperation between the government and its citizens, as well as the beginning of environmentally conscious development and natural resource conservation as we know it today. The Viaduct is a must see for travelers, historians, and nature-buffs alike.

The Linn Cove Viaduct in fall 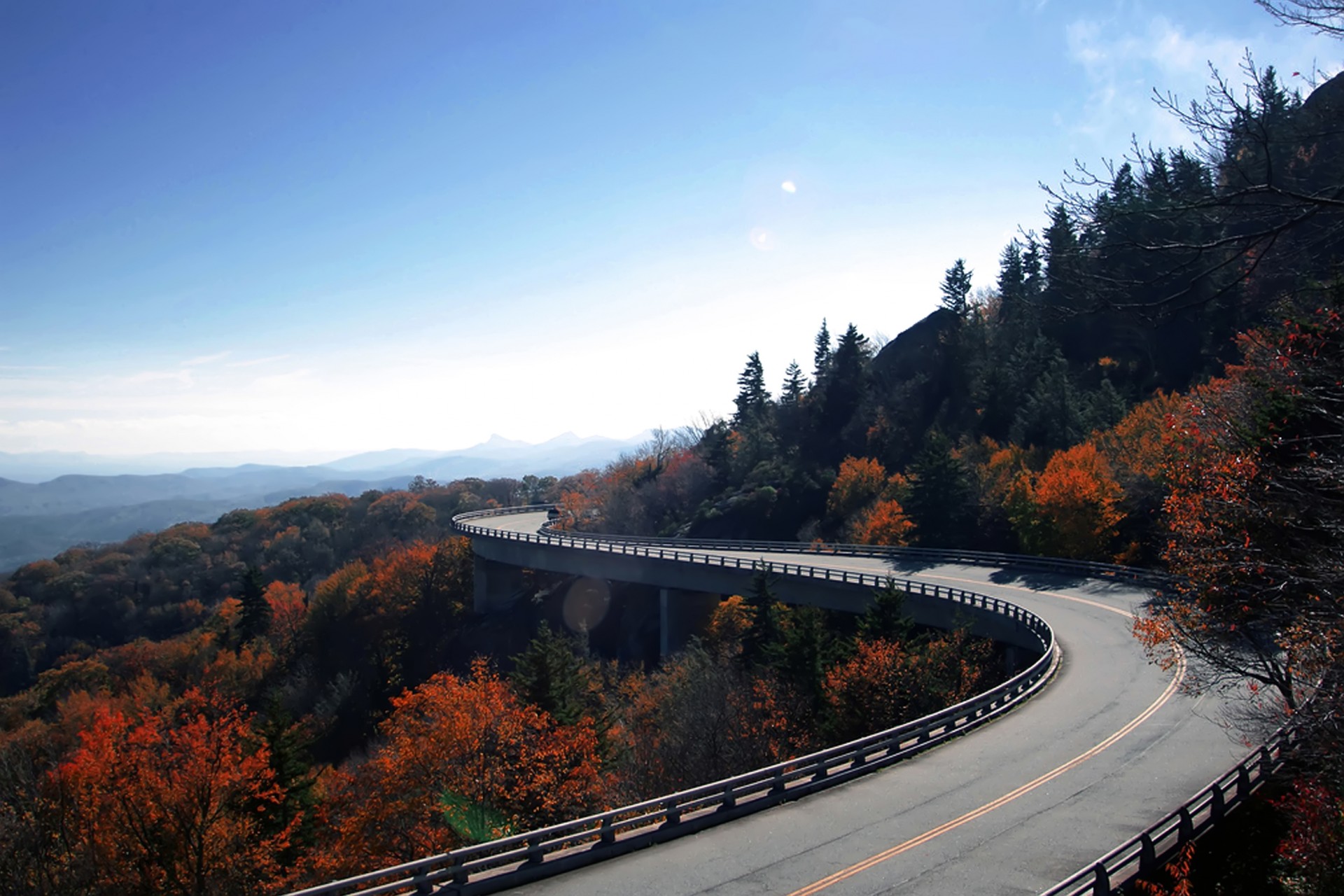 The Linn Cove Viaduct was originally not supposed to exist at all. The first plan for completion included a “high route” to connect the two pieces of the Parkway, which would cut higher on the mountain and on ground level. Hugh Morton, the owner of Grandfather Mountain was, of course, against this plan because of damage it would cause to the ecosystem of the land it would cover. This land is now an International Biosphere Reserve. After years of mediated debate and planning, an agreement was reached between the National Park Service and Morton, establishing a plan for a “middle route” through Linn Cove.

The Viaduct was built using a stiff arm crane to lower the individual sections of bridge onto the supports or against the preceding portion and then epoxied into place. The pieces were built at an indoor facility using the match casting method, in which each piece is cast against the one that precedes it. Using newly available computer technology of the time, the builders were able to keep the margin of error to within 0.0001 feet. For extra support, steel cables are threaded throughout the Viaduct in order to secure the pieces.

The approach taken to reduce the environmental impact of the Viaduct was way ahead of its time. The top-down building approach meant that there was no need for what’s called a pioneer road, which allows equipment and workers to pass through before the road is built, meaning less damage to the environment below. The only trees allowed to be cut during the project were those directly in the path of the bridge. Each tree was flagged and pre-approved before construction began, and each subsequent tree required explicit approval before construction continued.

Amazingly, the only construction that actually occurred at ground level was the drilling of the foundations for the only seven permanent piers on which the Viaduct rests. As an added measure of protection, all exposed rock was covered to prevent staining from the concrete, epoxy, and grout. To make the Viaduct appear as seamless as possible, all the concrete used was tinted with iron oxide in order to match the surrounding rocks.

In addition to the Viaduct itself, there is also a trail, called the Tanawha Trail, which circles 13.5 miles from Beacon Heights to Julian Price Park. The trail passes through the International Biosphere Reserve, where the originally proposed “high route” would have been located. The trail can be accessed from both above and below the Viaduct, offering some of the most spectacular views on the Parkway.