On December 17, 1860 following the election of President Abraham Lincoln, South Carolina held an official convention in this church and voted unanimously secede from the United States. The state house at the time was not large enough to hold all of the delegates so First Baptist Church was chosen because it could accommodate all of the delegates. The church was added to the National Register of Historic Places in 1971 and declared a National Landmark in 1973. A new church addition was built in 1992 and since then worship services have been held there. The original church was renamed as the James Petigru Boyce Chapel at that time and is currently used for weddings and offices.

The original First Baptist Church, now the Boyce Chapel, was where state delegates met on December 17, 1860 to vote to secede from the United States. Church services are now held in the building with the spire in the background. 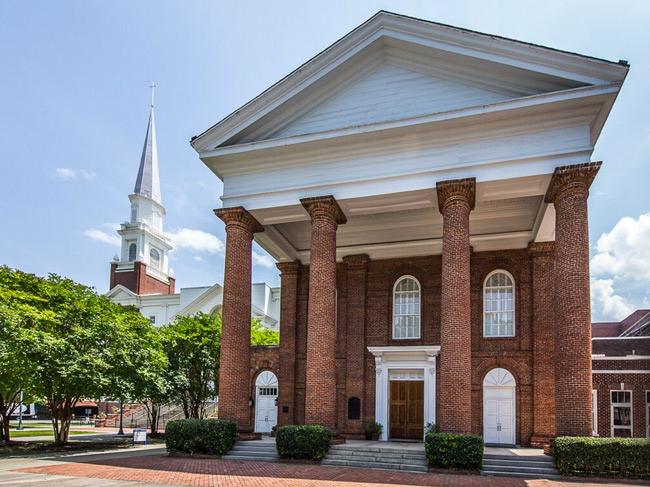 The church as it appeared on an old postcard. 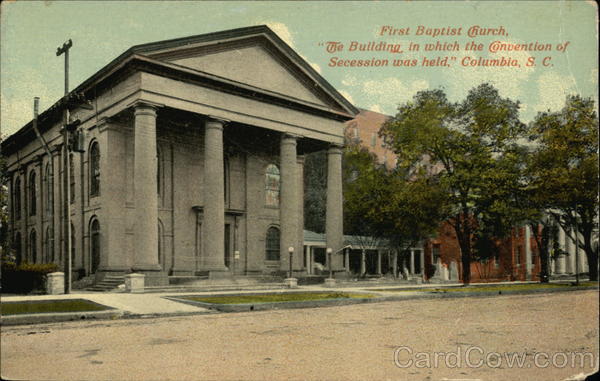 The congregation was organized in 1809 and built a wood-frame church in 1811 at a different location. There were 13 original members, nine were white and four were African American. The original building, what is now Boyce Chapel, was built in 1859 and designed in the Greek Revival style. It features a red-brick exterior, a large portico with Tuscans columns supporting a large pediment, and arched windows. A number of changes were made to the building in 1941.

In the decades leading up to the Civil War, tensions between southern slave states and northern free states were increasing. The country was still expanding in the 1800s and disputes centered around whether slavery would expand to new states and territories. After the Mexican-American War (1846-1848), which resulted in the U.S. acquiring much of what is now the western part of the county, this debate came to a head. The Compromise of 1850 diffused the situation but in the end it was only temporary. The Kansas-Nebraska Act of 1854 further inflamed these tensions.

The election of President Abraham Lincoln convinced many southerners that secession was the only option to maintain the institution of slavery. South Carolina was the first to state to make this sentiment official. The legislature called for a convention to be held at First Church to debate and vote to secede. The vote was unanimous: 159-0. The convention met for only one day as the city was experiencing an outbreak of smallpox. It reconvened on December 20 in Charleston and the Ordinance of Secession was adopted and signed, making the decision to secede official. It served as a catalyst for the Gulf states states to follow suit (Arkansas, North Carolina, Virginia, and Tennessee did not secede until after the Confederate attack on Fort Sumter on April 12, 1861). During the war, Union troops did not burn First Church down. Apparently the church's sexton told them that the site of secession was held at another church, which the troops did destroy.

Sunday school and the worship service are held on Sunday mornings. The Webb Library is also open on Sunday and Wednesday evening from 5-6pm.