Now a national monument, Fort Matanzas is a historic fort built in 1742 by the Spanish to protect St. Augustine from the south from the British. It is a physical reminder of the Spanish phase of the Colonial American history in Florida. The name Matanzas comes from the root word mata, meaning to kill. Therefore, Matanzas refers to "the place of many slaughters." It is open to the public and visitors may take a ferry to it. It is sometimes possible to see dolphins in the Matanzas River. There are nature trails, beaches, and picnic areas available as well for those who do not wish to visit the fort itself. The fort was added to the National Register of Historic Places in 1924. 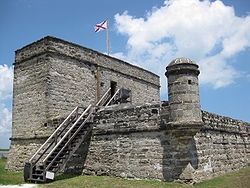 The Spanish and French had continual battles over who had control of the Florida coast. One of the first incidents occurred in 1564 between Spanish General Pedro Menendez de Aviles and the French who had established an illegal—from the Spanish viewpoint—colony on Spanish territory and also built a base called Fort Caroline. The French civilians who came were Protestants called Huguenots. Aviles captured Fort Caroline and subsequently ordered the French to convert to Catholicism. They refused. As a result, Menendez ordered them to be executed; some survived but over 100 were killed (another mass execution occurred a couple of weeks later when 134 were killed). The fort and inlet received its name as a result of these incidents.