The Lester Armour House is a historic mansion in Lake Bluff, Illinois, United States, designed by architect David Adler in 1931. Lester Armour (1895 - 1970) was the grandson of meatpacking tycoon, Philip Danforth Armour, He married Leola Stanton in 1918; they had five children. In the early 1920s, he left the family business to go into banking. He later divorced and then married Alexandra Galitzine, a Russian princess who was previously married to Russian Prince Rostislav Alexandrovich. After she died in 1977, the house was sold to movie production company and used in movies, and then it was purchased by acclaimed singer Richard Marx in 1997 who lived there until 2014. 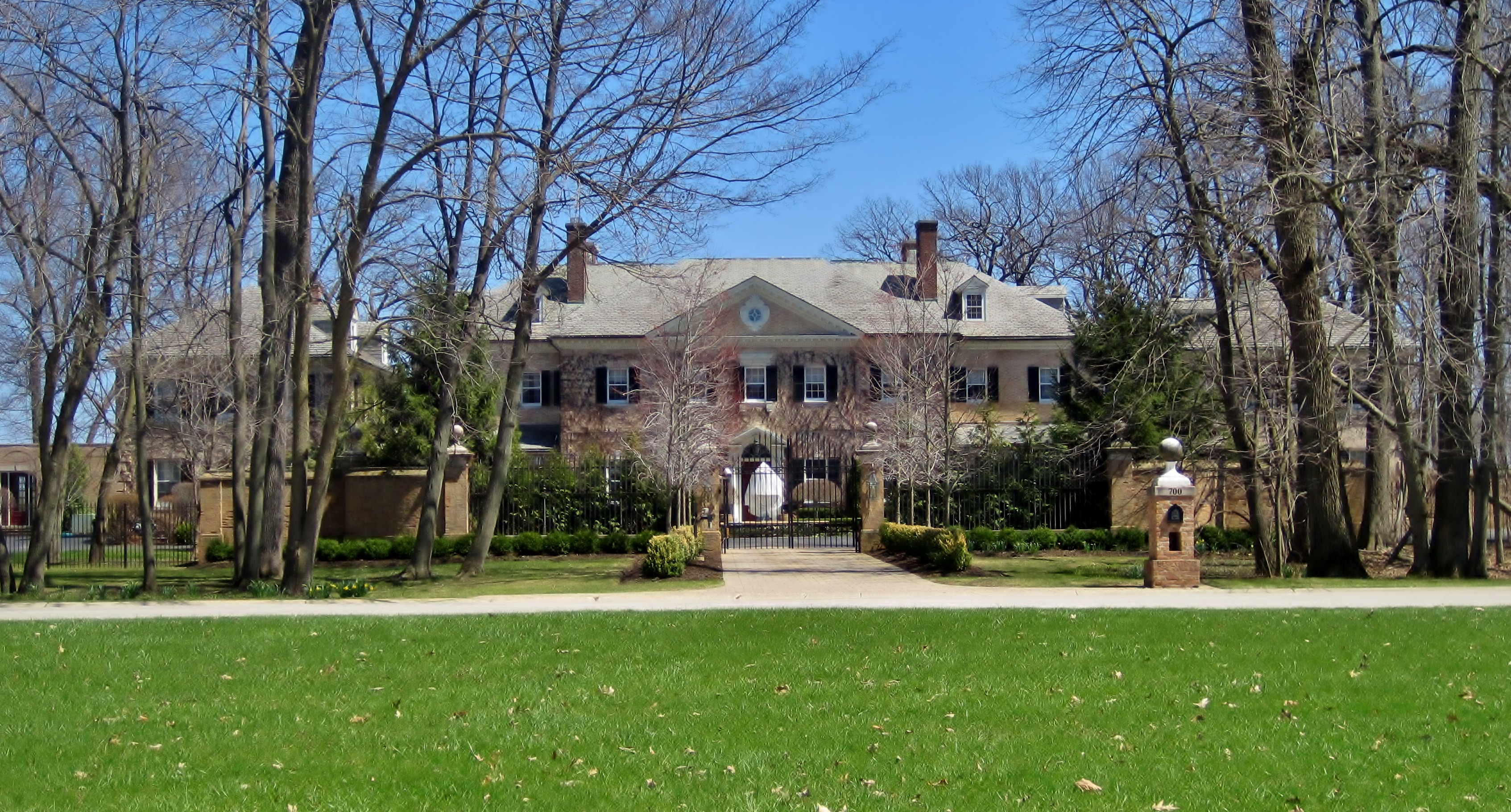 Of Chicago's many nicknames, "Hog Butcher to the World" is one of the names that is most representative of Chicago's identity. Coming out of the Civil War, Chicago grew as a city due to its meatpacking and as a train hub, and those tow industries were intrinsically linked. One of the kings of that industry was Philip Armour, who like many Gilded Age tycoons, amassed a fortune. His grandson benefitted from that fortune, and went on to his own thriving career -- this was his mansion. The building represents the the family's wealth, the city's history, the Gilded Age, and even the changing nature of American diets.1 As well, the house enjoys its own history, one that began with Armour's grandson, and then one involving movies and becoming the home of a famed musician -- representative of a modern America where wealth often lay in entertainment and service industries.

The Encyclopedia of Chicago notes the genesis of Chicago attached to meatpacking:

[In] 1840 Cincinnati led all other cities in pork processing and proclaimed itself Porkopolis. However, Chicago [claimed] that title during the Civil War.

It was able to do so because most Midwestern farmers also raised livestock, and railroads tied Chicago to its Midwestern hinterland and to the large urban markets on the East Coast. In addition, Union army contracts for processed pork and live cattle supported packinghouses on the branches of the Chicago River and the railroad stockyards which shipped cattle. To alleviate the problem of driving cattle and hogs through city streets, the leading packers and railroads incorporated the Union Stock Yard and Transit Company in 1865 and built an innovative facility south of the city limits. Accessible to all railroads serving Chicago, the huge stockyard received 3 million cattle and hogs in 1870 and 12 million just 20 years later.

Between the opening of the Union Stock Yard in 1865 and the end of the century, Chicago meatpackers transformed the industry. Pork packers such as Philip Armour built large plants west of the stockyards, developed ice-cooled rooms so they could pack year round, and introduced steam hoists to elevate carcasses and an overhead assembly line to move them.2

Chicago also benefitted from being far removed from the fighting during the Civil War, whereas St. Louis and Cincinnati struggled in that regard.3 Thus, people like Phillip Armour benefitted from those variables, as well as all the factors associated with the Gilded Age, and made his fortune.4 The Encyclopedia of Chicago goes on to explain,

The success of Chicago's Union Stock Yard (1865) convinced him that the future of meatpacking lay in that city. He and his brothers formed Armour & Co. in 1867 and started packing hogs in a rented plant on the South Branch of the Chicago River.

Armour purchased land west of the stockyards in 1872 and built a large pork plant. He and his family moved to Chicago three years later. By reinvesting profits over the next quarter century, Armour & Co. expanded its pork operation and added dressed beef, meat canning, and the manufacture of oleomargarine, glue, fertilizer, and other byproducts. It also acquired packing plants in Kansas City and Omaha, branch sales offices across the country, and refrigerated railroad cars to deliver chilled, fresh beef. Like other Chicago packers, Armour resisted trade unions and helped defeat strikes in 1886 and 1894.5

Although Lester Armour only briefly worked for the company prior to going into banking, he benefitted from his Grandfather's (and Grand Uncles') fortunes, thus able to build his own mansion. He hired Architect David Adler to design the house in 1931 with little input from Armour towards the design. The style of the house exhibits influence from the Colonial and Federal styles, consistent with early Virginia architecture of the 18th century. However, despite its colonial inspiration, the design included several modern touches, such as the automatic electrical illumination of closets; the lights turned on when one opened the doors.6

As previously mentioned, Lester Armour lived in the house from the 1930s to 1970, when he died. His second wife lived in the house until her death in 1977. The house was then sold to a Hollywood production company, who used the house for films. In 1997, pop/rock singer Richard Marx purchased the building and lived there until 2014, when he sold it for nearly $18 million.7 Thus, a building once symbolizing the fortunes gained during the Industrial Revolution, became the property of those in the entertainment industry - the modern example of where wealth often lies.

Hence, the house represents the changing nature of the country, from that of manufacturing to one marked by service industries and leisure. It also stands as a monument to Chicago's development as a meat-packing city, and the influence of Armour in that development.