The historical marker here commemorates the signing of a document known as the “Pittsburgh Agreement” that described the government of a potential Czechoslovakian state should the Czechs and Slovaks achieve independence from the Austro-Hungarian Empire. Signed on May 31, 1918, the Pittsburgh Agreement was the result of decades of resistance to Austro-Hungarian rule in what became Czechoslovakia that culminated after the empire’s defeat in the First World War. The most notable signatory to the document, Czech politician Tomáš Garrigue Masaryk, became president of an independent Czechoslovakia shortly thereafter and receives much of the credit for the Pittsburgh Agreement, but it would not have been possible without the cooperation of Slovak activists in the United States like Jozef Hušek as well. Regardless the Pittsburgh Agreement was a foundational document guaranteeing the rights of the Slovak minority in the union with their Czech neighbors and, when those guarantees were not upheld, later became a justification for a division of Czechoslovakia. The historical marker commemorating this event is open to the public twenty-four hours a day. 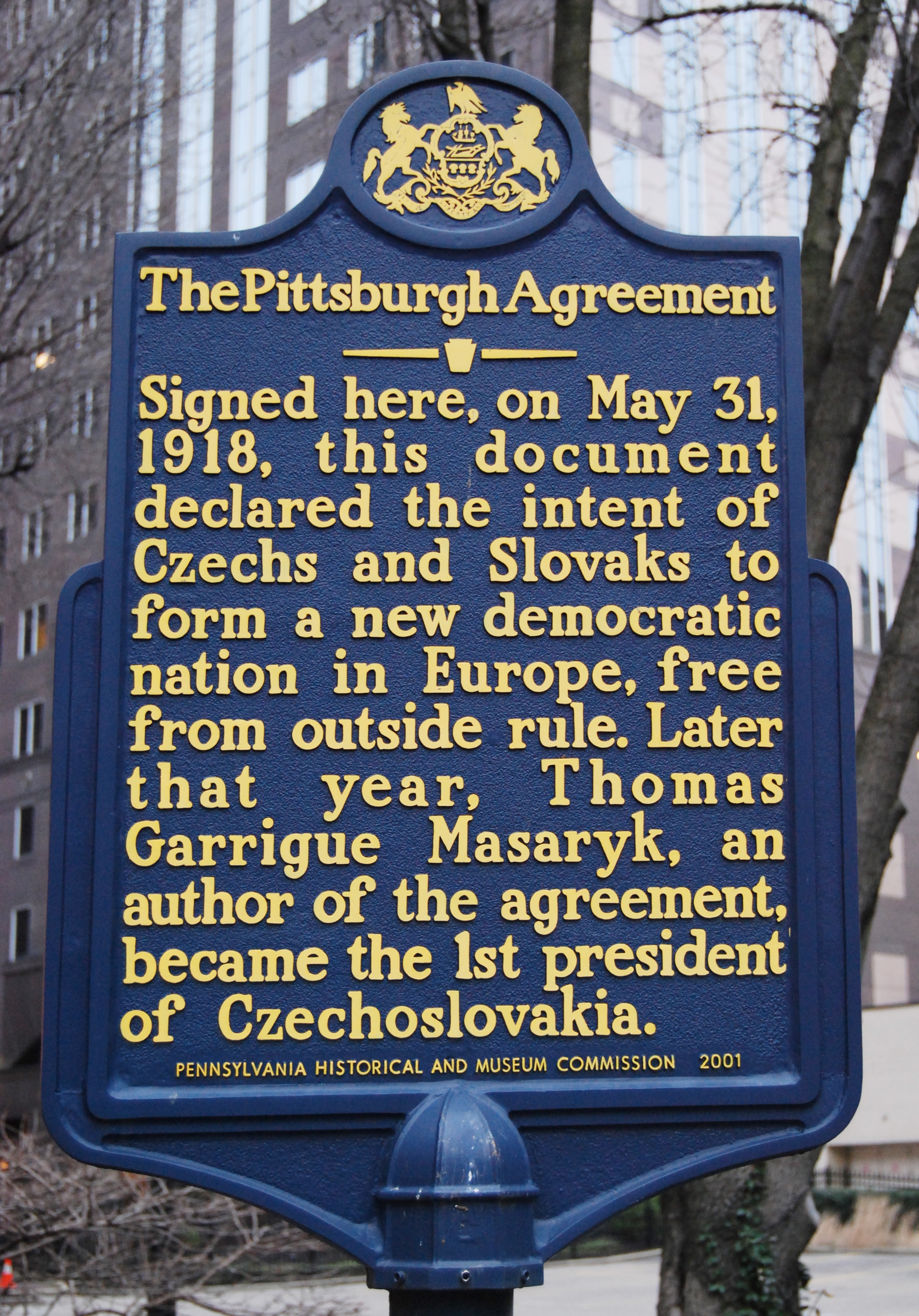 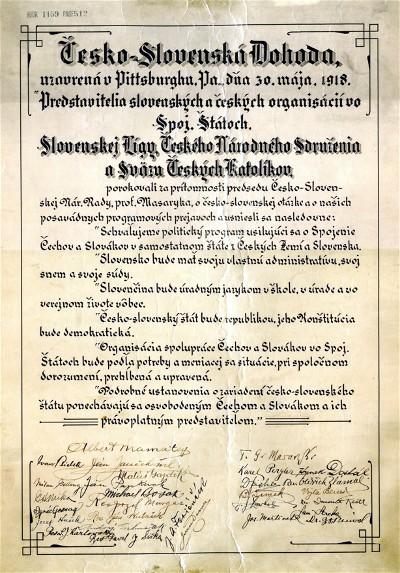 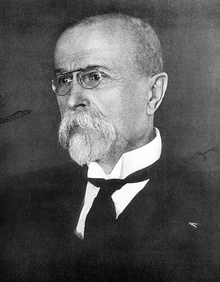 Although Czech and Slovak immigration to what became the United States began in the earliest years of the European colonization of North America, it would not hit its stride until roughly half a century prior to the outbreak of the First World War. The first wave of Czech immigrants to the United States during this period arrived in the immediate aftermath of the failed Revolutions of 1848, but subsequent and larger waves reached American shores with the lure of cheap land and industrial employment. Slovak immigrants, meanwhile, sought to escape the overpopulation and unemployment at home starting in the 1870s. Concurrently, both ethnic groups (like many in Europe over the course of the nineteenth century) began to embrace a growing sense of national identity at odds with the political aims of their overlords within the Austro-Hungarian Empire. Slovaks in Hungary faced an aggressive policy of “Magyarization,” by which government authorities sought to erase their culture and force their adoption of a Hungarian identity that might secure their loyalty to the Empire. Czechs in Bohemia similarly faced Germanization, albeit to a less systematic extent. In response, immigrants from both areas clung more fiercely than ever to their ethnic identities as time went on and, as a result, arrived in the United States as firm nationalists with a drive to oppose Austro-Hungarian rule from afar.

This drive coalesced in the early twentieth century with the creation of two separate organizations devoted to the creation of independent nations for Czechs and Slovaks living in the Austro-Hungarian Empire. The first stemmed from a meeting of Slovakian community organizations and newspapers in Pittsburgh on April 4, 1907, which called for a National Slovak Congress and prompted a similar gathering in Cleveland on May 26 that resulted in the foundation of the Slovak League. Secularist Czechs in Chicago formed the second, the Bohemian National Alliance, on September 2, 1914. Although working towards similar ends, the question of how closely they might align themselves with one another remained up for debate. Some in both camps perceived their shared Slavic roots as cause for joining forces in the fight against Austro-Hungarian rule, a fight neither might be capable of winning without the other. Others expressed concern that such a union might threaten the cultural and ethnic independence for which they fought. This was particularly true of many Slovaks, who faced the possibility of minority status in a combined nation with fears born from generations of living under the threat of Magyarization. Any alliance between the two groups would thus hinge upon an agreement by the Czechs to respect Slovak autonomy in any future Czechoslovakian nation.

Support for an alliance between the Bohemian National Alliance and Slovak League reached their zenith with the outbreak of World War I. The assassination of Austro-Hungarian Archduke Franz Ferdinand by Serbian nationalist Gavirlo Princip not only struck a blow for ethnic nationalism in the Empire, it pulled European Czechs and Slovaks into a military conflict neither group had chosen. With those events in mind, representatives from the Bohemian National Alliance and Slovak League met on October 22-23, 1915 at Bohemian National Hall in Cleveland, Ohio to sign a document that has since come to be known as the Cleveland Agreement. In it the supporters of Czech and Slovakian independence swore to join forces in the struggle for a nation separate from the Austro-Hungarian Empire, a nation ruled by democratically elected leaders that would respect Slovak autonomy and culture. The Cleveland Agreement met with widespread approval among Czech and Slovak leaders outside of the United States, chief among them Tomáš Garrigue Masaryk (a prominent Czech nationalist and politician with a Slovak mother). Although short on specifics, the Cleveland Agreement provided enough of a foundation for a combined Czechoslovakian independence movement to rise in leaps and bounds as the war progressed.

The need for a more detailed agreement between Czech and Slovak nationalist became more and more pressing as it became increasingly apparent that the Austro-Hungarian Empire and its Central Power allies might lose the war. Masaryk in particular had spent much of the war seeking to convince the Entente Powers in Great Britain, France, Russia, and later the United States to support Czechoslovakian independence. He had even gone so far as to aid the Russians in recruiting a Czechoslovakian military unit known as the Czechoslovakian Legion, a unit that would eventually include over 40,000 recruits. Many Czech and Slovak nationalists, including Masaryk, believed that Entente leaders could be convinced to make Czechoslovakian independence a stipulation of any potential peace with the Central Powers as a means of weakening Austro-Hungary in any future conflict. With this thought in mind, a convention between representatives of the Bohemian National Alliance and the Slovak League was called in Pittsburgh to coincide with a visit by Masaryk to that city on Labor Day 1918. After Masaryk’s procession through the city on May 30, 1918 for an estimated crowd of 10,000, the Czech and Slovak representatives met the following day under the auspices of the Czecho-Slovak National Council in America (meant as a US counterpart to a similarly named organization in Europe). Their goal was to create a detailed blueprint for the governing of a combined Czechoslovakian state.

If they thought that task would be easy, however, they were quickly disabused of that notion by the activities of Slovak journalist and activist Jozef Hušek. As editor of the Catholic Slovak newspaper Jednota, Hušek had long opposed unity with Czech nationalists since so many were avowed secularists. With Czechoslovakian independence seeming increasingly likely in 1918, however, he had agreed to at least attend the negotiations taking place at Pittsburgh with the understanding that Slovak autonomy would be formally recognized in any final document. Many of those attending, including Masaryk, considered it unwise to enumerate specific Slovak rights in that document and consequently made early drafts deliberately vague when addressing the exact nature of the future relationship between Slovaks and the Czechoslovakian government. When Hušek threatened to withdraw from the proceedings and publicly proclaim his opposition to any agreement that resulted from them, Masaryk agreed to the inclusion of stipulations for a separate government administration, legislative assembly, and courts system in Slovakia as well as acknowledging Slovak as an official language of the future nation. Having reached an accommodation, Hušek and Masaryk both affixed their signatures along with over twenty others that day to a document that has come to be known as the Pittsburgh Agreement.

The Pittsburgh Agreement would go on to form the basis for Masaryk’s declaration of Czechoslovakian independence with the support of the Entente Powers in October of 1918. It also formed the basis for the provisional Czechoslovakian Constitution of 1918. Unfortunately for the cause of Czech-Slovak unity, Masaryk renounced the provisions of the Pittsburgh Agreement shortly after his election as the first president of Czechoslovakia in November of 1918. Over the course of his four-term presidency between 1918 and 1935, Masaryk continued to undermine Slovak autonomy. His policies ensured that the nation he helped create would remain united in name only. Slovak opposition to the national Czechoslovakian government only increased as the twentieth century progressed. The Slovak Republic declared its independence from Czechoslovakia with support from Nazi Germany in 1939 and, despite Czechoslovakia’s reunification by the Allied Powers in 1945, support for an independent Slovakian state remained high throughout the Cold War. The collapse of the Soviet Union in 1989 provided that support with an outlet. After a peaceful series of negotiations between Czech and Slovak leaders over the course of several years, Czechoslovakia was dissolved into the Czech Republic and Slovakia in 1993.