Listed on the National Register of Historic Places in 1980, this building was constructed as the warehouse for the Mandel Brothers retail store which was located on State Street. By the 1880s, Mandel Brothers employed roughly 800 people. By the mid-20th century, more than 3,000 Chicago residents worked for Mandel Brothers, making it one of the largest stores in Chicago. Business slowly declined in the 1960s, and the company went out of business in the 1970s. Once home to many department stores, State Street's retail area is now home to national retailers.

This building was constructed as a warehouse for Mandel Brothers, a former Chicago retail store on State Street. 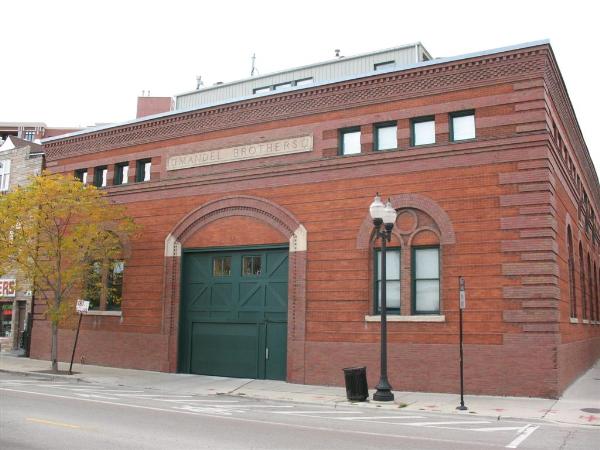 The historic, exponential population growth of Chicago during the late 19th century can be attributed to countless variables, both in the U.S. and abroad; the Mandel Brothers' warehouse represents one of those variables - mass marketing and consumer culture. Moreover, the building represents the heart of Chicago's consumer culture activity - State Street, once deemed "That Great Street," in a song Chicago that was written by Fred Fisher and published in 1922.1

The consumer culture of the Industrial Revolution coincided with the Gilded Age and the resultant development of large companies and wealthy entrepreneurs, which retail outlets embodied. Places like Macy's in New York and Marshall Field's in Chicago are most famous, but the Mandel Brothers were just as big, if not bigger, than Marshall Fields. The history of the store and warehouse also provide evidence of Chicago's German immigrant culture that helped the city grown and mature. The Encyclopedia of Chicago notes:

This retail enterprise, which would become one of Chicago's leading department stores, was founded in 1855 by Bavarian immigrants Solomon Mandel and his uncle Simon Klein. Their first store was located on Clark Street. In 1865, after Solomon's brothers Leon and Emanuel joined the firm, its name became Mandel Bros. Purchasing in New York and Paris and selling in Chicago, the enterprise grew. By the 1880s, its new store on the corner of State and Madison Streets employed about 800 people. By the beginning of the twentieth century, the workforce had grown to over 3,000 people. Rebuilt in 1912 and renovated in 1948, the State Street store continued to operate into the 1970s, when the company folded amid State Street's demise as a major retail center.2

The Mandel Warehouse was designed in 1903 by Holabird & Roche, one of the great firms associated with the Chicago School of Architecture. The warehouse's primary function comprised of storing dry goods, the principal items sold by the Mandels. Typical of the 19th century, notably in Chicago, labor strife accompanied many projects. As the warehouse was to head for construction, several labor strikes commenced, principally led by a newly formed group of horse team drivers. However, in the summer of 1903, an agreement was reached, allowing the warehouse to be built.3

Today the building is used as a residence, largely made up of urban lofts. However, the Mandel Brothers name remains on the outside, a sign of Chicago as it was a century ago.