Now the archival repository for the Jacksonville Historical Society, the Old St. Luke's Hospital, built in 1878, was the city's first established hospital and functioned as a such until 1914. The archive features rare photographs, diaries, maps, manuscripts, films and other items relating to city history and the history of Northeast Florida. The building itself was added to the National Register of Historic Places in 1972. 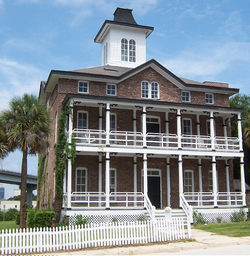 After the Civil War, Jacksonville became a big tourist destination. Those travelers to the city who got sick had difficulty finding hotel rooms to stay or hospitals that would take them in. Unfortunately, it took the passing of two of these tourists in the winter of 1872 to compel local residents to take action. Three women (Mrs. Theodore Hartridge, Mrs. Aristides Doggett, and Mrs. J. D. Mitchell) took charge and started a charitable society that would collect funds for a hospital. In March 1873, the society was able to buy a small two-room building as the new hospital. In 1876, a new brick hospital that was close to opening burned down. The process of raising funds began again and the current structure was built in 1878. It is not clear when it became the repository for the society.

This short drive through Jacksonville includes a variety of historic buildings on both sides of the river and also incorporates many of the city's museums, heritage centers, and parks.