The Wildwood House Museum is located in the historic home of General Alfred Beckley. The Museum opened in 1970 and the home is listed on the National Register of Historic Places. General Beckley founded the city of Beckley in 1838, constructing a log cabin where this stately home now sits. That structure was later covered with clapboard and painted white. The museum features antiques and exhibits that tell the history of Beckley and the region.

City founder Alfred Beckley lived in this home from its construction in 1836 to his death in 1888. 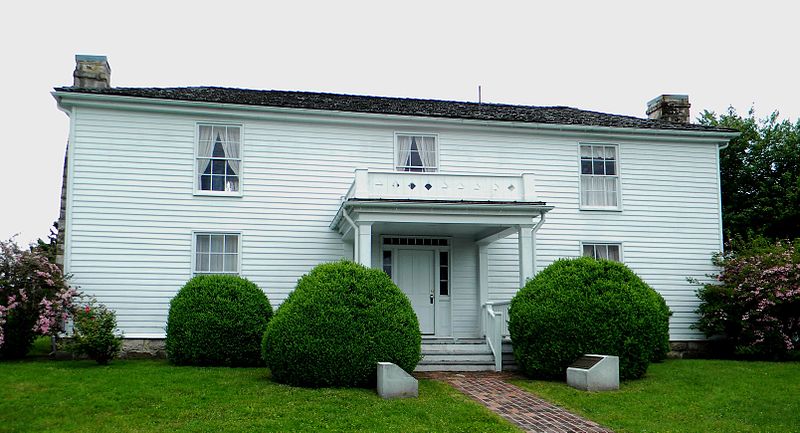 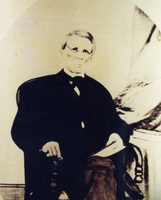 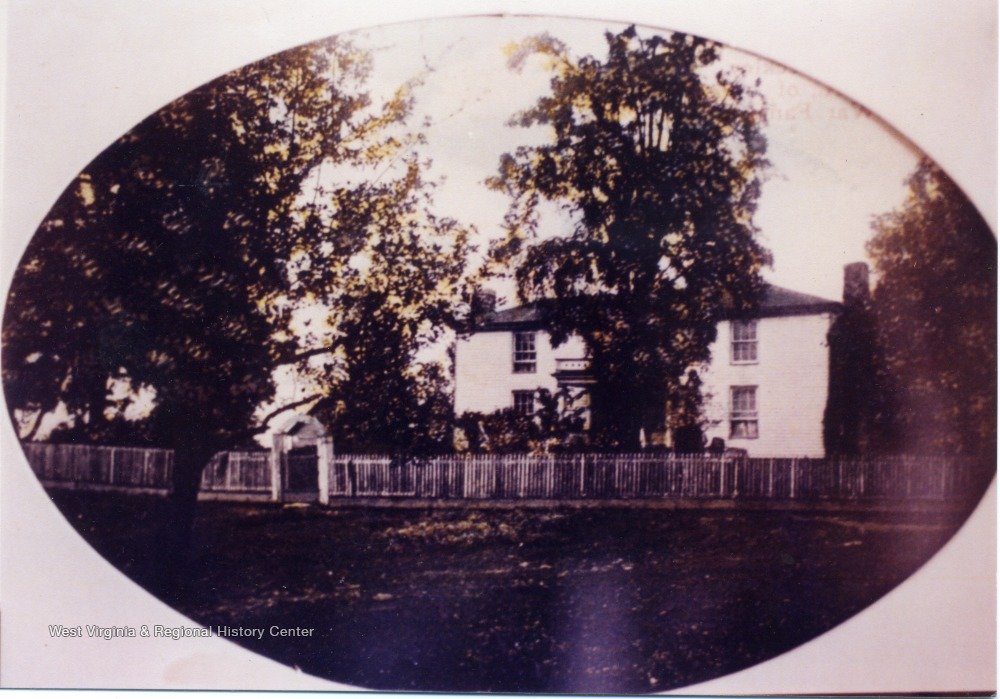 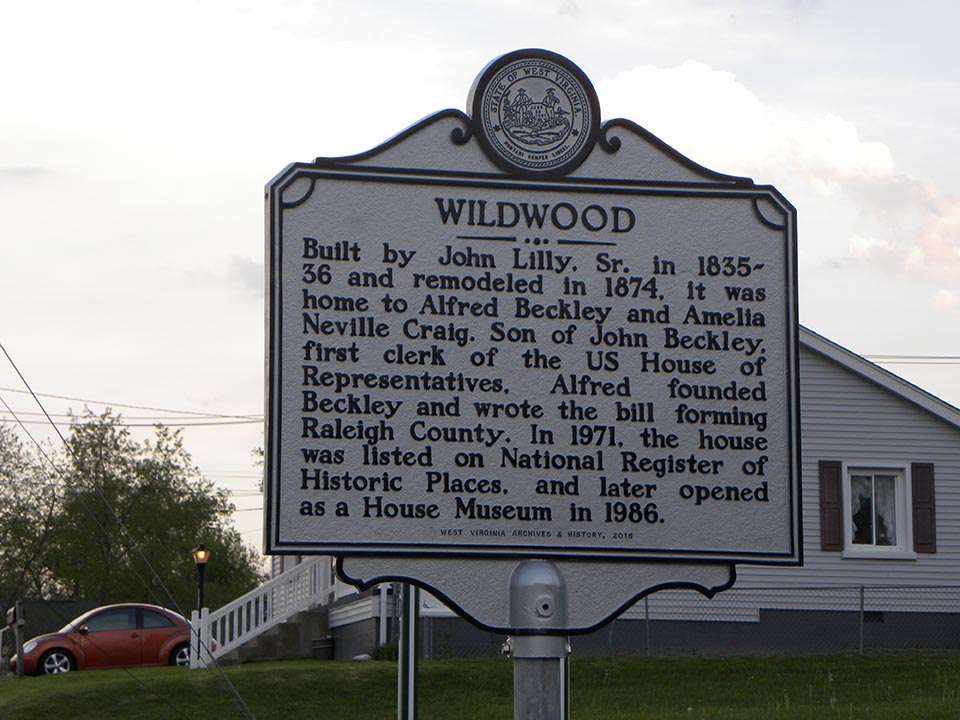 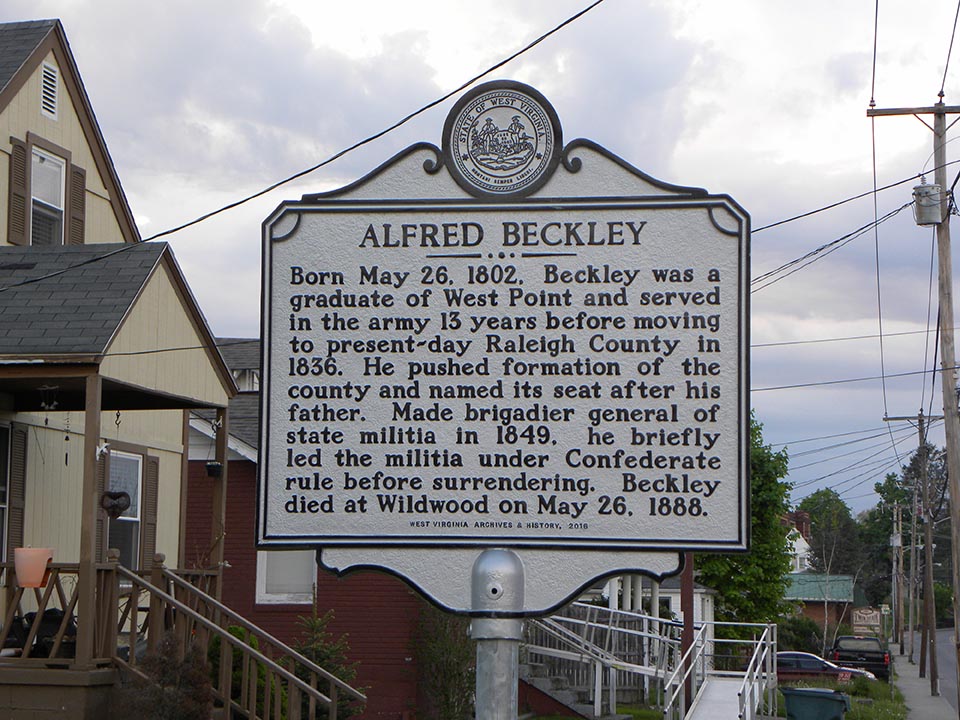 WV Historical Marker (next to the house) 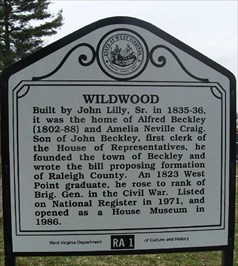 The property on which Wildwood would be constructed was once owned by John Beckley. John Beckley is the namesake of the city where Wildwood is located. He was a prominent early American in the region and a graduate of William and Mary College. Beckley was also a founding member of the Republican Party and served in such prestigious positions as the first clerk of the House of Representatives and the House of Delegates in Virginia. He also served as mayor of Richmond, Virginia for a brief time in 1783 and as Secretary of the Convention of Virginia. These positions are many others allowed Beckley to develop close friendships and working relationships with prominent politicians and military leaders like Thomas Jefferson, James Monroe, and John Adams.

The Wildwood home was built for his son Alfred Beckley. The younger Beckley was born in Washington in the year 1802. Beckley was raised by his mother after his father passed away in 1807. Thanks to a family friend, President James Monroe, Beckley was able to attend West Point and graduated in 1823. Although Beckley's father passed early in his childhood, he left Beckley almost 60,000 acres of land in what is now Raleigh County. Beckley and his wife moved to this land in 1836 after he resigned from the army. Together they built the Wildwood House with the help of John Lilly. What is now the city of Beckley flourished around the Beckley's homestead. The original double log structure was built in 1836 and a kitchen, dining room and porches were added in 1850. While additions were being made to the home, it was covered with clapboard and painted white.

In his home, Beckley spent hours contemplating the future of the area. From his home, he drew up a bill proposing the establishment of Raleigh County in 1850. After the bill was approved by the General Assembly of Virginia, Beckley was made the first Clerk of the Circuit Court. Following the Civil War, General Beckley dedicated the remaining years of his life to bettering the town he had established. He served as a lawyer, preacher, teacher, politician, and peacemaker. Beckley was born on May 26, 1802, and died exactly 86 years later on May 26, 1888. He was buried near the Wildwood House. Today the Wildwood House is a Beckley city landmark, owned by the Raleigh County Historical Society. The group gives tours upon request in the offseason. Wildwood House was added to the National Register of Historic Places in 1969 for its connection to General Beckley.

Open in summer on weekends, also available for tours with prior arrangement during the week.