Originally built in 1887, the Anclote Key Lighthouse was part of a chain of lighthouses constructed in the 1880s on the Gulf Coast to facilitate navigation. Reaching a total height of 110 feet, it played an integral role in helping the nearby city of Tarpon develop into a tourist resort town and become the country's sponge diving capital. It is no longer an active navigational aid but remains an interesting historical site to visit. The whole island is a state park. The lighthouse was added to the National Register of Historic Places in 1999. The only way to reach the island is by a personal boat; no public or commercial transportation is available.

Anclote Key Lighthouse was first built in 1887 as part of a chain of lighthouses built in the 1880s to provide safe passage on the shores of the Gulf Coast. 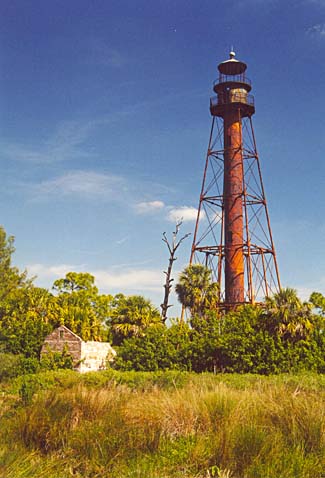 The lighthouse provided an immediate boost to Tarpon, which grew from a population of 200 in 1887 to around 2,000 in 1920. From the outset, people sailed to the island to picnic and relax. A number of notable visitors made the trip, including a Greek prime minister, former President Calvin Coolidge, and former Vice President Spiro Agnew. Interestingly, during the Spanish-American War in 1898, the keeper had a small cannon to defend the island in case of attack (it never was).