Basilica of the National Shrine of the Immaculate Conception

The Basilica of the National Shrine of the Immaculate Conception, "America’s Catholic church," is the largest Catholic church in the United States, one of the ten largest churches in the world, and the tallest habitable building in the District of Columbia. Constructed in the neo-Byzantine and neo-Romanesque style, the groundbreaking ceremony occurred in 1920. It has a capacity of 10,000 and is visited by an estimated one million pilgrims annually. The church is home to many works of art, including a mosaic donated by Pope Pius XI in 1923.

The main façade of the Basilica of the National Shrine of the Immaculate Conception. Image by Joseph V - originally posted to Flickr as Jesus Mountain, CC BY-SA 2.0, https://commons.wikimedia.org/w/index.php?curid=9601280 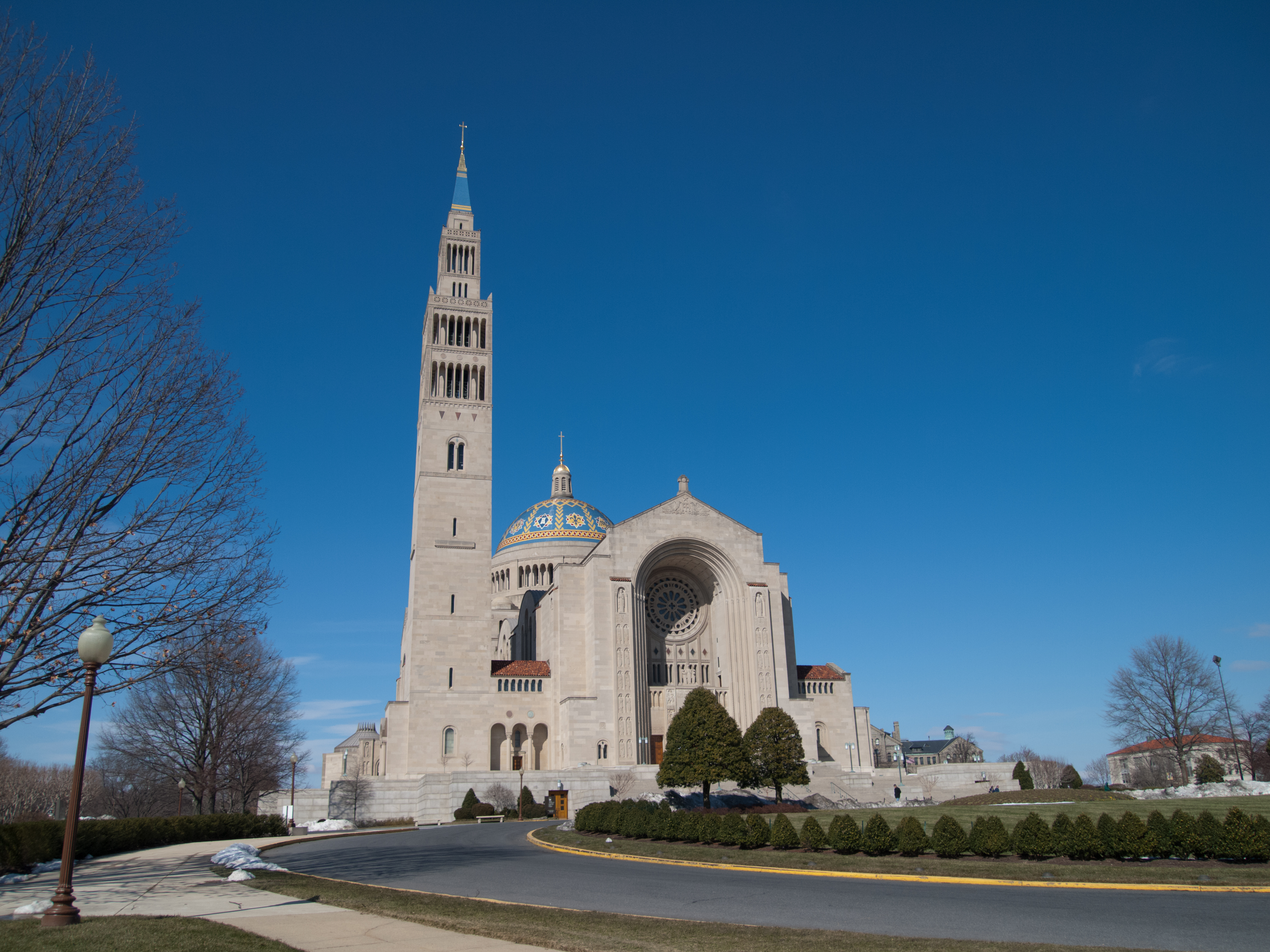 Interior view of the Basilica of the National Shrine of the Immaculate Conception. Image by Gryffindor - Own work, CC BY-SA 3.0, https://commons.wikimedia.org/w/index.php?curid=10621405 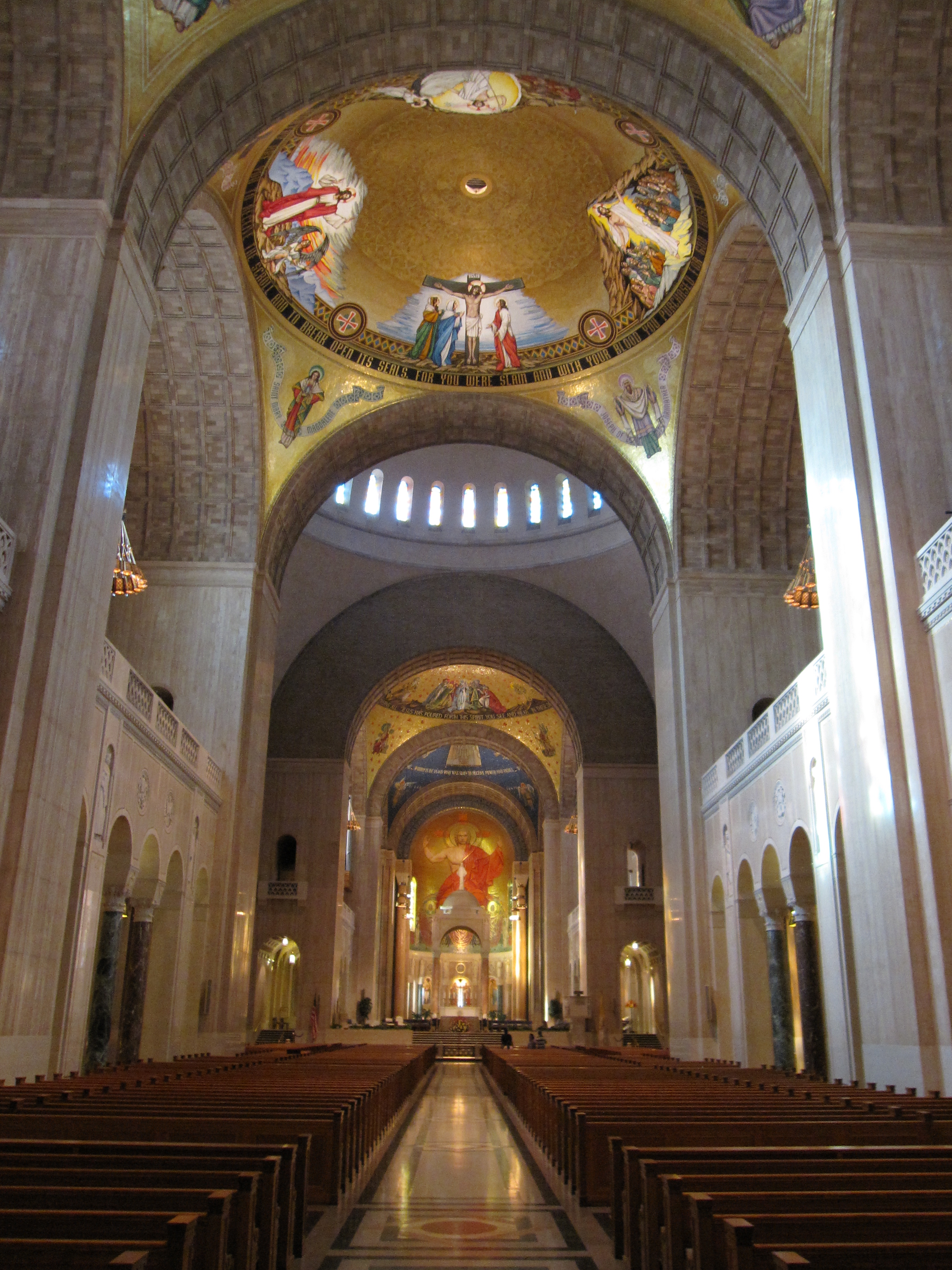 The construction of a magnificent Catholic church in the nation's capitol was first announced in a Massachusetts newspaper in 1846. The Basilica of the National Shrine of the Immaculate Conception is the realization of such a church. This Roman Rite Catholic basilica is the largest Catholic church in the country, and is designated both as the national and patronal Catholic Church of the United States. It also holds the distinctions of being one of the largest ten churches in the world, the tallest habitable building in the world, and houses what, in 1959, was the largest radiant heating slab in the world. The national shrine is dedicated to the Blessed Virgin Mary as the Immaculate Conception, the principal Patroness of the U.S.A.

The construction of this church was first proposed by Bishop Thomas Joseph Shahan, who received enthusiastic support and a personal financial contribution from Pope Pius X. He oversaw the effort until his death in 1932, and his is the only body interred at the national shrine. The architectural drawings were created by a Boston company, Maginnis & Walsh. On September 1920, Cardinal James Gibbons blessed the foundation stone. Work on the building, however, was temporarily delayed by the Great Depression and World War II. When it opened in 1959, the church was unfinished; it was not until 1961 that the basilica was completed.

The exterior of the basilica is 500 feet long, 240 feet wide, and 237 feet tall at its highest point: the top of the cross on the dome. The main (Trinity) dome is a mere 7 feet smaller than the dome of the United States Capitol building. This Greek-styled structure is primarily constructed of masonry, and defined by its numerous domes, columnns, and arches. The sides of the upper church and crypt are flanked by 70 chapels and oratories.

The basilica is designed after the Neo-Byzantine and Neo-Romanesque churches of the old world, and the decorative elements reflect a commitment to this style. Byzantine art, in particular, makes extensive use of mosaic and marble. There are an estimated 75,545 square feet of mosaic interior in the Basilica of the National Shrine of the Immaculate conception. The most notable of these include a mosaic of Christ in Majesty in the North Apse of the Great Upper Church, and a mosaic of the Immaculate Conception that was donated by Pope Pius XI in 1923.

Artist Jan Henryk De Rosen presided over the shrine's iconography committee, and was responsible for much of the décor (including the mosaic dominating the North Apse). The Crypt Church, modelled after early Christian Catacombs, features Roman-style arches and granite columnns. On display is the Papal Tiara of Pope Paul VI. Additionally, the church is decorated with polished stone statues, stained glass windows, and large ceramic medallions set in the ceiling. The combination of Guastavino (Catalan) vaulting and Mary Chase Stratton (Pewabic) ceramics is unique to this Basilica.

The Basilica of the National Shrine of the Immaculate Conception has been honored and visited by several popes. Pope John Paul II was the first reigning pope to do so. During his apostolic visit in 2008, Pope Benedict XVI bestowed upon the shrine the Golden Rose. Pope Francis visited in 2015 and held Mass on the east steps in celebration of the canonization of Junípero Serra, O.F.M. The basilica is also notable as the site of the funeral mass conducted for Supreme Court Justice Antonin Scalia in 2016.