The Orlando Depot circa 1910 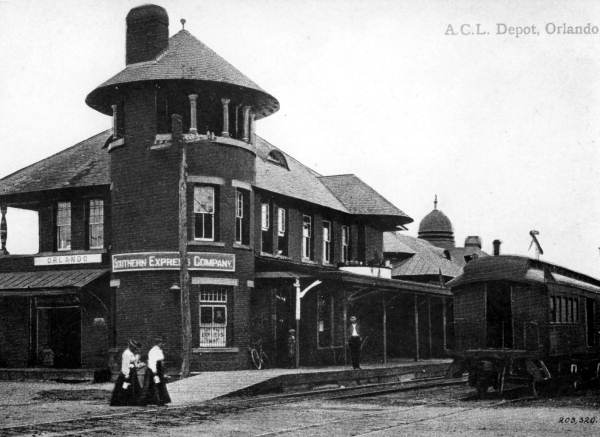 A recent photo of the area around the historic station, showing the development of a downtown entertainment and retail district. 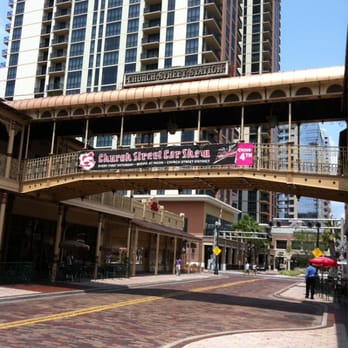 In the 1970s and 1980s, the station and surrounding area became a nightclub complex. It was very popular, as it offered a few nightclubs, catering to differing preferences and tastes in a single location. The venue was most popular in the eighties and closed at the end of the nineties. The concept was based on another club of Snow’s in Pensacola called Rosie O’Grady’s/ Seville Quarter Complex. The club at the station was called Rosie O’Grady’s/ Church Street Station.

In 1875, Orlando was a small town full of new settlers looking to build their lives and start businesses. It wasn’t until 1885 that Orlando officially became a city. The city’s first recorded railroad was called the Orlando Street Railway in 1886, which was a horse-drawn trolley on tracks which served as a means to get early settlers around the newly developing city and to various marketplaces in neighboring towns such as Winter Park. In 1889 the South Florida Railroad Company built Church Street Station and completed the railway connection project that connected Church Street Station and downtown Orlando to the northern coastal states. Eventually in 1893 Church Street Station was considered a better location for railway needs and deemed the Orlando Street Railway a nuisance and the tracks were later removed in 1896-97 which were the only street tracks in the city of Orlando’s history.

Orlando became a central point in Florida for the railway system project that had already been underway of connecting railways to various states and neighboring towns and cities up and down the east coast. This project was originally overseen and ran by the Henry Plant Corporation whose job was to expand the railway systems throughout the east coast, which was later purchased in 1902 by the Atlantic Coastline Company. Because of the railway connection project and the modernization of travel via railroad, Church Street Station and the new railway project was able to bring much-needed supplies and people into the heart of Orlando’s downtown business district. Church Street Station’s location was the key factor in this decision largely due to the many services it could provide at this location. Because of the success of the railway expansion project and Orlando’s growth in popularity, Church Street Station became an important depot location in Florida’s history and was ultimately responsible for the growth in population, the increase in supplies and a Central Florida location for tourists to visit during this period.

It wasn’t until the early 1900’s / 20th century that Church Street Station started seeing a decline in use which was much in part due to simpler travel options such as vehicles and planes. This caused a significant change in how commuters traveled, and the city opted to change the location of drop off and pick up for commuter travelers to the Orlando Health / Amtrak Station in 1926 where it is still located today just a short distance away. This and other unforeseen problems such as the burst of the land boom bubble, and eventually the Great Depression which followed shortly after was a perfect storm of conditions that caused this once bustling depot to decline significantly. As modern developments continued progressing forward, Church Street Station remained the same, and soon became less and less of a need and continued to suffer. It wasn’t until the 1970’s that Church Street Station saw a spark in business and an increase in use and popularity when a business man and developer Robert Snow purchased the location and envisioned a new Church Street Station. Snow’s vision of additional businesses, entertainment establishments, and restaurants led to its modern name and changed the locations name from Church Street Station to Church Street Station & Marketplace as we know it today. The addition of the Market Place, helped to revive the declining area by giving it a new purpose and use, instead of a once used nonproductive depot that it had become. Robert Snow paved the way for the future and proved that this location was still a viable asset to Orlando with many purposes and opportunities for growth.

Snow sold the location in 1989 to Baltimore Gas & Electric, and the Walt Disney Corporation developed and opened Downtown Disney keeping the majority of tourists away from downtown Orlando. With the location seeing another drastic decline in revenues and popularity, city officials and councilmen were given the responsibility to help revive Church Street, and the downtown Orlando business district.

With the recent developments of luxury apartments such as 55west in 2010, including the new Amway Center as well in 2010, Church Street Station & Marketplace is once again poised for a revival. With additional concepts such as the commuter rail system Sunrail, in 2014 designed to bring tourists and the local community into downtown to enjoy all the sporting events, concerts and nightlife the city have to offer. In 2016 the city also began construction of a new soccer stadium for the newly acquired MLS soccer team the Orlando City Lions which will bring thousands of soccer enthusiasts and fans directly into the downtown Church Street Station & Marketplace location for these events.