Base of the Ephraim Totem Pole. Taken by Shelly Lutes. 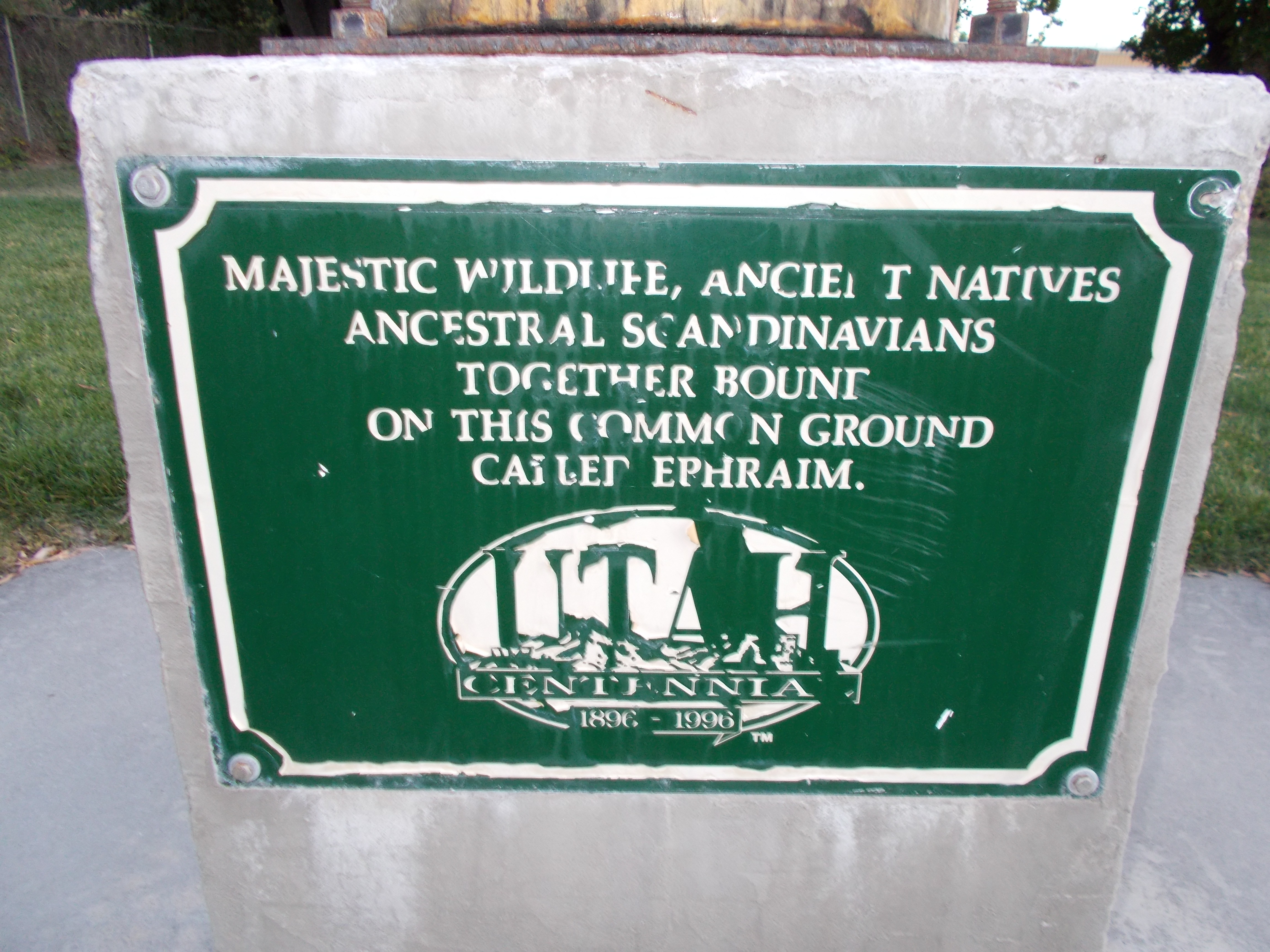 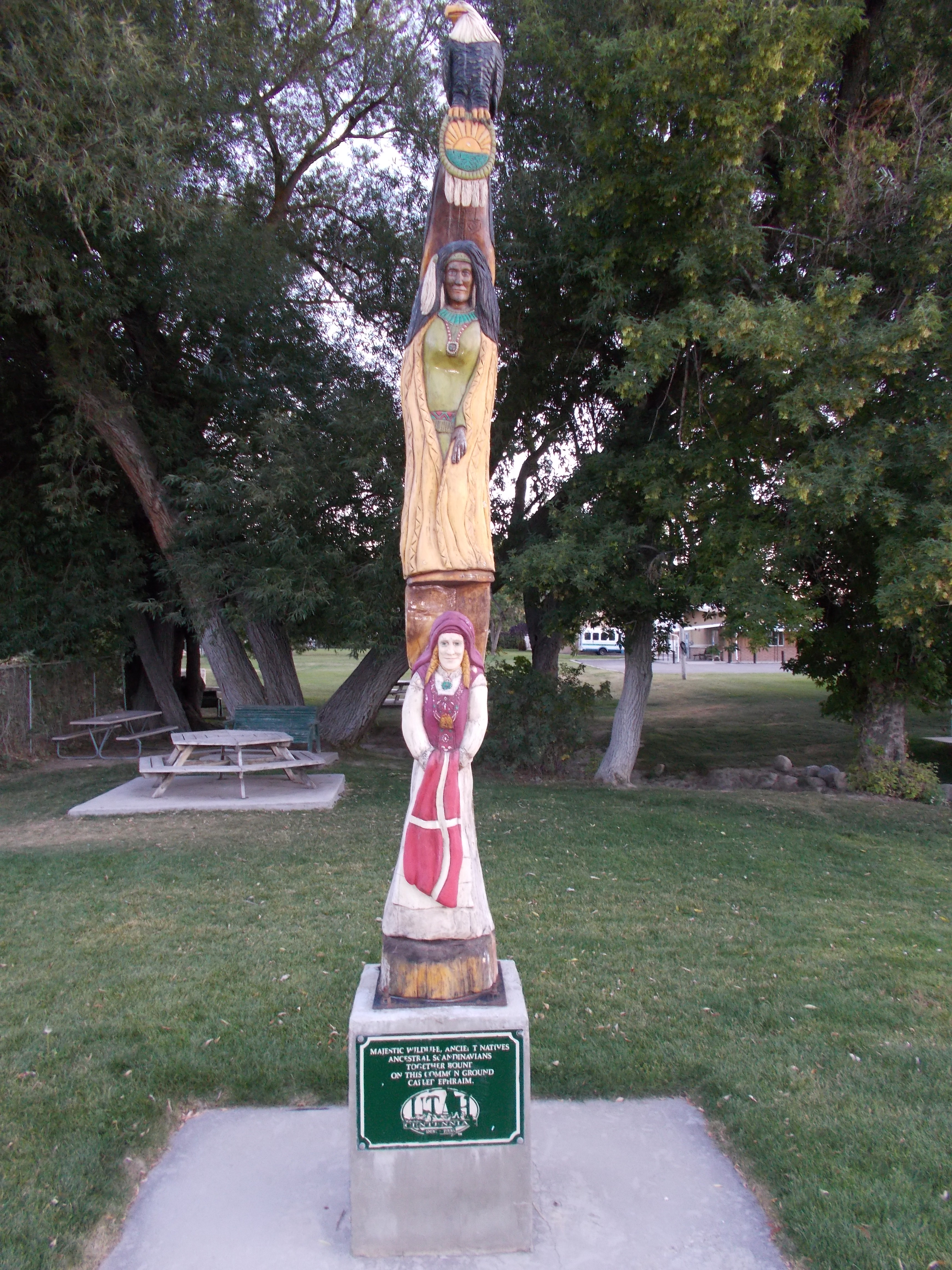 Totem Poles have many different purposes; they can stand as grave markers, memorials to a person or event, family emblem, a tribute to a revered ancestor, and many others. While they represent all these things and more, they are not used for religious purposes. Totem poles have animals and humans carved into them, sometimes in harmony with each other. The word “totem” refers to ancestor or a guardian, and in very few cases is worshipped within their families. The peak of carving these extravagant memorials was from the early to late 19th century when metal tools were easily accessible. Hiring a carver to carve a totem pole was very expensive and still is today, which is why they are somewhat uncommon and very valuable. The Ephraim Totem Pole serves the purpose of memorializing the union between the Native Americans and Scandinavians in Sanpete County.

The Ephraim Totem Pole is in the town of Ephraim, Utah in Sanpete County.  Ephraim has a rich Mormon Pioneer heritage that began in 1852, when Isaac Behunin and his family settled in a dugout in the area near where Pioneer Heritage Park now is. Because of cultural differences between the settlers and the Native Americans along with concerns the Native American’s had for their depleting food sources over nearly two decades, many tragic conflicts arose. These conflicts ended up being a part of what is now known as the Utah Black Hawk War from 1865 to 1872. The war was named Black Hawk because the Ute Indian Chief, Antonga Black Hawk of the Timpanogas Tribe, led warriors in raids against the Mormon settlers to protect his people, their lands and their way of life. Eventually, the settlers and the Indians came together and made peace to end their long-time contention with each other. In the last few years of his life, Black Hawk travelled to every town he had harmed and apologized for his actions. This was a remarkable act of heroism and forgiveness toward his enemy, the white settlers, whose coming changed the way of life for his people ever after.

As Utah’s centennial celebration drew near, Mark and Susannah Nilsson wanted to memorialize the history of Ephraim’s early Native American and Scandinavian settlers. They came up with the idea to represent three aspects of Ephraim’s heritage in a totem pole style monument. The monument represents the natural wildlife of the area with an eagle at the top; it represents the Natives who lived there when the pioneers came with a Native Woman in the middle; and finally, it represents the Scandinavian settlers, with a Scandinavian woman at the bottom. This totem pole is carved out of one of the large Black willow trees that once stood in Heritage Pioneer Park where the totem pole is located.

The monument was carved by an unknown itinerant artist, living in his van and selling small carvings along the roadside. Susannah stopped and talked with him and asked if he would come to Ephraim and carve the project. He agreed as he had carved other large statues though out Utah for other parks. He came to Ephraim, parked his van across the street from the park where the totem pole now resides and worked on it for three weeks. When it was finished, the city workers of Ephraim poured the cement base to erect the centennial memorial. The bottom of the monument says:

Together Bound On This Sacred Ground

•           One little known fact about the totem was that the day the city crew came to set it up and bolt it down to the cement base, the wood cracked and split. The city crew glued and clamped it back together; it has held together these past 20 years.

•           Antonga Black Hawk’s remains were permanently interred at Spring Lake, Utah, on May 4, 1996, just three weeks prior to the erection of the Ephraim Totem Pole over the Memorial Day weekend of the same year.

To learn more about the Utah Black Hawk War please feel free to click the link below.