Casa Blanca today is a unique community of 113 distinct homes, set on 19 acres with three heated swimming pools, two tennis courts, a Rose Garden and Cactus Garden. The entrance to the property features two Moorish towers that give us a glimpse into its past, with architecture that dates back almost a century. 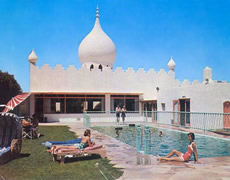 A circa 1958 aerial view looking northeast at the Casa Blanca Airfield. It shows the hotel buildings in the foreground, with a single aircraft on the asphalt taxiway leading to the runway. (Scottsdale Public Library) 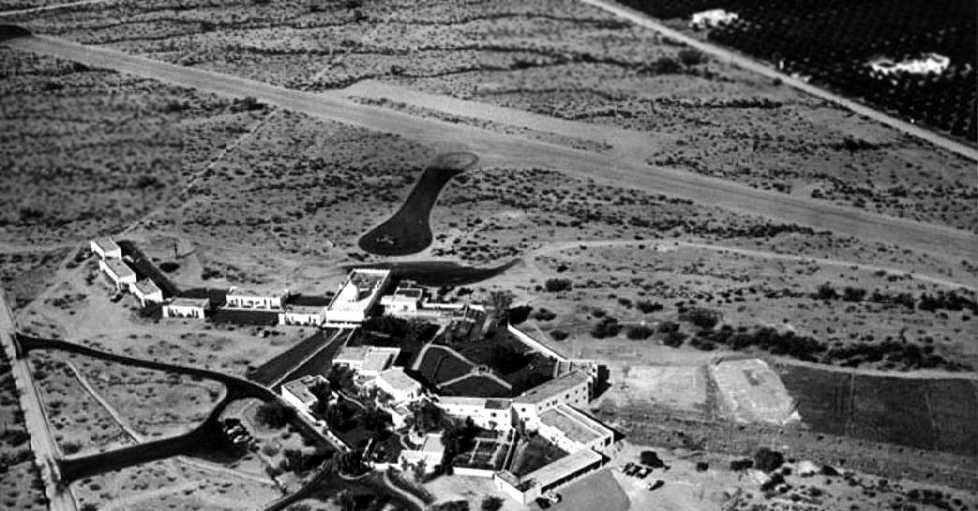 The Casa Blanca Inn Airport was described in the Aerodromes table on the 1956 Phoenix Sectional chart as having a single 2,800' bare runway. (John Voss) 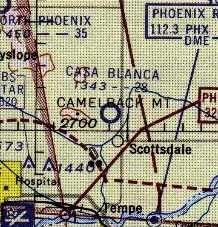 A 2011 aerial photo shows that some of the buildings of the original Casa Blanca Inn still stand on the southwest side of the site, but no trace of the former airfield remains. 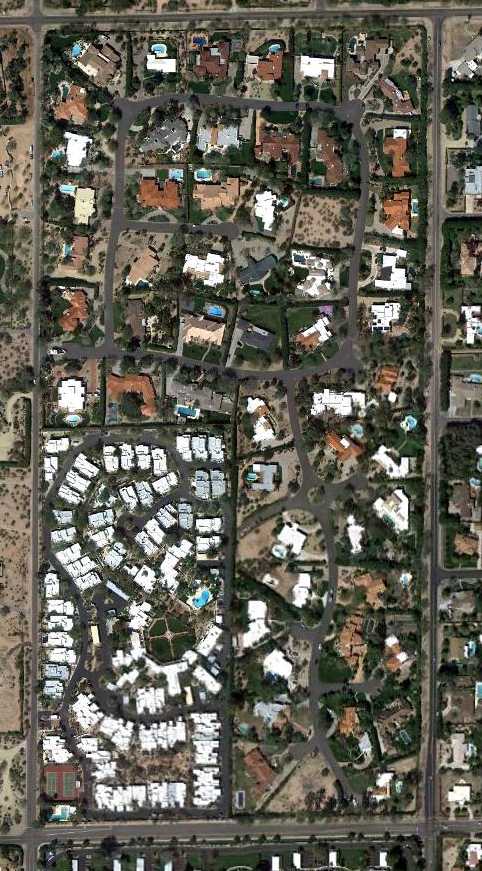 The original ranch structures complete with barn and horse corral were designed and built in the 1920s by architect R.T. Bob Evans (also designed Jokake Inn) for artist Donald Kellogg of Illinois. Donald passed away shortly after construction and the ranch eventually was sold to the Charles W. Borg family of Illinois. George Borg, inventor of the automatic transmission, used the home as a winter retreat for family and employees of the Borg Warner Corporation.

Borg had an extra wing constructed onto the home in the shape of a Morocan-style dome. Folklore has it that George was such a boisterous drinker that he was thrown out of all the bars in nearby Scottsdale. So he built his own bar with an onion-domed roof, which later became a restaurant at the Casa Blanca Inn. The dome would also serve as a landmark for Mrs. Borg who was an avid pilot. In the 1940s, Borg had a 2,600' dirt airstrip constructed that stretched diagonally across the property from the corner of what is now Chaparral Road and 68th Street to the corner of Casa Blanca Drive and Jackrabbit Road.

The Borg's sold the property in the fifties to a group of investors, headed by R. Treadway, whose intent was to establish a first class desert resort. This was the beginning of the Casa Blanca Inn, a five star property that operated continuously for the next 30 years, boasting "Charm, Diversity of Amusement and Perfection of Appointments". The onion-domed bar became The Sultan's Table restaurant and cocktail lounge where regardless of expense, "every necessary device and appliance was installed to enable the chefs to achieve the highest standards of the culinary arts.
The adjacent horse corral, which served up chuck wagon suppers to the strains of real cowboy music was sold off, along with the runway, to finance improvement and upgrades to the resort, but the economics of the 198Os and the opening of several new Scottsdale resorts were to spell the demise of the Casa Blanca Inn. The Inn was sold to a development group who converted a number of the old buildings around the Rose Garden and the restaurant into condominiums (Phase I). In the mid 1980s, architect John Gardiner and master builder, George Christensen were commissioned to design Phase II - a collection of quirky single and tri-level homes with The Cactus Garden as its centerpiece, two tennis courts and a heated lap pool. The third phase of development took place in the 1990s. This added 39 single level detached homes with garages on the site of the resort's northern guest wing.
Casa Blanca Airport

This little airport was located on the grounds of the Casa Blanca Inn, adjacent to the east side of Camelback Mountain. Casa Blanca Airport was apparently built at some point between 1945-48,  as it was not depicted on the 1945 Phoenix Sectional Chart (courtesy of John Voss). The earliest reference to the Casa Blanca Airport, which has been located, is the 1948 USAF Phoenix Urban Area Chart (courtesy of Scott O'Donnell), which depicted it as having a single northwest/southeast runway.

In the 1950s, when the resort was opened to the general public, the guest list mainly included the Hollywood elite coming to Arizona. The airstrip was used by guests staying at the Inn that wanted to land their personal aircraft in order to avoid the general public at Sky Harbor Airport.