The 1929 Squaw Peak Inn has changed its use over the last many decades. Originally a private residence, it then became a ranch, an Inn, a famous resting stop for celebrities and back to a private residence. Some of the original buildings exist today. Piestewa Peak is a popular place to hike in Phoenix.

1940s photo of guests at the Ranch/Inn

Portion of Inn that still stands 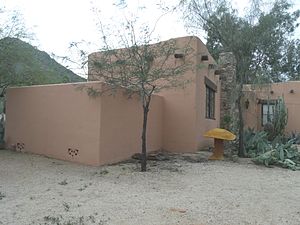 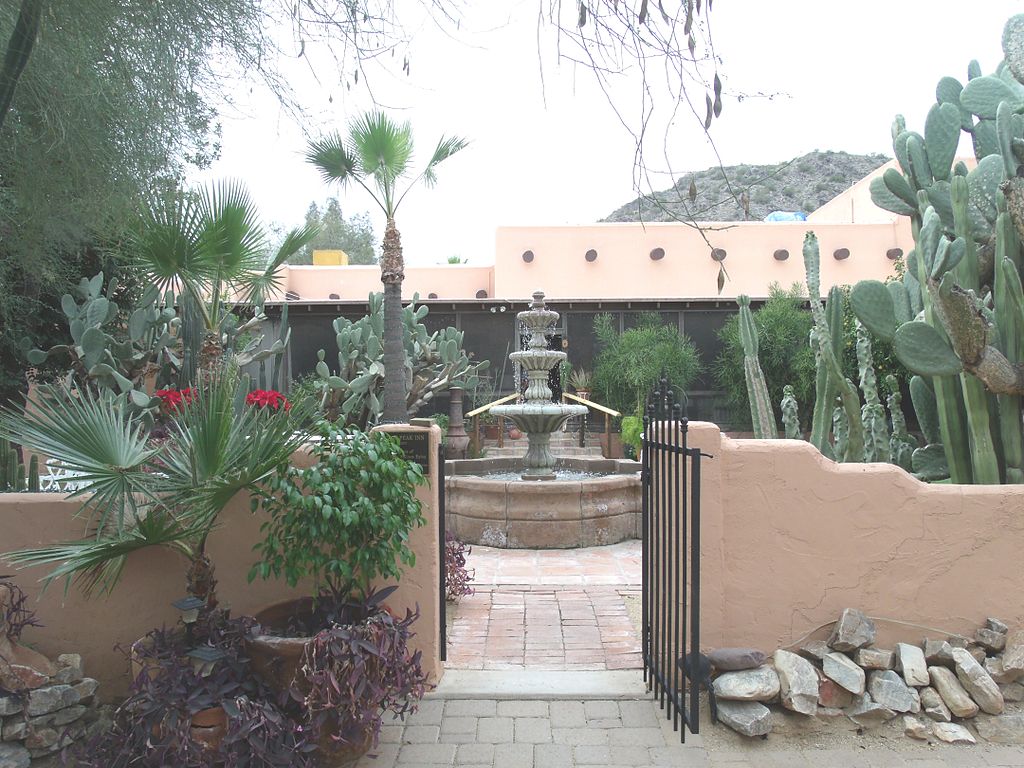 Another angle of the Inn 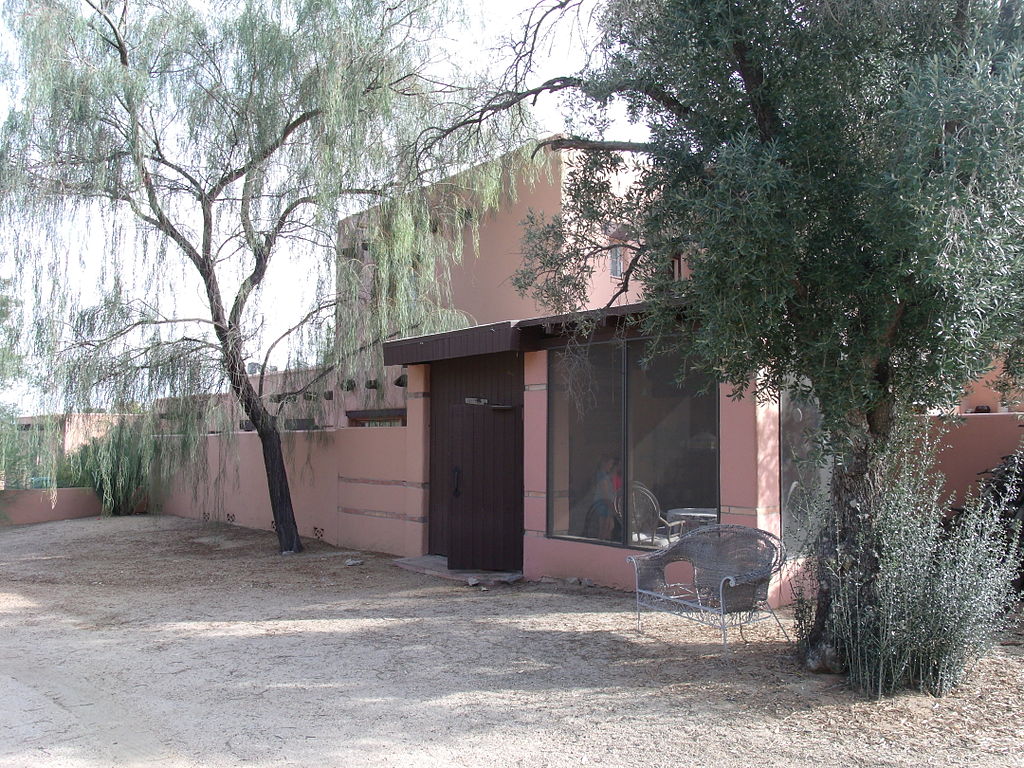 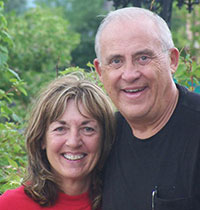 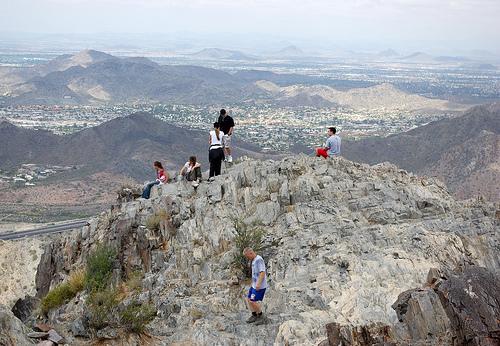 Piestewa Peak is located in central Phoenix. The mountain, which is made up of igneous and metamorphic rocks such as schist, quartzite and quartz, was known by the Pimas Indians as 'Vainom Do'ag', which, in their language,  means Iron Mountain. The mountain was given the name "Squaw Peak" in the 19th Century by white settlers. In 2003, the mountain was renamed Piestewa Peak in honor of Army Spc. Lori Ann Piestewa, the first known Native American woman to die in combat in the U.S. military, and the first female soldier to be killed in action in the 2003 Iraq War.

In 1929, William Eugene D'Allemund built the first building constructed on the property which was to become known as the Squaw Peak Ranch. It was a 2-bedroom, 1-bathroom frame-and-stucco house. D'Allemund used it as a residence. The house featured a flat roof with parapet, a large fireplace constructed of mortared native stone, and high ceilings in the living room and two bedrooms.
In 1937, William A. and Emily Stopford purchased an 800-acre parcel near the east end of Squaw Peak Mountain for $25.00 an acre. They built a home, designed by Stopford, in the center of their parcel. The ranch house consisted of a living room, two bedrooms and two baths. Adobe bricks were used and the labor force included local Native Americans. By 1943, they converted the house into a guest ranch which they named the Squaw Peak Ranch. Frank Lloyd Wright, who was a friend of Stopford, often brought architectural students to the ranch to point out an example of appropriate architecture for the Southwest. In 1944 the Stopfords sold the property to George A. and Patty D. Judson, who added slot machines to the guest ranch. They sold the ranch in 1946 to the Jenk's.
The Jenks removed the slot machines and made additions and improvements to the property and its surrounding areas. The ranch was renamed in 1946, and since then became known as the "Squaw Peak Inn". Inns are generally establishments or buildings where travelers can seek lodging and, usually, food and drink. They are typically located along a highway or in the country. According to the local news, over the years several  well-known people were at one time or another guests of the Inn. Among those mentioned were Clark Gable, Robert Taylor, Dick Powell, June Allyson, Dr. William Vaughn and Mamie Eisenhower.

In 1961, the O'Malley Investment and Realty Co. purchased the property.
The O'Malley's rented the property to Willis and Margery Betts. The Betts, however did not agree with the fact that the rental agreement was renewed twice and discontinued operating the Inn. On July 1, 1976, the property was purchased by Dr. Ted Diethrich who wanted to convert the property into a site for the Arizona Heart Institute. However, his plan was met with opposition by the neighbors in the growing residential subdivision that surrounded the Squaw Peak Inn.
The property changed hands several times during the following years until it was purchased by the Malouf Brothers who developed the Doubletree Canyon subdivision in the area and sold off 800 acres of land. Only 80 acres, including where the Inn was located, remained.

Rebirth in the 1980s
The abandoned property fell into disrepair. Only two of the original houses remained, the rest were destroyed. Water had eroded the sun-dried adobe bricks of the original structure. The entire north face of the building was significantly damaged by the erosion. The Malouf Brothers intended to destroy the remaining buildings. This did not happen because on October 21, 1980, the developers sold a parcel of just under two acres with the two remaining buildings to William "Bill" and Ann Epley.
Both historic buildings were in bad shape, however after consulting structural engineers, the Epley's decided to restore it. They modernized the kitchen and bathrooms and built a garage. Ann Epley added some of her own touches including her hand-made tile. The main historic building is used by the Epley's as their home.
In 1987, the Inn was the major focal point for the made-for-TV movie titled, "Probe: Plan Nine from Outer Space." The movie is about aliens who resurrect dead humans as zombies and vampires to stop humankind from creating the Solaranite (a sort of sun-driven bomb). The structure was also used in May 27, 1993, as a backdrop for an interview of then future Basketball Hall of Famer Charles Barkley for ABC's Prime Time Live.

The Epley's encourage people to visit the area. They even maintain the following website about their historic home. http://squawpeakinn.com/index.asp