Operated by the Coastal Heritage Society, the Pin Point Heritage Museum preserves the unique Gullah-Geechee culture that has existed in this area. Gullah-Geechee refers to the mixed African and European culture created by West African slaves after they were brought to Georgia (and South Carolina) in the 18th and 19th centuries. The museum is housed in the renovated former A.S. Varn and Son Oyster and Crab factory, which Varn established in 1926. The museum features multimedia presentations, photographs, artwork, artifacts and oral histories of the people who lived here and made a living in the seafood and fishing industry.

Pin Point Heritage Museum helps preserve the Gullah Geechee culture that emerged on the Georgia and South Carolina coasts in the 18th and 19th centuries. 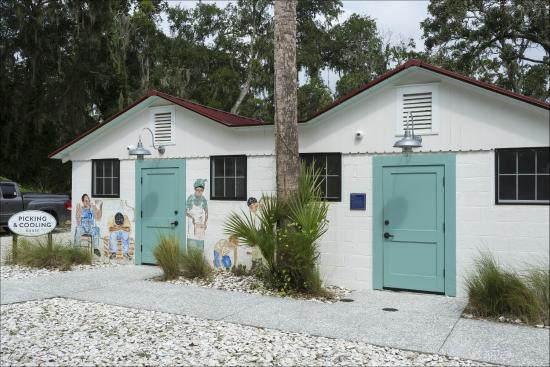 In the early 1920s, the demand for canned seafood started to increase and the environment of marshy islands of Georgia's coast was a perfect place to fish and collect oysters, crabs and other animals. However, the combined factors of increased pollution beginning in the 1950s and the construction of the Diamond Causeway, which increased settlement buildup, led to the eventual closure of the factory in 1985. People's livelihoods effectively ended and with it the Gullah Geechee culture here, which was essentially isolated, became threatened. The museum preserves this culture and its history.