Located on Hilton Head Island, the Chapel of Ease was built circa 1786 under the direction of Isaac Fripp and Captain John Stoney. In 1868 the chapel was abandoned and destroyed. The location of the Chapel of Ease is now marked by Zion Cemetery and the Baynard Mausoleum. The Baynard Mausoleum was built by William Eddings Baynard. Today, the vault of the mausoleum is empty.

Built in 1846, the Baynard Mausoleum is the oldest structure still standing on Hilton Head Island. 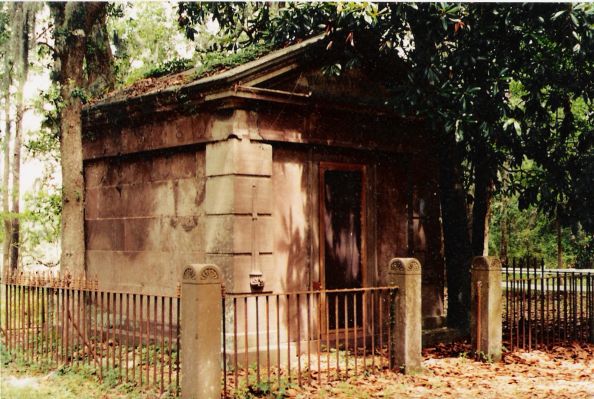 The Chapel of Ease was built around 1786 on Hilton Head Island. It was constructed under the direction of Isaac Fripp and Captain John Stoney and dedicated in 1833. The communion service was imported into the church from London in 1834. In 1868 the church was abandoned and destroyed.

Baynard’s family made the large mansion, formerly owned by Captain John Stoney, their home. Following the invasion of Hilton Head at the beginning of the Civil War, the mausoleum was broken into and vandalized by grave robbers. The vault remains empty today.2