The Hole In the Rock

The Hole in the Rock is an area where early Latter-day Saints passed through on their way to settle new land from Cedar City. It is where they spent about six months to carve out a road in the rock, so they can get their wagons and cattle through the valley. It was a long a strenuous journey, and it is memorialized by this location. The Hole in the Rock was added to the National Register of Historic Places in 1975.

Map of the whole trail. 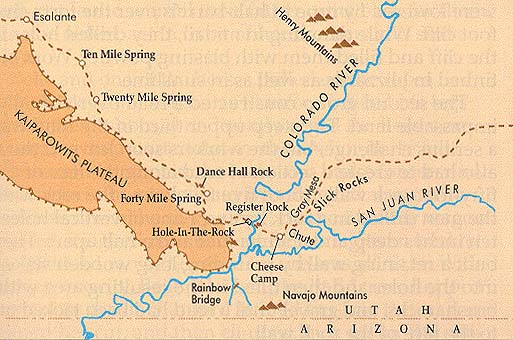 A painting of the journey by artist Lynn Griffin.

Hole in the Rock opening. 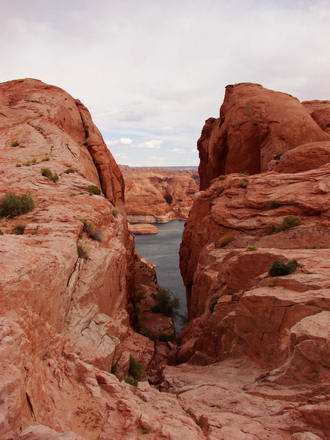 The “Hole in the Rock” expedition was the result of a conference held by members of the Church of Jesus Christ of Latter-day Saints (LDS), which was held in Parawon and Cedar City, Utah in December of 1878. During this conference, John Taylor, the LDS prophet, called some LDS members to go on a mission for an important cause. LDS members were asked to leave their homes and lands to settle new areas or teach others about the church. John Taylor called on members of the church to go on the “San Juan Mission.” Seeking to settle the area in San Juan County on the banks of the San Juan River. Silas S. Smith, a member of the LDS church, was called to be the leader of the band of 250 pioneers.

These LDS pioneers had no idea where the proposed settlement area was located or what the journey would look like. All proposed routes to San Juan County settlement were long and dangerous. Escalante, LDS bishop A.P. Scow, and an LDS member Ruben Collette told the pioneers that had found a shorter and safer route to the San Juan River. They had found a narrow crevice in the Colorado Plateau that led down the Colorado River and that this route would be the best way to establish their new settlement. This crevice was in the west wall of Glen Canyon, at a high plateau above the Colorado River. This route through the crevice appeared to be a shortcut when compared to an alternate trail that was at least four hundred miles long. Their journey was only supposed to last six weeks. This crevice had a 45-degree angle tilt in some places and was dangerous. These pioneers underestimated the difficult circumstances through which they would travel to arrive at their destination.

On October 22, 1879 a total of almost 250 settlers and more than 80 wagons left to go settle on the banks of the San Juan River, planning on going through the crevice in the wall of the Colorado Plateau. The pioneers planned to travel ten miles a day until they reached their destination. When the pioneers had reached what they call “Forty-Mile Spring,” they camped for the night. Four scouts from the group were sent out to find a route that would take them down to the Colorado River. They found the 45-degree angle crevice and came back to the camp to let the others know. The company spent one week at Forty-Mile Spring exploring different routes to take, but it seemed that going through the crevice was the only route. A lot of the pioneers feared that it was impossible for them to pass through what Platte Lyman, a pioneer in this company, called “the worst country I ever saw.” The LDS pioneers were told that this county had been explored previously and found feasible, but this was a mistake.

A meeting was held to decide if they should continue or turn back. Jens Nielson, a Danish immigrant, declared that they should go on whether they would be able to make it through or not. Then through his Danish throat Nielson said, if they had enough “stickety tootie” they would succeed. It is thought by LDS members that Nielson was trying to say stick to the truth, meaning stick to what you know to be right, or stick to your duty. The decision was made that they would continue their journey to San Juan, through the crevice, which where work began on the Hole-in-the-Rock trail down to the Colorado River.

Benjamin and Hyrum Perkins, stout coal miners from Wales, drilled and blasted a trail wide enough for a covered wagon to go down the first part of the hole, a sheer drop of 45 feet. To complete the next section of the trail, they drilled holes in the stone face and inserted oak staves. The oak staves were then covered with perpendicular poles, brush, rocks, dirt, and gravel to widen the path enough for a wagon. Other groups worked in the lower part of the canyon and they moved the debris that was blasted down from the upper sections. The debris was used to make the path more level further down the trail. The other groups also worked on a trail on the other side of the river, so they could continue their journey. These men camped at the Hole-in-the-Rock site, and worked six days a week, only coming back to camp on Sunday to visit their families.

In late January of 1880, the Hole in the Rock trail was ready for the first wagons to descend. The road was three quarters of a mile long with an average slope of 8 feet every 16 ½ feet. Some places on the road plunged down at a 45-degree angle. The first wagons attempted the descent on January 26, 1880, with the back wheels rough locked with chains, and moored by as many as twenty men anchoring ropes to the back of the wagon. Because how of the rough road, the descent proved to be difficult and precarious. When the entire group reached the bottom of the road, they were met by a ferry ran by Charles Hall. Hall’s Ferry took the wagons across the river, so they could continue their journey. Through the dangerous descent, not one wagon tipped over and not one animal was killed. This was a miracle to the settlers, because if a wagon had tipped over or they had lost any animals it would have made the already long journey even longer.

One of the pioneers, known only as M.D., sent this description of the challenges of the Hole-in-the-Rock trail to the Salt Lake Herald after they had settled: “On coming in sight of the Colorado River we find ourselves situated on the summit of a precipice some 1500 or 2000 feet above the water. The road enters the top of a crevasse or split in the rocks, which has been hewn wide enough at the bottom to admit of the passage of a common wagon, yet the hubs almost touch on either side… and is so steep that it takes an average horse team 130 pulls to haul an empty wagon from the river to the top.” In a separate letter that was published in the Salt Lake Herald from the same writer, he stated, “We have had the worst time I have ever had in my life. We have come down hills of solid rock, with both hind wheels rough, locked down, and nearly tipped over frontwards.”

On April 6, 1880 the pioneers settled on the bank of the San Juan River and named their establishment Bluff City. A journey that was supposed to take 6 weeks took 6 months. David E. Miller, author of a book called the Hole-in-the-Rock stated, “In all the annals of the west, there is no better example of the indomitable pioneer spirit than that of the hole-in-the-rock expedition. None ever demonstrated more courage, faith, and devotion to a cause. They proved that virtually nothing was impossible for a zealous band of pioneers.”

If These Walls Could Talk. Bluff, Utah: Hole in the Rock Foundation, 2015. DVD.