The Civil War Unknowns Monument is a burial vault and memorial dedicated to those unknown soldiers that lost their lives in the Civil War. Constructed in 1866, it is located in the grounds of Arlington House, The Robert E. Lee Memorial, at Arlington National Cemetery in Arlington, Virginia. It lies just west of the Lee Flower Garden where Civil War soldiers were interred starting in 1864, owing to a lack of suitable burial grounds. The structure has changed considerably from its original design.

Image of the Civil War Unknowns Monument at Arlington Cemetery 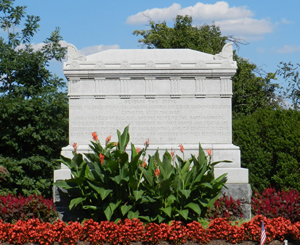 Detail view of the monument that shows the original inscription, which was retained even after the redesign

The Civil War Unknowns Monument was initially constructed in 1866 and is one of the oldest Monuments at the Arlington Cemetery. It was created to honor unidentified soldiers who lost their lives fighting the in Civil War. It lies near the Arlington House in the Lee Flower Garden, which was once a grove of elk and oak trees.

There are 2,111 bodies buried in a masonry vault underneath the monument, fallen soldiers found on the battlefields of Bull Run and on route to Rappahanock. They lay scattered in trenches and across the fields. Some of these individuals were unidentifiable, and sometimes only part of the body could be recovered. In such cases. those who could not be identified were gathered in front of Arlington House, which sat on Robert E. Lee's sprawling Arlington Estate. This was done in part because of Quartermaster Montgomery C. Meigs' dislike of Lee, as the move would deny Lee the use of his home.

In 1862, the U.S. Congress had passed legislation that would authorize the federal government's purchase of land to create national cemeteries for military dead. The existing cemeteries, Soldier's Home and the Alexandria Cemetery, had served to inter war dead near Washington, D.C., but both locations had reached maximum capacity by 1863. Following the 1864 Battle of the Wilderness, in which a large number of Union troops perished, Meigs ordered the search for a suitable site in which to bury the dead. He eventually chose the Arlington Estate for its pleasing view and its location on high ground. In 1864, he authorized the burials.

Originally, the monument was designed as a plain sarcophagus. However, by 1893, the walls and lid were replaced to feature a more ornate design. Its lid features twenty-two bas-relief stars inside circles and four stylized, partial fleur-de-lis decorations. The entire structure was elevated and placed on a granite base. Additionally, Rodman guns were driven muzzle-down into the earth, and pyramids of shot were placed on pathways leading up to the memorial. Quartermaster Meigs would draw inspiration from this monument when designing his own tomb.

This Monument was the first monument at Arlington to be dedicated to soldiers. The original inscription states:

Beneath this stone, Repose the bones of two thousand one hundred and eleven, Unknown soldiers, Gathered after the war, From the fields of Bull Run, And the route to the Rappahanock, Their remains could not be identified. but their names and deaths, Are, Recorded in the archives for their country, and its graceful citizens, Honor them as of their noble army of martyrs.  May they rest in peace. September A.D. 1866.1