The U.S.S Sequoia is a former Presidential yacht, used from the term of President Herbert Hoover to that of Jimmy Carter. The ship was outfitted with a galley, guest bedrooms, a presidential stateroom, and a dining room, all used for hosting the President, Vice President, and important political guests. The ship was decommissioned in 1977, and is currently under the ownership of The Sequoia Presidential Yacht Group. It was designated a National Historical Landmark in 1987, and is docked at the Gangplank Marina in southwest Washington, D.C.

U.S. Navy photograph of the USS Sequoia traveling down the Potomac River near Washington D.C. 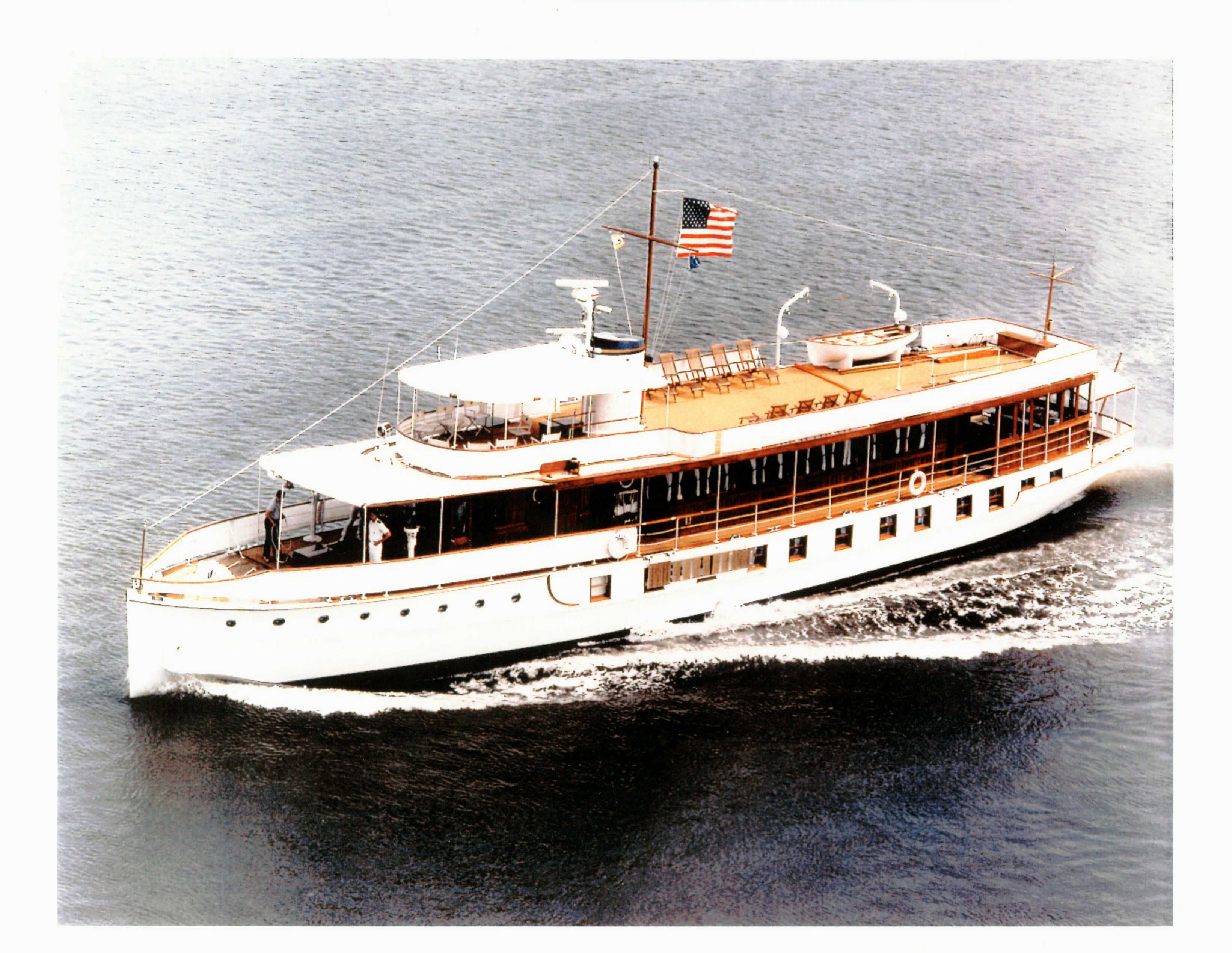 The U.S.S Sequoia was originally named Sequoia II. It was built at a shipyard in Camden, New Jersey, in 1925/1926 for a cost of $200,000. The Sequoia II served as a private yacht. It is 104 feet in length, can travel up to 12 knots, and has a  ship's complement of 10 people. The original owner, Richard Cadwalader, eventually sold her to William Dunning, the president of the Sequoia Oil Company in Texas.

The ship was purchased by the United States Department of Commerce in 1931 for use during the Prohibition era. The Sequoia would often be used as a decoy in order to catch bootleggers, posing as the yacht of wealthy men. The Sequoia was relieved of its Prohibition duties in 1933, and became part of the U.S. Navy. Once in the Navy, the Sequoia was given its USS status, and was then used as the presidential yacht. However, the Sequoia only held its U.S.S status until 1936, as Winston Churchill allegedly would not drink on a Navy ship. As a result, the Sequoia was decommissioned as a Navy vessel.

Regardless of its decommissioning, the Sequoia continued to be used as the presidential yacht for several decades, as well as the yacht of the Secretary of the Navy. Notorious for its high maintenance costs, President Jimmy Carter had the Sequoia sold at an auction in 1977 in order to symbolically demonstrate the government's commitment to spending cuts (the ship cost the US Navy $800,000 dollars annually). Since the Sequoia was sold off, it has changed hands numerous times, and is currently under the ownership of the Sequoia Presidential Yacht Group. Congress vied to purchase the ship back as recently as 2004, but the ship remains under the ownership of the Sequoia Presidential Yacht Group. As of 2010, the U.S.S Sequoia is docked at the Gangplank Marina in southwest Washington, D.C.

This ship has hosted numerous distinguished guests, from US Presidents and Vice Presidents to foreign ambassadors and visitors. For example, Richard M. Nixon negotiated the SALT I arms treaty with Leonid Brezhnev and Anatoly Dobrynin aboard the ship. John F. Kennedy held strategy meetings regarding the Cuban Missile Crisis and had his last birthday party on the Sequoia. Ronald Reagan once met all 50 state governors at the gangplank. Dwight Eisenhower even once lent the ship to Queen Elizabeth II when she visited the U.S. The U.S.S Sequoia is also notable as America's first handicapped-accessible boat, having undergone modifications to better accommodate the needs of Franklin D. Roosevelt.

Please visit the official website for information about rental.