The colonial charter of Savannah prohibited Roman Catholics from settling in Savannah. This prohibition faded shortly after the American Revolution. French Catholics established the first church in 1799 when they arrived from Haiti after slave rebellions began on that Caribbean island in 1791. A second church was dedicated in 1839 as the number of Catholics increased in Savannah. Construction began on the new Cathedral of St. John the Baptist in 1873 and was completed with the addition of the spires in 1896. 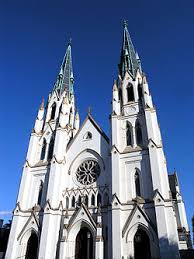 Renovation did not occur again until the years between 1959 and 1953. The Cathedral would now have an entrance plaza, lighting upgrades, and heating and cooling. The renovation was decided and directed by Reverend Thomas J. McDonough.  Next, Reverend Raymond W. Lessard, the twelfth bishop of Savannah decided to make some changes. He decided to close the church until the decaying timber foundations were fixed. Lessard wanted to replace the timber with concrete.  This happened in the year of 1984-1985. Shortly after these changes, many more occurred. Reverend J. Kevin Boland, the thirteenth bishop of Savannah, wanted to do many changes to the Cathedral. The changes included, paint scheme, murals, stained glass, stations of the Cross, new paint, and a new roof. These changes took until November 2000.  Today, the Cathedral is welcomed to guests, and guests can even take tours to see this beautiful Cathedral.