The Castle Gate Mine Disaster Memorial stands just off of highway 6 in southeastern Utah to remember the events on one fateful day. On March 3, 1924 in Castle Gate Mine No. 2, gas and coal dust exploded killing every one of the 171 miners who were working. The rescue effort took nine days and an additional man was killed from the intake of carbon monoxide.The disaster struck the community hard. Two weeks before the explosion the company fired as many single men as they could. The result was that the explosion left most of the families in the area without any income as most of their husbands and fathers were killed.

Entrance to the #2 mine portal at Castle Gate. This is the mine that exploded and resulted in 172 deaths.(LDS Ward Relief Society of Castle Gate) 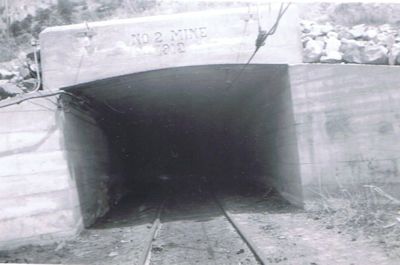 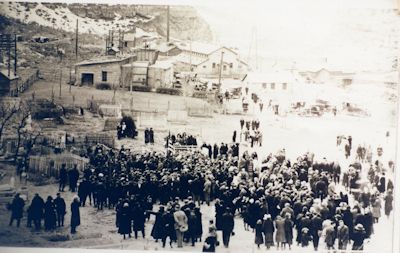 Photograph of the Castle Gate Cemetery as it stands today.(LDS Ward Relief Society of Castle Gate)

The Castle Gate Mine Memorial stands just off of Highway 6 very near to where the old town once was. The commemorative plaque has all of the names of those who died in the mine.(Castle Gate Mine Disaster Memorial - Castle Gate, Utah) 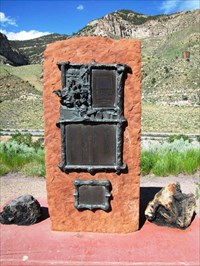 The cause of the explosion was believed to be a gas leak that exploded when one of the bosses attempted to relight his lamp when inspecting the leak. The ensuing explosion supposedly knocked out all of the other miners lamps and as they tried to relight their own they caused a second explosion which killed all those that had survived the first blast. Finally a third explosion occurred minutes later that caused a massive cave in of the mine.

News of the disaster swept fast across the nation and even made national headlines in The New York Times on March 9, 1924; the headline reads: “Explosion Entombs 173 Miners in Utah; Gas Blocks Rescue.[1]”   The following day the paper told the sad outcome,“30 Bodies found in Utah Coal Mine; No Hope For 145”. The Castle Gate Mine Disaster, at the time, was the third worst mining disaster in United States history and in Utah history, second only to the disaster at Winter Quarters Mine, that took the lives of 200 miners.

Nearly one year later a thousand people showed up for memorial that was held for those who lost their lives in the disaster. The Castle Gate Cemetery now stands as a memorial to those who lost their lives and ended the history of the small mining town. The cemetery is also the final home to other residents of the community but stands as a memorial for those who dedicate their lives to coal mining. The cemetery is located just off of highway 191 and is separated from the mine disaster memorial by only a few miles. Today, the cemetery is overgrown with weeds, and dotted with tin markers, but the beautiful memorial remains and contains the names of those who perished in the mine.

More information about the Castle Gate mining disaster and cemetery can be found in the Western Mining and Railroad museum in nearby Helper, Utah and contact information can be found below. The museum has a room dedicated to Castle Gate and pictures of the town.To this day mining continues in the areas near Castle Gate. Mining in the area with its accompanying dangers. As recently as 2007, the Crandall Canyon Mine Disaster took the lives of six miners who were trapped and died. Both the Castle Gate Mine and Cemetery memorials offer examples of the region’s rich history in mining and serve of a reminder of the now abandoned town.