Located in Savannah, GA, this custom house was constructed between 1848-1852; it was one of three built in Georgia around this time period and is the oldest federal building in the state. The customhouse provided an office for employees of the US Custom Service, which collects taxes on imported goods, prevents smuggling and fraud, among other duties. The building was designed by John S. Norris in the Greek Revival style. It was added to the National Register of Historic Places in 1974.

The Customhouse was built in 1852 and is the oldest federal building in Georgia. 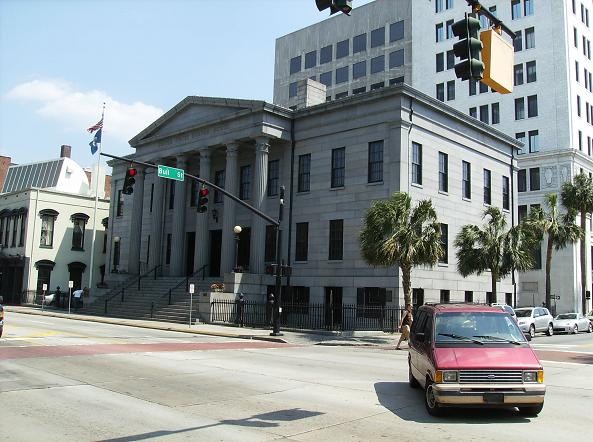 The building material for this US Customhouse is especially significant in terms of architecture, because it is built entirely out of stone that has fireproof qualities—a main concern of the citizens of Savannah, and Norris himself, as the city had had several fires in recent years. The US Post Office occupied the basement; custom services offices were on the first floor and the federal courts were located on the second floor.

A cast-iron fence featuring spindles that have tobacco leaf and fleur-de-lis decorations surrounds the massive gray granite structure, which has the title "United States Custom House" emblazoned across the facade. The greatest piece of architecture within the building is perhaps the staircase. It is beautifully constructed, made to look like each step is supporting one another without the typical perpendicular structure of a regular stair case. It is made completely of granite with a sold, iron railing for support.
The US Customhouse in Savannah, GA has changed hands a few times, particularly during the Civil War. It was under Confederate possession for a brief period of time when the Succession Ordinance was adopted by the Georgia State Convention. Although, in 1864, General Sherman captured the Customhouse and it was again under possession by the United States. Even more significantly, in 1869 the Savannah Customhouse employed the first African American Customs Collector, Colonel John H. Deveaux. The history of the site, not just the building, is perhaps even more important than its functions. The building was constructed on the site where James Oglethorpe's one-story frame house sat, and he lived in this house for a time, around 1733 when he founded the Colony of Georgia. He was also responsible for drawing up plans for the city of Savannah. Another notable thing that highlights the significance of this site even further, is on the rear lot was the federal court house as well as the tabernacle church were Rev. John Wesley preached his first sermon in America.
The US Customhouse is still used for its original purposes, mostly. It was added to the Register of National historic Places in 1974 after it had been listed as a contributing property to the Historic district in 1966. This building is a symbol of Savannah as a port city in previous centuries. Although it is not a museum, there are exhibits that showcase contraband the Customhouse has found.