The former state capitol serves as the first home of the University of Iowa and is now a National Historic Landmark. 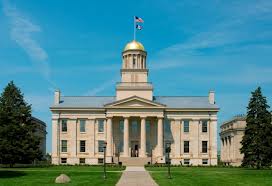 As the University of Iowa grew, the Old Capitol served as a library, chapel, and classroom and office space. The building also held the law school and continued to function as a classroom and office building until the 1970s. University presidents had their offices in the building as well. In the early 1970s, the state and the university decided to completely restore the historic building as a museum that preserves and shares the history of the state and the university. The structure is one of the most significant historic buildings in the state and one of only a few National Historic Landmarks in the area.