The Morikami Museum and Japanese Gardens is a center for Japanese arts and culture located west of Delray Beach. The park and museum are named after George Morikami, a native of Miyazu, Japan, who donated his farm to Palm Beach County to be used as a park. George Morikami was the only member of the Yamato Colony, a community of Japanese farmers and their families established in 1904 with the purpose of helping revitalize Florida's agriculture industry which had been struggling since the Civil War. Morikami was the only one of the colonists to stay in Delray Beach after World War II. The museum is modeled after a Japanese villa. Exhibition galleries surround a courtyard with a traditional Japanese dry garden. Sixteen of the museum's 200 acres feature gardens showcasing the major periods of Japanese garden design as well as a world-class collection of bonsai trees. The rest of the property feature hiking trails, lakes and picnic areas. The museum houses 7,000 objects and artifacts including 500 tea ceremonial items and 200 textiles and fine art pieces. Rotating exhibits, monthly tea ceremonies, and educational outreach programs are also offered.

Morikami Museum and Japanese Gardens was established in 1977. 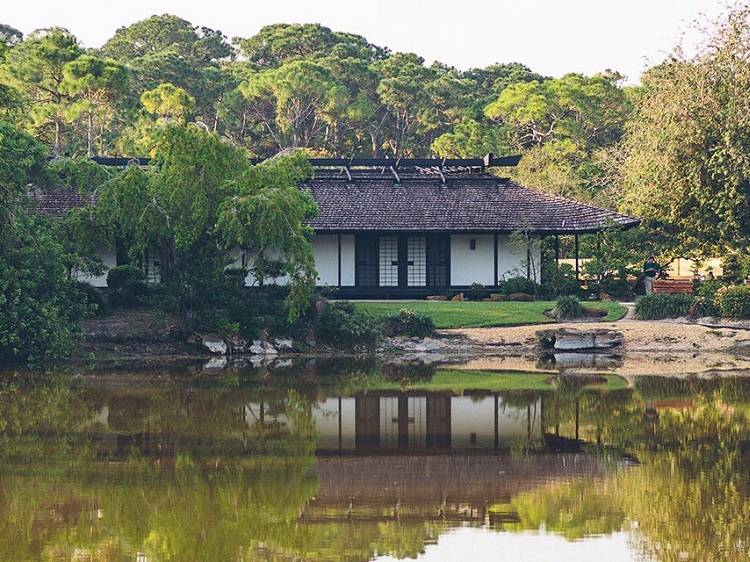 The idea for the colony belonged to Jo Sakai, a graduate of New York University, who, in 1903, traveled to Florida to propose the establishment of Japanese agricultural colonies. His proposal was received with great enthusiasm. It was hoped that the colonies would, by experimenting Japanese crops, revolutionize the state's agricultural industry. Sakai traveled back to Japan to recruit other young men. They arrived in Florida in 1904.

By the 1920s, however, it was clear that the colony (only one was established) had failed. At its height, there were only 30-35 farmers (many were single but some brought their families here) at the colony. Initially, they tried to grow pineapple, but competition from Cuba forced them to grow vegetables. After the American entry into WWII, the government seized the land to establish an Army Air Corps technical training facility. George Morikami bought land back towards the end of the war. He began his effort to donate his land to the county in 1963 for the purpose of creating a park in honor of the colony. The county finally accepted the gift in 1973.