The Sanford Grammar School as it appears today. It closed indefinitely in 2015. Photo: Ebyabe, via Wikimedia Commons. 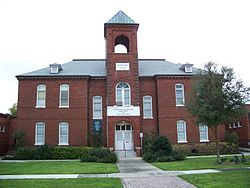 Children playing outside the school in 1945. 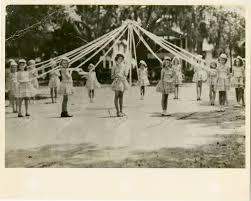 The Sanford Grammar School's original location was the Sanford High School in 1902. W. G. Talley had designed this school in 1902, and it was in the Romanesque revival style.  In 1911 the high demand for schooling and high supply of students led to a new building, the Westside Grammar Elementary School, which is now known as the Sanford Grammar School. It was not an easy task to get the city's approval for the new school, but when they did, they were granted $75,000 to construct it. Soon after, the Women's Club hosted a fundraiser in 1921 to raise money to build a lunchroom in the school, which was highly successful and the lunchroom was built on October 10 of that year. The school operated until at least the 1980s. Unfortunately, the lunchroom was torn down despite many objections from the town in 2008.