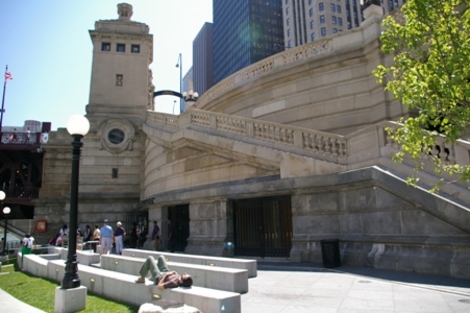 The DuSable Bridge (The McCormick Bridgehouse & Chicago River Museum) speak Chicago’s transformation from a Native American community and trapping town to a modern, major city.  Indeed, Chicago’s trifurcated character -- divided three ways by its rivers -- has played a large part in Chicago’s history. The bridge represents the human decisions that made Chicago a place for which to invest and live - a society changing from rural and local economies to that of cities and expanding marketplaces.1The bridge's location is now located near the River Museum. It was “the first double-deck, double-leaf, fixed Trunnion Bascule bridge ever built," designed by architect Daniel Burnham 1909.2

Chicago has existed as a home to Native Americans, trappers and Fort Dearborn because the rivers served as a place of easy navigation to Lake Michigan, as well as a place for access to water, food and trapping grounds. However, the evolution of expanding marketplaces and industry made Chicago a prime spot for speculators and investors, as the rivers and Lake Michigan converging on Chicago made it a potentially near-perfect central point for trade and shipping, notably by the 19th century. Soon after investors roamed in to help create the I&M canal and take advantage of Chicago’s natural water highways, railroads arrived. Chicago’s population grew immensely in the latter half of the 19th century - but that was also a problem. Chicago’s natural waterway system included two pitfalls -- the ground in Chicago was quite swampy in nature, and it was difficult to traverse the city as the rivers proved to be difficult to cross. As such, bridges were needed to connect the north, south, and east portions of the city. But the turn of the 20th century, city planners such as Daniel Burnham looked to modernize the city and bridges were one of the major parts of that plan.3

Chicago’s infamous “Mag Mile” - the skyscraper-laden shopping, hotel, and service-orientated district of Michigan Ave is largely a result of Daniel Burnham and the Commercial Club -- architects organized to create The Plan of Chicago (1909). Although they could not have foreseen how it would evolve in modern times, they made it a primary focus to connect the city’s north and south sections over the river that separated it -- and Michigan Ave was the road they wanted to use. They spent thousands of dollars promoting that specific part of the plan, hiring a publicist and otherwise making it a point to sell the idea. To them, it was not only a good move for the city’s logistical needs, but one that would benefit the city financially, thus helping those, like the Commercial Club, with a vested interest in the city’s success.4

Today, for five dollars, visitors can enjoy a 360-degree view of the Chicago from atop the Bridgehouse, view the inner-workings of the bridge lifts, and possibly witness live bridge lifts (although, that is limited to roughly forty times per year). The museum opened in 2006 and educates visitors on the Chicago River and its help in developing Chicago.5

The bridge opened in 1920 for commercial traffic use and is a popular pathway for a Chicagoan today. The bridge and its four bridge-houses were designated as a Chicago Landmark in 1991.

The museum's location provides a glimpse into Chicago's history, as well as that of the nation and globe. Once filled with Native Americans who named the area "Chicago," the location is not far from the residence of Chicago's first Anglo-American resident, John Kinzie - a trapper and friend to many Native Americans. He also befriended and traded with both the French and English who roamed the region. The river stood as a prime location for trapping. Later, the navigational advantages of the rivers into Lake Michigan also made it a prime spot for a Fort - Fort Dearborn, which helped the city grow.

The river always remained a place of navigation, but modern advances required one transport over the river, both for residential and business purposes. The city had grown crowded during the Industrial Revolution and modern-day engineering helped alleviate that issue. Today, one can look down the river and see an array of restaurants, bars, and roaming tourists, as well as businesspersons - the river now exists as a place where money is exchanged and leisure is attained. All of that is done in the shadows of towering skyscrapers, largely designed as a result of advances made by the same designers who helped build the bridge. Today's Chicago is the result of societal changes that made Chicago a place of commerce, and now a place of modern city living. And the bridge is a lasting symbol of that transformation.