The Berrien County Historical Association was established in 1967 to restore the 1839 courthouse as a historical museum. 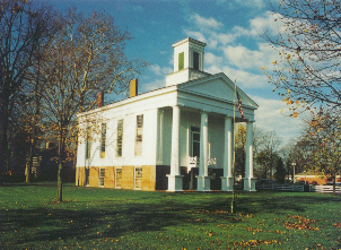 The Berrien County Courthouse, listed on the National Register of Historic Places, stands as one of the Midwest's oldest government buildings. Largely used as a courthouse the first fifty years, it served as community center, military hall, and eventually a church. The Berrien Country Historical Association (BCHA) now maintains it as a landmark and museum.

Although many attribute Roman Republicanism to the Nation's founding fathers, Greek Revival buildings, like the 1839 Courthouse, emulated the architecture of ancient Greece, which many early-nineteenth-century Americans admired as the birthplace of democracy. In that era, westward expansionism, frontier life, and figures such as Daniel Webster represented an America that related more to Ancient Greece's greater wildness and freedoms.1

Judge Epaphroditus Ransom of Kalamazoo presided over the first case, in April 1839, involving Robert White of nearby Niles who stood accused of stealing a pair of boots, socks, and mittens with a total value of ten dollars. White was convicted and sentenced to a year in the state penitentiary.

Many of the county's citizens -- almost all males -- attended court cases in those days. One could find spittoons scattered about the courtroom, as males often engaged in chewing tobacco. In addition to its function as a courthouse, The Berrien Country building served as a community center, which allowed for dances and theater productions. The residents also used the structure as a meeting hall, political staging area, wedding spot and funeral hall.3

After completion of the new courthouse in St. Joseph in 1896, the Berrien Springs courthouse saw use as a community center, dance hall and militia drill hall. In the early 1900s, buildings on the square served as the first campus for nearby Andrew's University. In 1917, the courthouse became the local Seventh-Day Adventist Church. By the mid-1960s the entire complex was in poor condition. Some people considered demolishing the unoccupied courthouse after the village church relocated to a new building.

In 1967, representatives of local history groups throughout Berrien County organized to save the courthouse and restore it as a county museum. They formed the Berrien County Historical Association [BCHA] as a private nonprofit corporation to care for the buildings on the square and to interpret county history.

Today, the BCHA manages Courthouse Square for the County of Berrien, which owns the buildings and grounds. As a county-owned building, the 1839 Courthouse is registered as an officially active Michigan courthouse, although now used mostly for ceremonial functions...The courtroom appears much as it did in 1839. Most furniture items in the building are reproductions. The large table in the hallway is original to the courthouse square and possibly served as a jury table. Attorneys occupied the table in the middle of the room in front of the judge's bench.4