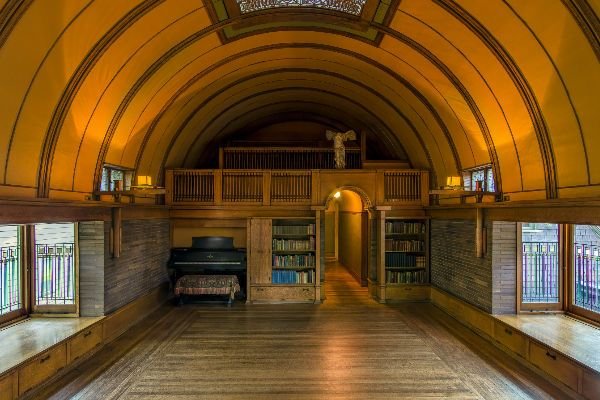 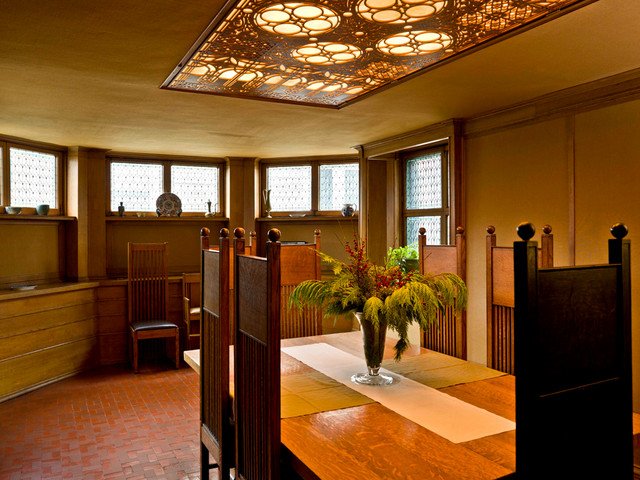 Frank Lloyd Wright revolutionized the field of architecture with his version of the now-called, Prairie School of Architecture. This house represents, by most accounts, his first masterpiece. He spent the first portion of his adult life in Oak Park prior to moving to Europe, thus this building and his nearby office stand as a monument to Frank Lloyd Wrights development as a world-renowned architect. It also demonstrates the development of Oak Park Village, a nearby suburb of Chicago.

Wright graduated high school in 1885 and in that same year his parents divorced -- his father left and never returned. Wright promptly enrolled at the University of Wisconsin to study civil engineering. However, to help pay for school, he took a job with the Engineering Department's dean where he met acclaimed architect Joseph Silsbee, of Chicago. He assisted Silsbee with the construction of the Unity Chapel.  Wright loved it so much, he dropped out of school (1887) to work for Silsbee in Chicago.

A year later, in 1888, Wright began an apprenticeship with the famous Chicago architectural firm of Adler and Sullivan. He worked directly under famed architect Louis Sullivan who, along with his rival Daniel Burnham, existed as one of the inventors of the Chicago School of Architecture and gave birth to the modern skyscraper. Sullivan was a proponent of the mantra, "form follows function," which greatly influenced Wright throughout his career. Wright worked with Sullivan until 1893 when Wright broke his contract by accepting private commissions to design homes.

The early phase of Frank Lloyd Wright's storied career centered on his Oak Park home and Studio—what Grant Manson has called Wright's First Golden Age. He resided in Oak Park from 1887 to 1909, before leaving for Europe. The final phase of his Oak Park designs was completed in 1911 and 1913. This building, along with his nearby office on Chicago Ave., represents the first phase of a career that grew even more spectacular in the next decades.

When Wright left Wisconsin for Chicago and the Oak Park neighborhood in 1887, the future suburb was rural and there were no streets leading directly to this property. The one structure included a small, Gothic cottage that served as his mother’s residence for many years. Although Oak Park was rural in 1887, its location was within easy commuting distance of the Chicago’s Downtown.

In a short time, Frank Lloyd Wright helped transform this rough-woods site into a home and finally a studio-office and residence. The complex of buildings was built, rebuilt, and added onto; the complex became the center from which his practice grew and from where he formulated his ideas for the "Prairie Style." As well, this location serves as the place where he began his family life.

In Lloyd’s early years, he developed his famous Prairie-house style (low horizontal structures with massive, overhanging roofs), which was a new style in modern architecture. The first house was modest and seemed to hug the ground, possessed a steep roof (in contrast to the typical hipped-Prairie roof that arrived later in his designs). The house also included many of the qualities attached to the picturesque Queen Anne style in both plan and elevation. Nonetheless, Frank Lloyd Wright put his own stamp on the design by employing an imaginative use of the inside space and showing a respect for nature; it was known locally as "the house with the tree through the roof."

It was in that first, small house that Wright planned his famous "Bootleg houses," which produced his break with famous architect Louis Sullivan in 1893. That year he added the large second-floor playroom. Not long thereafter, he designed and built his separate, yet connected, workshop and professional quarters on nearby Chicago Avenue in Oak Park. He also made other changes to the house to accommodate his growing family as well as his architectural staff.

In 1909, after the lauded series of designs had decisively established his reputation as an exceptional living architect, Frank Lloyd Wright in his fortieth year abandoned his life and work and left for Europe. He never returned to his studio on Chicago Avenue, although he designed several Oak Park houses in 1911 and 1913.  However, that would be the last time he did work for Oak Park Village.