Like many places in the American Southwest, Arizona maintained separate schools for African Americans and separated, barred, or simply discriminated against Mexican American children. African American children in many parts of the state attended classes alongside white children but faced discrimination. In Phoenix, neighborhoods with a significant number of black families maintained separate schools for white and black children. Union Colored High School opened in 1926 as a formally segregated school, changing its name to George Washington Carver High School in 1943. Ten years later, black parents secured a decision ending the city's official segregation policies. As a result, Phoenix was one of only a small number of cities that practiced segregation but ended the practice prior to the 1954 US Supreme Court decision in Brown v. Board, which struck down the doctrine of separate but equal. The building is currently used as the George Washington Carver Museum and Cultural Center. It was added to the National Register of Historic Places in 1991.

Front of the museum. 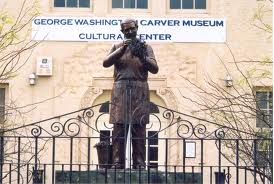 Entrance to the museum. (Photo by Nadine Arroyo Rodriguez-KJZZ) 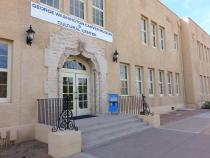 After integration was implemented after the Brown decision, Carver High School closed. It was then used for office and storage space for decades. This began to change in 1986 when for graduates of the school established the Phoenix Monarchs Alumni Association. The association bought the building in 1996 and grounds with the goal of opening a museum and cultural center. Parts of the building were renovated and updated in the early 2000s. Some of the former classrooms and offices were converted into galleries and the library is used for educational programs. Efforts to expand programming (in science, history, literature, and health and wellness) and conduct further renovations are ongoing as of 2017. Art galleries and a museum are also possible in the future.

Venue tours schedule: 3rd Saturday at 1 p.m. to 3 p.m. or on Tuesday by appointment.