This historic site was once a large, 5,100 acre sugar plantation owned by David Levy Yulee. Yulee, who was born in 1810 on the island of St. Thomas in the Caribbean, ran a very successful operation from 1851–1864. Before the Civil War, his success propelled him to the U.S. House of Representative and U.S. Senate. He was the first American of Jewish heritage to serve in the Senate. He returned to Florida after it seceded from the Union. His mill provided sugar products to the Confederate Army and his house served a a supply depot. A Union naval force burned the house down in May 1864 but the mill was left intact since it was a good distance from the house. However, all that remains of the mill is the 40-foot chimney, the iron gears, and the cane press.

The ruins of the Yulee Sugar Mill 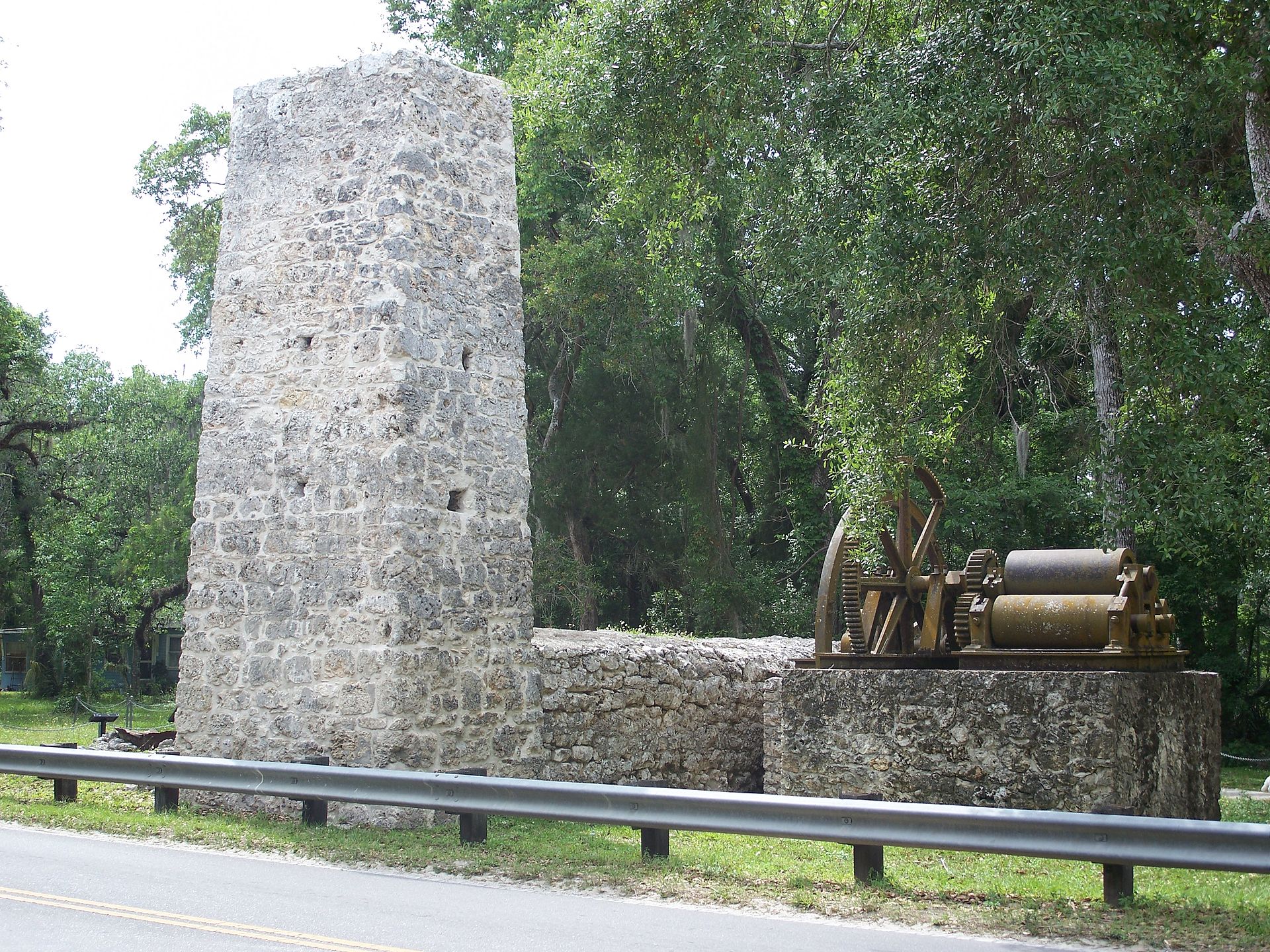 The Yulee Sugar Mill Ruins Historic State Park are the remains of a 5,100-acre sugar plantation located in Homosassa, Florida. Built by 69 slaves, the Yulee Sugar Mill turned sugarcane from the plantation into sugar, to be exported from the Homosassa River to ports along the Gulf and Atlantic Coasts. The mill was owned by David Levy Yulee (1810–1886), an American politician, attorney, businessman, territorial delegate to Congress, and first Jewish member of the United States Senate.

Yulee, was born in 1810 on the island of St. Thomas in the Caribbean and was of Moroccan-Jewish ancestry. He ran the successful "Margarita" sugar plantation from 1851–1864. From 1855–1866, he served as president of several companies, including the Florida Railroad Company. He played a major role in bringing railroads to the state and was dubbed the "Father of Florida Railroads."1

Prior to the the Civil War, Yulee was serving in the U.S. Senate. Known for his pro-slavery rhetoric, Yulee returned to Florida after it seceded from the Union in 1861 to support the Southern cause, even serving in the Confederate Congress. His sugar mill and home supplied the Confederate Army. In 1864, A Union naval force conducting a raid up the Homosassa River burned the down the house/supply depot after being fired upon by Confederates. Owing to its distance from the house, the mill was left intact. After the war, Yulee was captured and imprisoned at Fort Pulaski for several months for supporting the South.

Yulee's plantation covered more than 5,000 acres and produced sugarcane, citrus, and cotton. It was worked by 1,000 enslaved African Americans. The mill structures were constructed from Florida limestone, brick, and wood. It produced sugar, syrup and molasses. Machinery for the mill came from New York, brought in by ship. A high-tech steam engine drove the grinding rollers. Also on site were large kettles for cooking down the sugarcane juice produced nearby. At its height, the mill was worked by over 100 slaves.

Today, all that remains of the mill is the 40-foot chimney, the iron gears, the cane press, and some of the other machinery. The structures have been partially restored and are now part of the Yulee Sugar Mill Ruins Historic State Park. In 1970, the National Park Service added the ruins to the National Register of Historic Places. Visitors can tour the site, guided by informational signage that explains the operation of the mill and Yulee's antebellum plantation. Admission is free.

Open every day, sunrise to sunset