This area where "Fort Lane" was located is now known as and called Fort Lane Park. This is where the Second Seminole Indian War, 1837-1842, was fought by the United States to drive the Seminole Indians from the peninsula of Florida. Today, Fort Lane Park is an ideal place for family reunions, picnics, casual weddings, outdoor events, primitive camping. The park is constructed on two sides: the front and the back. 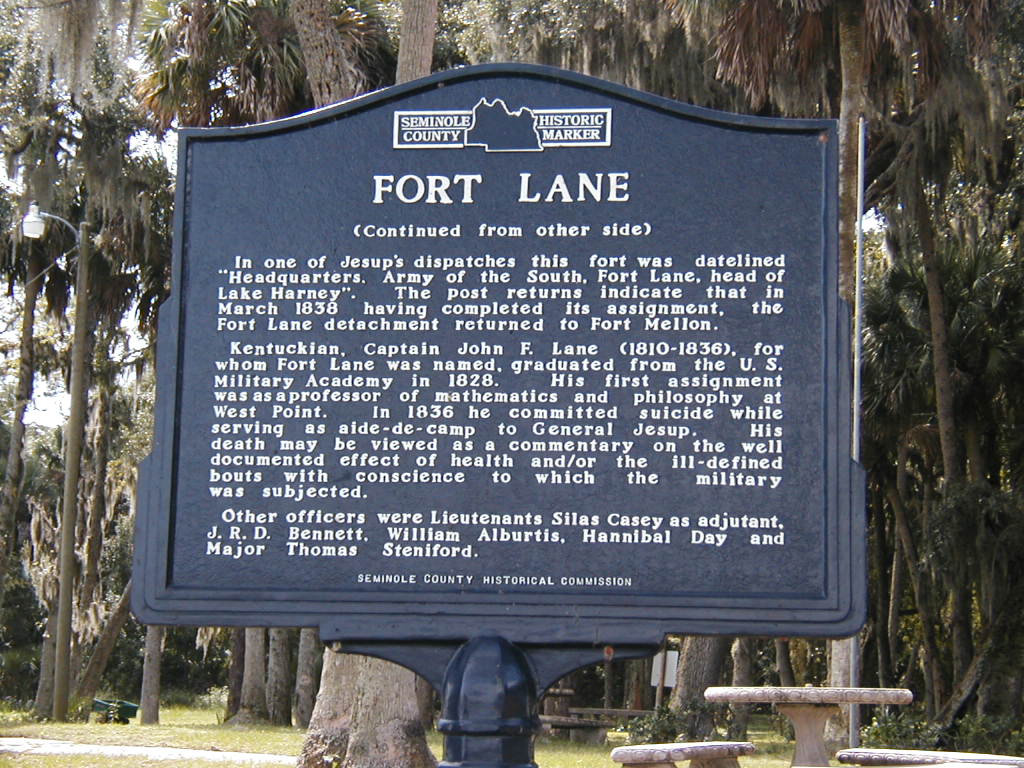 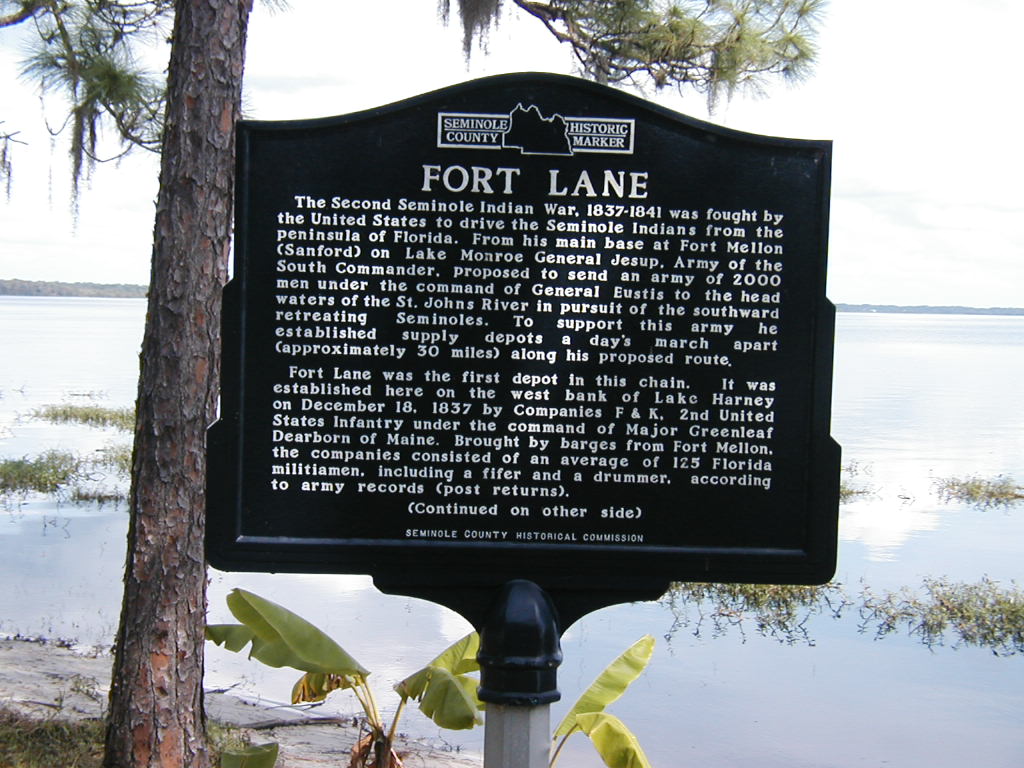 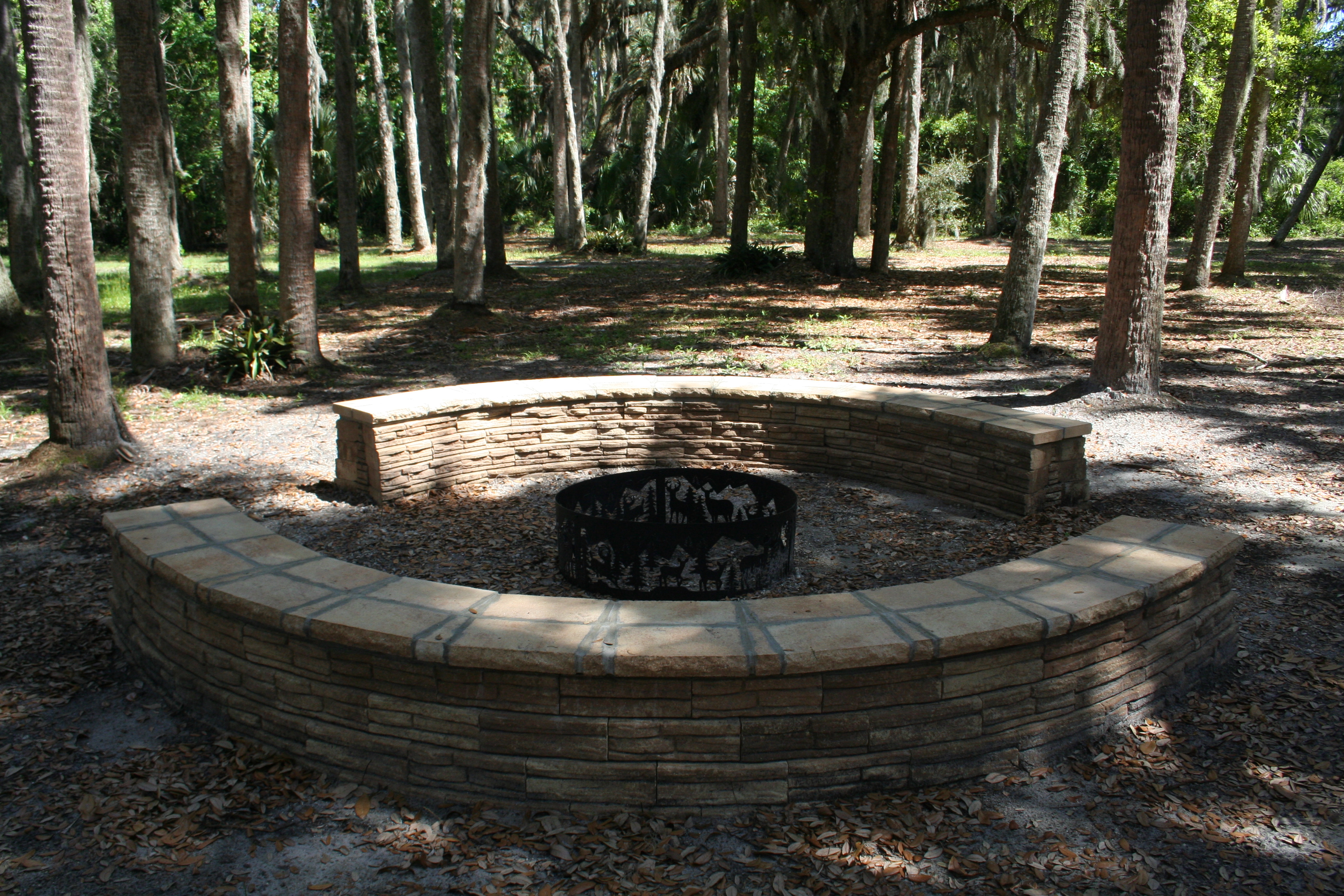 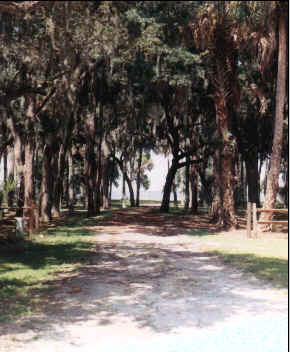 Fort Lane Park is a historical park located at Geneva, Florida, right by the east coast of Florida. The park is mostly composed of earth and water; it's not much of a site to look at, but rather, to appreciate. There are plenty of trees and trails, and there is a lot of vacant space to observe the park and view its land. Structures are built to give convenience and enjoyment to visitors such as an outdoor campfire ring and a pavilion. Many events take place at the park, i.g. weddings, camps, picnics, reunions, and general gatherings. Also, the artifacts found there are submitted to the Geneva Historical Society for display. The Museum is only open on the 2nd and 4th Sunday of every month.

Fort Lane Park has two sides to it. The first is John F. Lane. Fort Lane Park is named after John Foote Lane, who served as Captain in the U.S. Army 2nd Dragoon Regiment. He was an engineer and mathematician, and taught math at West Point. He was heading to Fort Drane, Florida with his soldiers and Creek Indians for the purpose of engaging the Seminole Indians. Shortly after he arrived, he contracted encephalitis (brain fever), which is inflammation of the brain due to an infection. He became insane and committed suicide by his sword. The second side of the park however, holds much more significance. The other side is dedicated to the Second Seminole War.

The Second Seminole War (1835-42) began when the United States government tried to force the Seminole Indians to migrate to the western frontier of the United States under the Indian Removal Act. The Indian Removal Act gave authority to the president -- who was Andrew Jackson at the time -- to grant western land in exchange for wanted territory, and that territory was the land where the Seminole Natives roamed. Although some Seminole Natives agreed to peacefully migrate, others refused to leave their home, whether or not the government's approach was peaceful. With both sides leading strong oppositions, the war commenced. The war lasted about six years, and over $20,000,000 in U.S. government money was spent on the war. In the government's desperation to win the war, they arrested Chief Osceola. He confronted the government peacefully to talk of peace and end the war. He later died in prison. For some odd reason, the U.S. government thought that would put a close to the war, but that just fueled the Natives with fury and resulted with a few more years of war after their chief's death. The war unofficially ended, although, no peace was truly made, neither by word nor treaty.

Following after the Second Seminole War was the Third Seminole War (1855). Huge conflicts between the Europeans and Natives arose, mainly over land, so yet another war was declared. U.S. soldiers patrolled the streets and was ordered to capture any Seminole Natives that they found, and the soldier would be rewarded. This decreased the Seminoles population by 200 people, thus, ending the war and ceasing future battles.

"By This Time Most Seminoles Had Been Removed From Florida, Relocated to Indian Territory Today's Oklahoma." The Seminole Wars. Florida Department of State. N.p., n.d. Web. 04 Oct. 2016.

From sunrise to sunset.