For over two decades, this planetarium has offered a variety of programs that connect students and visitors with the study of astronomy. The planetarium is also home to the Central Florida Astronomical Society. The planetarium is located on the campus of Seminole State College, which was established in 1966 as Seminole Junior College. From humble origins and eight portable classrooms, the campus has expanded to eighteen buildings.

The planetarium offers a variety of public programs on weekends in addition to serving the students and faculty of Seminole State. 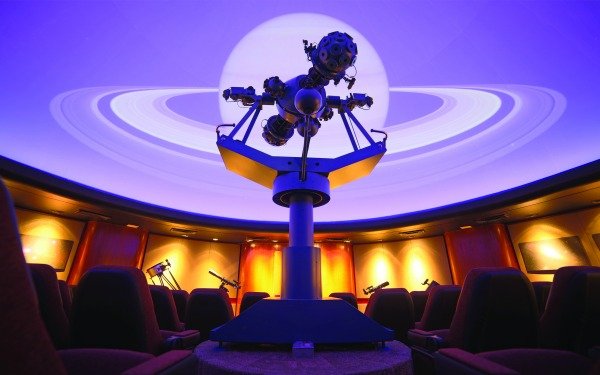 Seminole Junior College (SJC) opened its doors in 1966 with eight portable buildings and a dream. The college, originally called Seminole Junior College, was part of the State of Florida’s Plan to open 28 community/junior colleges that would provide access to 99% of Floridians (SFC, 2016).  It is part of the national expansion of community colleges that occurred because of the baby boom (Vaughan, 1985).

The 1960’s were a tumultuous time for America and especially in Florida. 1966, the year Seminole Junior College opened its doors, also represents the year that Florida finally ended segregated community colleges. The following year exploded with race riots around the country, and reached Florida in the June of 1967 in Tampa. The country faced many challenges at this time. In fact only a few years earlier, Orlando was preventing people of color from attending theaters and swimming in public pools and beaches (Porter, 2003). However, community colleges, like SJC, represented an oasis away from protests and riots. This is primarily attributed to the commuter nature of two-year schools and the propensity of students to be older, have families and attend college part-time (Vaughan, 1985).

By 1971, the attendance of Seminole Junior College had skyrocketed to over 7,000 students (SSC, 2016). From its inception, it has been the largest public college in Seminole county. Students were taking classes at the college 2 years before the University of Central Florida opened for students.

Seminole Junior College changed its name to Seminole Community College (SCC) in 1975. That year also saw the completion of phase 2 of campus construction and the explosive growth to over 14,000 students. At this time SSC was 4,000 students larger than Florida Technical University.

As SCC, the college continued its continuity under the leadership of Dr. Weldon, The school’s first president. The school continued to grow to meet the needs of the community. By the time he retired in 1995, the school bore little resemblance to the orange groves that Dr. Weldon selected thirty years earlier as the visionary location for the school.

During the 2000’s SCC faced another period of change. In 2006, SCC partnered with the University of Central Florida to establish DirectConnect path for alums to easily continue their studies at UCF. Three years later the school changed its name to Seminole State College, to reflect the fundamental shift from the two-year school model to the offering of Bachelor degrees. While controversial, this move reflects the longstanding goal of community colleges to the commitment of preparing its students for the work world. The detractors claim that community colleges strive to be all things to all people and that is a weakness. Industry on the other hand has been clamoring for better-prepared workers. Again, SSC is at the forefront of meeting the community’s changing demands.

Seminole State College reflects the social and academic changes that have occurred in the US, as well as the state of Florida, over the past 50 years. At nearly 20,000 students strong and growing, the school represents the community’s and the state’s commitment to higher education. In fact, Florida is in the top 3 states for two-year degree graduates.