Camp Shanks was a United States Army installation in the Town of Orangetown in Rockland County, New York. Camp Shanks officially opened on 4 January 1944 under the command of Colonel Kenna G. Eastman. The camp was named after Maj. General David Carey Shanks (1861-1940). At the start of World War II, the camp was the largest U.S. Army embarkation camp used during World War II, processing 1.3 million service personnel including 75% of those participating in the D-Day invasion. 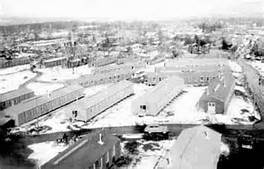 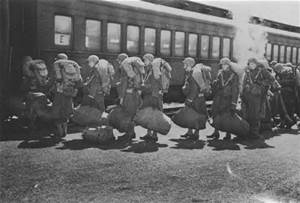 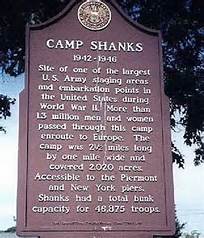 Local Orangeburg residents met at the Orangeburg School where they learned that their homes, lots, and farms were being seized for the immediate construction of a military camp. One hundred thirty families lost their homes. If the United States was to transport troops and equipment to Europe, it had to expand its military facilities around New York City. Camp Shanks was a rush job completed between September 1942 and May 1943.

At the start of war, no large depots existed in England from which soldiers could get their equipment. 1.They carried their essentials with them in their backpacks or barracks bags until the three staging areas on the eastern seaboard were constructed, Camp Shanks being one of the three. The other two were Fort Hamilton, Brooklyn, NY, and Camp Kilmer, New Brunswick, NJ. Combine the two staging areas with Camp Shanks, and it was the largest staging area in the world. During the second half of 1944, Camp Shanks was sending tens of thousands of troops overseas. One unit that came through Camp Shank was the 101st Airborne Division, 506th Parachute Infantry Regiment, E (Easy) Company. Embarking from Camp Shanks, New York in September, the 101st continued training in England until D-day, 6 June 1944, when its pathfinders became the first Americans to set foot in occupied France. Easy Company later became well-known in the Stephen E. Ambrose book Band of Brothers and a HBO miniseries by the same name.

Camp Shanks was the final stateside stop for soldiers who were processed through this staging area and prepared for departure from Piermont Pier to the European Theater of Operations during World War II. The soldiers knew they were headed overseas from there, which is where the nickname “Last Stop U.S.A.” came from. Camp Shanks also housed 1,200 Italian and 800 German prisoners of war between April 1945 and January 1946, with the first Germans arriving in June 1945. After capture, processing and transport all prisoners entered the United States at two points of embarkation, Norfolk, VA or Camp Shanks, New York. By the close of the war, 290,000 POWs passed through Camp Shanks as they were processed for return to their native countries. The last German to leave was on 22 July 1946. Camp Shanks closed in July 1946.

2.After the war, Camp Shanks was converted into housing for veterans with families attending colleges and universities in the New York City area under the GI Bill. Many of the personnel who had staffed the camp — doctors, cooks, teachers, and the like — and their families stayed in the village. The settlement, then known as Shanks Village, closed in 1954. The Village was dismantled in 1956.

Now Camp Shanks has a museum honoring those who have went through transit there. The Camp Shanks Museum, opened in June 1994 — the 50th anniversary of D-Day. Housed in a recreated Quonset hut barracks, the museum has photos, uniforms, music, movie posters, and other artifacts of the era. The museum, is located at South Greenbush Rd, Orangeburg, NY 10962 United States, and hours of operation are 12 – 4 pm, Saturday & Sunday.