Wilbur Bassett, took out a claim on land in the Four Lakes district near a lake that he gave the name Granite Lake. He also gave names to Clear and Silver lakes. He chose a spot near the same spring where 14 years earlier Colonel George Wright's troops camped before engaging the confederation of Indians in what we know today as the Battle of Four Lakes.

Roger's High School students placed a sign on the cabin in 1954. 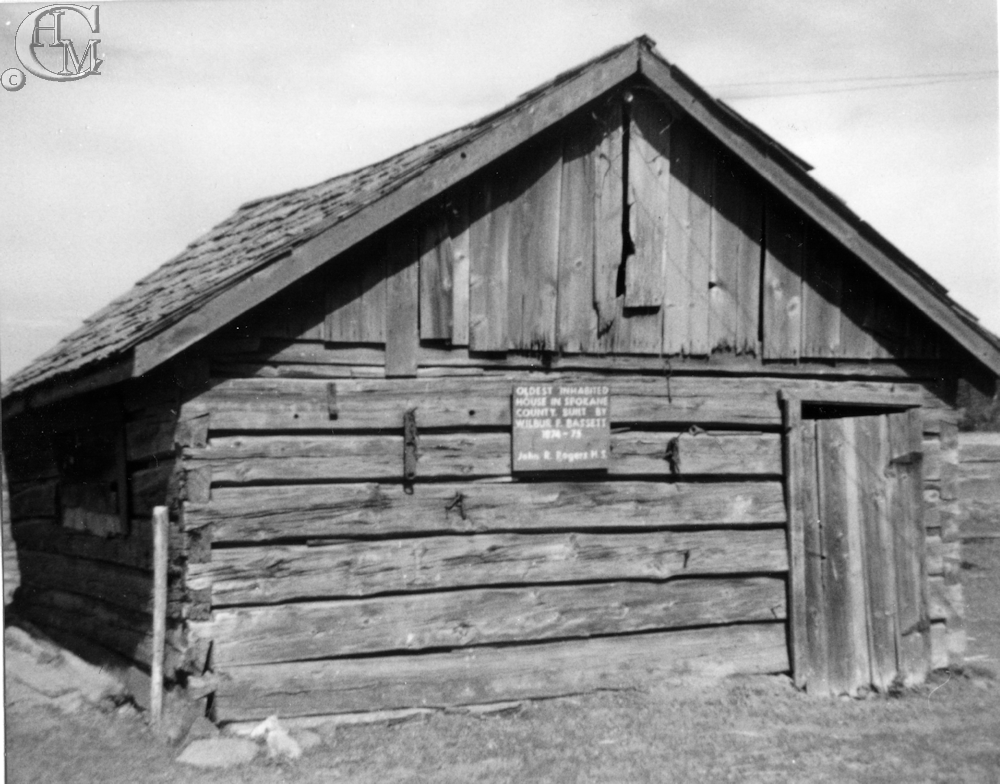 Sketch of the Bassett cabin

In 1871 Wilbur Bassett, his wife Adelia and son Herman traveled to Spokan Falls where Wilbur immediately found work building a sawmill on the river for Scranton and Downing.  The family of three shared living space in Scranton's 12 x 24 foot cabin which was near the sawmill.  Today there is a small monument marking the spot near the old Washington Water Power building by the falls.

While they were living in that cabin, their daughter, Minnie Maria Bassett was born on January 2, 1872.  She is reckoned to be the first white child born in the area.  That same year, Wilbur Bassett, took out a claim on land in the Four Lakes district near a lake that he gave the name Granite Lake.  He also gave names to Clear and Silver lakes.

He chose a spot near the same spring where 14 years earlier Colonel George Wright's troops camped before engaging the confederation of Indians in what we know today as the Battle of Four Lakes.

Wilbur's son, Herman later told a story of how James N. Glover offered his father a corner lot for free in what would become the center of downtown Spokane if he would build a house on it in order to make the town look like it was "picking up."  Herman reported that his father replied, "I don't want any of your gravel.  You can't grow anything on it.  I've got good soil where my farm is, and I can grow anything out there."

The family's original cabin burned down, and Wilbur built a second cabin on the same spot.

On July 19, 1873, young Minnie Bassett drowned in the creek by the family home.  Herman described what happened, "My sister, Minnie, the first white child born in Spokane, was drowned in the big spring on the farm on July 19, 1873, aged 1 1/2 years.  The spring was about 100 yards from where the cabin stood.  The soil had not all been broken, and the native unplowed ground toward the spring constituted a virtual flower garden at that time of year.  Minnie loved to pick these flowers and to play amongst them.  Mother had a hired girl at the time whose duty it was to watch the child, which she had been doing.  But at the fatal moment, Minnie had been out of her sight for only a moment when she missed her and began searching."

"When the search finally led to the spring, the child was found floating on the surface, together with a considerable number of flowers which she had been holding in her hand before she fell in."

"Father used his carpentry skill in making a coffin, mother lined it, and Minnie was lowered into the grave, located about 400 yards south of the cabin. Dad carved the initials "M.M.B." on a granite slab and placed it at the head of the first grave on the Bassett farm."

In 1873, a plague of crickets swept into the district, and for the next 3 years they ate everything in their path.  Wilbur Bassett dug a three-foot deep trench around his vegetable garden.  Each morning, before dawn, he and Adelia hauled in water to soak the inner wall of the trench to keep the crickets from crawling up into the garden.  It wasn't until 1885 when a wildfire swept through the grass on the plains that the crickets were destroyed and the plague was over.

The Bassett family suffered another tragedy in 1884 when their son, Chester Wilbur, died at six months of age.  He was buried next to his sister, Minnie, in an unmarked grave.

Granite Lake because of its high sodium bicarbonate and silica content was known in those days for its medicinal qualities, much like Medical Lake.  Farmers dipped their sheep in the lake to rid them of parasites. People bathed in the water and washed their clothes, rinsing them in the fresh spring water, or taking them home to dip in their own clear water.

Wilbur and Adelia were said to have friends among the Spokane tribe.  Indians would stop at the Bassett homestead to sharpen their knives and camas diggers on the grindstone, while traveling to camas beds to the west.  They also traded salmon and huckleberries for vegetables from the Bassett's garden.

Wilbur Bassett built a schoolhouse near his homestead where his children attended for a year or two, it was later named the Granit Lake School.  He then built a house in Cheney so that the children could attend school there.  While he stayed on the homestead, Adelia and the children moved to town during the school terms.  In 1885, Bassett built two houses in Spokane near today's 5th & Pine streets. One house was for a friend, while the other was used by Adelia and the children during school terms as they continued their education.

During their second winter in Spokane, Adelia and the children all contracted typhoid fever, likely from well water.  Adelia died of the fever at home.  Son, Wesley, was taken to Sacred Heart Hospital which was located along the Spokane River.  Unfortunately, Wesley died ten days later. The other children recovered.

Wilbur sold the cabin in 1888 and moved with his remaining three children, Herman, Jennie, and Bertha to his house in Cheney.

The Bassett homestead cabin was moved during the first part of the 20th century into the barnyard of what later became the Owen/McMillan farm.  The granite stone fireplace of the old cabin was not moved, and has since disappeared.

A fruit company planted the farm in orchards, and their hired Blacksmith used the cabin for a number of years.  The big red barn near the cabin housed the mules which hauled the fruit wagons. An extension for sheltering cattle was later added to the cabin, and a new roof was put on in the 1950s.

The cabin and gravesite are on private property. Permission is required before approaching the cabin.