Soldiers' Monument is an American Civil War monument on Worcester Common that honors the soldiers who defended the Union. Designed by Randolph Rogers, the monument consists of a tapering granite Corinthian columnn crowned by a bronze goddess of Victory, a three-tiered granite pedestal adorned with bronze plaques, buttresses surmounted by four bronze statues representing branches of the military at that time (Artillery, Calvary, Infantry, and Navy). These figures and the central pedestal are supported by a rough granite base flanked by four buried cannon barrels.

One of four sculptures around the base, this bronze statue commemorates the infantry.

The statue honors the soldiers from Worcester who fought for the Union in the Civil War. 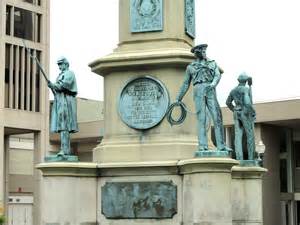 There are four relief plaques: the City of Worcester seal, the Massachusetts state seal, the United States seal, and a pair of crossed swords inside a laurel wreath, which set atop the pedestal. The middle tier has busts of U.S. President Abraham Lincoln and Massachusetts Governor John A. Andrew which includes a battle scene of a dying soldier supported by a comrade, and the monument's dedication plaque. The bottom tier has four inscription plaques with the names of the 398 Worcester soldiers who died in the war.

In 1871, the Soldiers' Monument Committee commissioned Rogers to design the memorial.  The City of Worcester donated $35,000, and $15,000 was raised by various programs. The monument was dedicated on July 15, 1874.

The monument is approximately 66 feet tall and the base is 24 feet square. Reconstruction was done on the monument in 1969 burying the granite base causing the monument to lose 4 feet of its height.