Dedicated in 1927, this marker commemorates the Battle of Cedar Creek, also known as the Battle of Belle Grove, was fought October 19, 1864 four miles north of the marker. This marker designates the location of a bridge over Spring Run that collapsed thereby delaying Confederate artillery pieces that might have altered the outcome of the battle. Cedar Creek marked the final victory of Union forces in the 1864 Valley Campaigns which pitted Confederate forces led by Lt. General Jubal Early against Union troops under the command of Major General Philip Sheridan. Sheridan's victory ended the final Confederate invasion of the North and helped Abraham Lincoln win reelection. 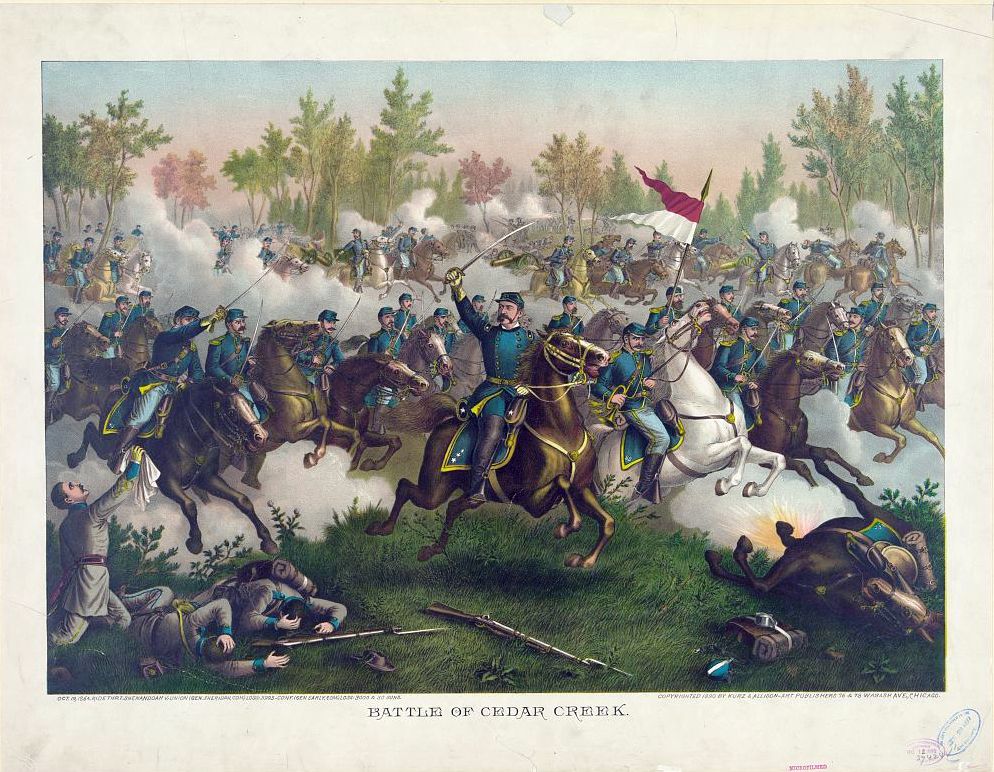 The effects of the American Civil War are still felt even today. History remembers battles such as Gettysburg and Fort Sumter, yet it is the smaller battles that brought some of the greatest changes. The Battle of Cedar Creek ("Battle of Belle Grove") in the Shenandoah Valley, fought on October 19, 1864, was a smaller battle that had significant effects on the outcome of the war. This conflict earned Philip Sheridan a promotion to major general in the regular army, aided the reelection efforts of Abraham Lincoln, and is credited for ending the final Confederate invasion of the North.

The Cedar Creek battlefield lies within Frederick, Warren, and Shenandoah Counties. Nearby is Signal Knob, the highest peak on the northern end of the Massanutten Mountain. It was from Signal Knob that Confederate officers scouted the encamped Union troops two days prior to the battle. Lt. Gen. Jubal Early hoped to crush Maj. Gen. Philip Sheridan’s Army of the Shenandoah and thereby reclaim the Valley for the Confederacy.

Following bold evening march, Early launched a surprise attack against Sheridan's army, which was encamped northeast of Strasburg. During the battle, Confederate troops forced the 7 Union infantry divisions to fall back, capturing prisoners and cannons. Early, however, failed to continue the attack north of Middletown. Foggy conditions, which had served to hide the Confederate advance, also hindered the fighting. The subsequent disorganization amongst the Confederate troops, in addition to the dramatic arrival of Sheridan on the battlefield, provided the Federals with enough time to rally.

By nightfall, Union forces had retaken all the lost ground and ended all future Confederate offensives in the Shenandoah Valley. The Union army entered the battle with 31,610 men and suffered 5,764 casualties (569 killed). The Confederate army began the fight with 14,091 troops and suffered approximately 3,060 casualties (1,860 reported killed or wounded). One fact of historical interest was that, at the Battle of Cedar Creek, future President of the United States, Col. Rutherford B. Hayes, commanded the second division of Gen. George Crook’s VIII Corps. Capt. William McKinley, the 25th POTUS, also served under the VIII Corps.

Today, over 1,450 acres of the Cedar Creek Battlefield are preserved as part of the Cedar Creek and Belle Grove National Historical Park. Civil War reenactors continue to use the field to educate future generations. On site are three monuments dedicated to survivors of the battle: a monument erected by the Veterans of the 8th Vermont in 1885, a 1907 monument from survivors of the 128th New York, and another from the North Carolina Historical Commission and the United Daughters of the Confederacy, dedicated in 1920 to honor the memory of Gen. Stephen D. Ramseur.