The George Washington Hotel is located in downtown Winchester, VA, near the Handley Library and the Museum of the Shenandoah Valley. Opened in 1924, the hotel has served as a popular gathering spot for locals and tourists alike. It once was the headquarters for the city's famous Apple Blossom Festival, and many noteworthy individuals have been guests at the hotel. A Historic Wyndham Hotel, the George Washington is still open for booking and includes amenities such as a ballroom, business and fitness centers, an indoor pool, and a casual restaurant. 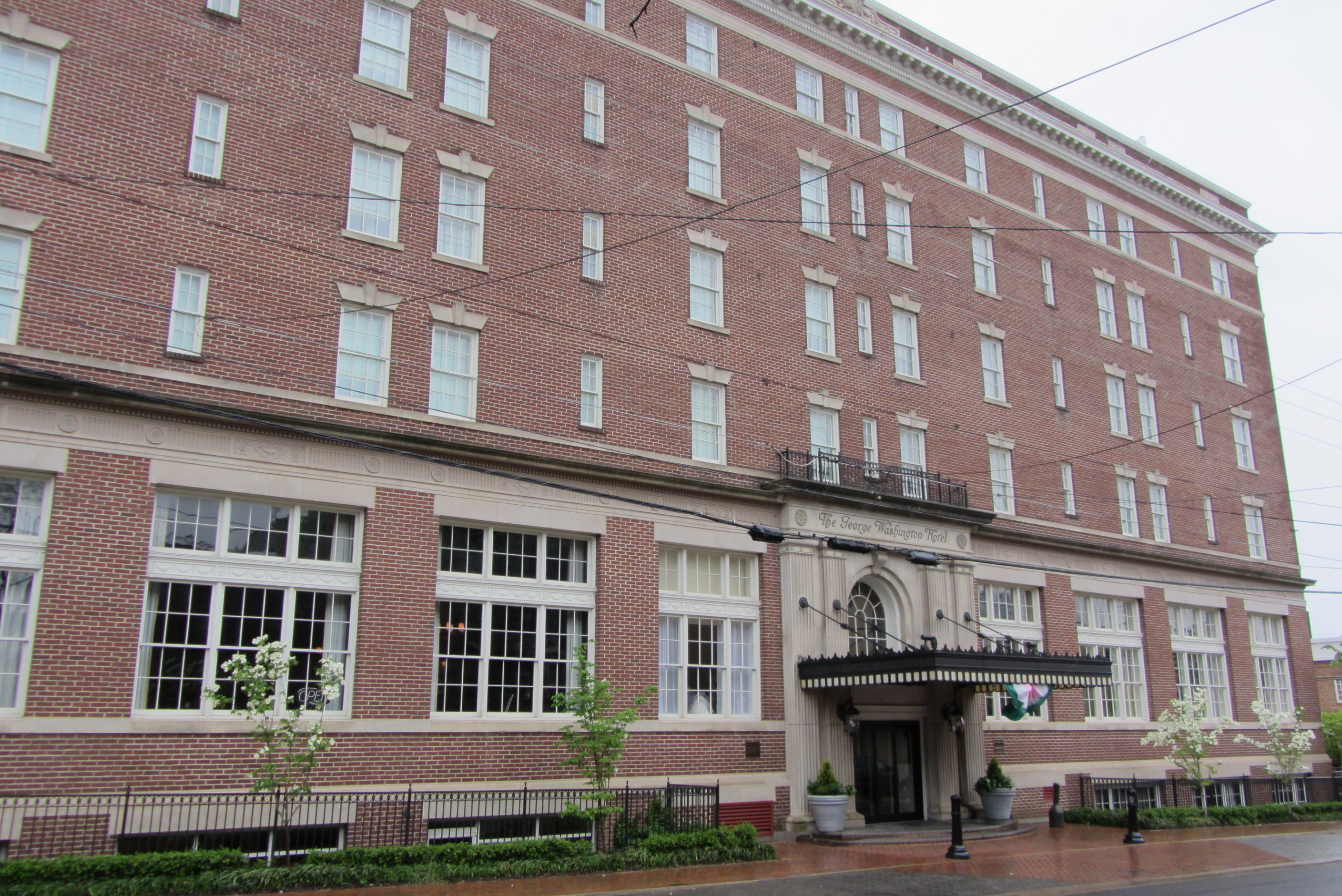 The George Washington Hotel is a historic hotel located in downtown Winchester, Virginia's pedestrian mall. It once served to accommodate the lodging needs of passengers of the nearby Baltimore & Ohio railway; the B&O station is still extant today. It was built in 1924 by the American Hotels Corporation as part of their “The Colonial Chain” of hotels. At 5 stories, it is one of the tallest buildings in the city. Originally, the hotel was designed in an L-shape and included a 1-story kitchen wing. The hotel was built using concrete columnns, beams, and walls, making one of the first examples of a “fire-proof” hotel. It had 102 rooms, 45 private baths, and amenities such as barber shop, cafeteria, candy shop, and men's furnishing shop on its Lower Level.

The George Washington Hotel is named for the first President of the United States, owing to his long association with the Winchester area. He served as a surveyor in Shenandoah Valley during his youth and, during the French and Indian War, had a Winchester office from which he ordered the construction of a chain of forts along the frontier, including Fort Loudoun. George Washington also represented Frederick County in the House of Burgesses.

Since its construction, the hotel has been extensively remodelled. The 1929 additions imparted its current U-shape, and in 1950, a Howard Johnson's restaurant with a new Cameron Street Lower Level entrance was added. Owing to economic circumstances, the hotel closed in 1978 and operated as The George Washington Home for Adults until 1993, after which it stood vacant until 2008. Wyndham took over the property and again renovated the structure, which now has 90 guest rooms, an indoor pool and hot tub, a fitness room, and The Dancing Goat restaurant. Despite the revitalizations, much of the original Colonial Revival and Neoclassical architectural style is preserved.

The George Washington Hotel is significant as a reflection of America's burgeoning identity as an independent nation, the country's development of an automobile culture, and for its role in local events which helped characterize the city of Winchester, Virginia. For example, as part of a program to promote tourism in the area, residents of the Shenandoah Valley formed the Shenandoah Valley Travel Association. The SVTA began hosting the Apple Blossom Festival in 1924, which was headquartered in the Lower Level.

Many individuals of note have visited the hotel, including celebrities such as Betty Crocker (who hosted an apple pie baking contest here), Lucille Ball (room #314), "Hopalong" Cassidy (and his horse), Colonel Sanders, and Jack Dempsey. When President Ford's daughter was the Apple Blossom Festival Queen in 1975, the hotel served as headquarters for the accompanying members of the Secret Service. Today, The George Washington Hotel is a Wyndham Historic Hotel and available for booking. The National Park Service added the building to the National Register of Historic Places in 2010.